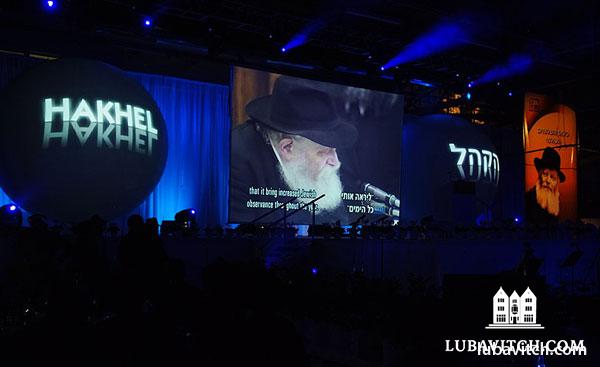 (lubavitch.com) As temperatures in New York City dipped to unseasonably low digits Sunday night, the atmosphere inside Pier 94 heated up. Well over 4,000 Chabad-Lubavitch shluchim, lay leaders, and supporters filed into the 175,000 square ft. hall for the highlight of the International Conference of Shluchim: banquet night. Attendees have been participating in workshops, round-table discussions, and informal meetings all weekend, but it is the banquet that brings it all together for a dramatic finale.

Aerial views of the packed room evoked images of the ancient gatherings in Jerusalem during the year of hakhel. The entire nation, including men, women, and children, would convene in the courtyard of the holy temple to learn and be inspired. Though the commandment is not observed in this manner today, the Rebbe emphasized the power united Jews hold during each hakhel year.

This year’s Conference, coming as it does in a hakhel year, captured both the essence and practicality of the Biblical enjoinder. Following the convention’s Monday finish, the Shluchim will organize hakhel events in their posts in 73 countries around the world.

“Wherever Jews are, there we find you, the Shluchim,” stated Yehuda Avner, the evening’s guest speaker and former senior adviser to five Israeli prime ministers. Avner spoke about his personal connection with the Lubavitcher Rebbe, who he says, “sparked a torch of Jewish renewal across all continents.”

Turning to the lay leaders, Avner implored them: “We cannot afford to allow Lubavitch to suffer because of the turbulent stock market."

“The more Lubavitch thrives, the more we are all enriched and we all thrive," he said.

There was no recession of passion in the banquet hall last night. Shluchim applauded their combined achievements, danced with a unique Chasidic fervor, and egged each other on to even greater heights. Between the speeches and sumptuous fare, guests table-hopped in an effort to see as many people as possible. For many emissaries, on lonely soil in Armenia or Azerbaijan, this conference and concluding banquet provide the year’s only chance to schmooze with friends and family.

Rabbi Moshe Bryski spoke about his decades serving the community in Conejo, California during his keynote address. His compelling stories highlighted the idea that, “hakhel is not merely an historic event; hakhel is a very real phenomenon today.” He charged his fellow Shluchim to “talk, bond, and inspire Jews, and to bring them together for something positive.”

That his colleagues are actively uniting Jews was apparent by the numbers of lay leaders who participated in a parallel conference and joined the Shluchim for the banquet. Together with these influential community leaders, the Shluchim had a chance to bask in their combined efforts during a stirring video presentation by Jewish Educational Media, JEM. The next generation of Shluchim, represented by an international group of 400 sons of Shluchim who enjoyed a convention of their own, sent a delegation to the banquet as well.

The venue for the banquet was striking as Rabbi Moshe Kotlarsky’s reminded the thousands of Shluchim that it was at this harbor that Rabbi Yosef Y. Schneersohn, the predecessor to Rabbi Menachem M. Schneerson, arrived after escaping Europe, to relocate and rebuild the movement’s headquarters.

The pier, a massive warehouse on the Hudson River, had its steel beams and concrete flooring decked in full glory for the evening. The white walls, chairs and carpet were a visually-compelling background to the thousands of black suits and fedoras filling the hall. Beyond the glitz shone palpable goodness, the accumulated good from years in the trenches.

The goal of the entire weekend, say convention organizers, is to give these heroes the encouragement to continue their holy work. Until next year, when they meet again.