When Do We Eat? 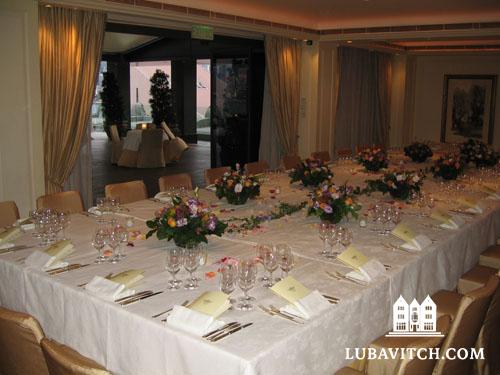 Getting ready for the Passover seder at the Peninsula Hotel. Kowloon, Hong Kong 2006

(lubavitch.com) It may not be one of the four questions, but it gets asked all the same, and this one needs to be answered before the Seder. Where will you be this year on March 29th?

If not at home or with family, might you be at a Chabad seder? There’ll be thousands of them worldwide, at established Chabad Centers in 77 countries, and in places far from civilization. Some will host a handful of guests, and others, like those in South-East Asia, several thousands.

Among them, to be sure, will be newcomers who have no experience with the Hagaddah. The details of a traditional Seder—typically a five hour affair, might be too much for first-time Seder participants.

It’s a concern that most Chabad representatives think about when conducting their Seders. But after years of experience, many have devised a formula that keeps guests interested, often lingering well beyond the Afikoman.

“I used one of the solutions from the Seder handbook issued by Merkos Headquarters,” says Rabbi Levi Groner, a Chabad rabbinical student who has experience conducting communal Seders.

A Seder in Russia, like the one Levi conducted last year, presents its own problems. Most of the Seder rituals may only be performed after sundown, and in Russia, that means no earlier than 8:30 p.m. But beginning a Seder at that hour is sure to keep many away, challenging Shluchim to find creative solutions.

“After Kiddush, we began the festive meal instead of having it at its customary place towards the end of the Seder. By the time we concluded, it was already dusk so we could proceed with maggid (the story of the Exodus), and we added another cup of wine.”

Other Chabad rabbis begin the Seder with lighting candles, discussions and talks until dusk, and then go through the Seder at an accelerated pace.

In Bangkok, guests will start arriving at the world’s largest Seder—known even to cabbies—an hour before it is scheduled to begin. “It’s an attraction, and everyone wants to take pictures,” says Bangkok’s Rabbi Nechemia Wilhelm.

In the initial years in Bangkok, flashes constantly punctuated the Seder (operating electronic devices during the holiday is forbidden by Jewish law). The solution? An early start, allowing ample time before the holiday for everyone to collect their facebook fodder.

There are other issues that come up, like conducting a Seder in a huge hall of a thousand people without the use of a microphone, prohibited on the holiday.

Rabbi Wilhelm, who is expecting upwards of two thousand, admits it’s hard. “I read the Haggadah at the top of my lungs while crossing from table to table. By visiting each table every few minutes, I can help everyone follow through the Seder at the same pace. Our venue has great acoustics, so that helps.”

Rabbi Dov Yona Korn of Chabad at NYU knows no ideal solution. “Our current venue is quite small; we’re filled to capacity. We even have people sitting on the window sills.” But his first Seders on campus were in a big hall, and getting his voice to carry was a problem. “I wheeled from table to table, and tried to have people at each table maintain the pace. For the Haggadah, I have everyone around the room take turns to read a paragraph in English.”

Parts of the Haggadah are long and can go for 25 minutes at a stretch with no interruptions. Giving guests a turn to read aloud seems to be a standard adopted by many Chabad rabbis, keeping Seder guests engaged.

In traditional homes, it’s rarely straight reading. “Everyone who discusses the story of the Exodus at length, is praiseworthy,” says the Hagaddah, encouraging a reading with interpretations and midrashic homilies, making a long affair even longer. But Chabad rabbis will be succinct. Rabbi Korn will interject brief snippets relating the Haggadah passage to contemporary life. Others find it necessary to abridge.

At the Bangkok Seder, things come to a high point at “Who Knows One,” in the Hagaddah. “Everyone dances on the chairs as they sing together. It’s unforgettable.” Wilhelm also invites all the children up to recite the Four Questions.

At NYU, students love it when the Korns’ youngest daughter reads the Four Questions. Other representatives have found that guests are delighted at the point in the Hagaddah when they get up and go to the door to welcome the prophet Elijah.

Rabbi Levi Groner hasn’t seen his family in a year now. Still he won’t be at their table in Australia on March 29. “Passover really is about family, and I that’s where I’d love to be—with my family,” says the rabbinical student studying in New York.

But there’s something extraordinarily inspiring about sharing a Seder with people who might not otherwise celebrate Passover. So like his 600 colleagues who will be traveling to various destinations next week as part of Chabad’s holiday outreach activities, Levi is packing his bags and heading off to bring Passover to Jews on an island in the western Pacific Ocean.

Last year in Russia, this year in Guam.

Next year in Jerusalem.

Levi Lesches reported for this article.