Walking The Walk Of The Chabad Emissary 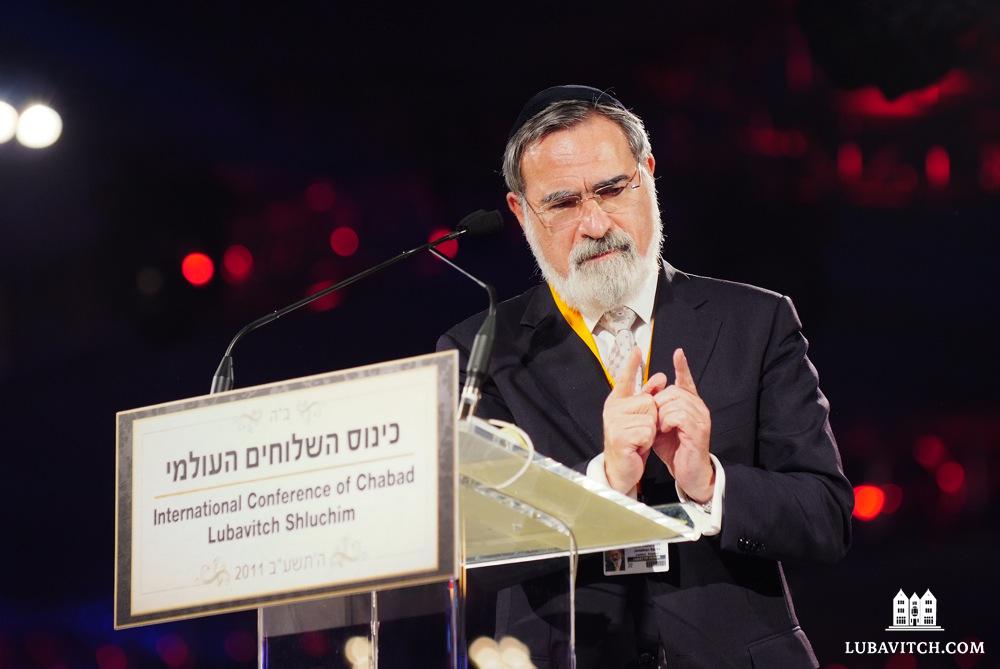 It’s that distinct gait of Chabad Shluchim that makes it easy to pick them out in a crowd, even in a crowd of black hats. A chipper confidence and a can-do spirit tempered by humble awe for the larger-than-life vision of the Lubavitcher Rebbe, and the role they play in its fulfillment. Hard to translate from the Yiddish, but that, in fact, was the theme of this year’s International Conference of Chabad Shluchim, which wrapped up Sunday evening.

Making the guest list of the banquet session were a number of well-known Jewish leaders who joined Chabad representatives. They listened intently as U.K. Chief Rabbi Lord Jonathan Sacks talked about the lessons he took from the Lubavitcher Rebbe, “one of the greatest Jewish leaders, not just of our time, but of all time,” in cultivating his own sense of Jewish responsibility and leadership.

In 1967, then a 22-year-old Cambridge sophomore, Sacks had come for an appointment with the Rebbe, hoping to get his responses to “intellectual and philosophical questions” then on his mind.

The young scholar hadn’t bargained for a challenge.

“The Rebbe gave me intellectual, philosophical responses to my questions. And then he began asking me questions. ‘How many Jewish students are there at Cambridge? What are you doing to reach out to them?'”

Caught unawares, Sacks tried to squirm his way out of the challenge and as any good Englishman would. “The English can construct more complex excuses for doing nothing than anyone else on earth,” he admitted, garnering laughter. So he tried to extricate himself from these questions, telling the Rebbe, “In the situation in which I find myself…” But the Rebbe interrupted him midsentence:

The Rebbe’s challenge, not to accept the situation, but to change it, “was a moment,” the Chief Rabbi said, “that changed my life.” It was his lesson No. 1 in Jewish leadership.

Rabbi Sacks’s 30-minute keynote address, packed with pithy lines and weighty ideas, was both an ode to the Rebbe and a powerful primer on Jewish leadership. He sought the Rebbe’s guidance at critical junctures in his educational and professional career, and gave up various ambitions to follow the Rebbe’s advice, to become a congregational rabbi and train rabbis because Anglo Jewry, said the Rebbe, was short of rabbis.

In the course of his career, the Chief Rabbi, who now holds three professorships, found all of his other ambitions fulfilled.

Lesson No. 2: “You never lose anything by putting Yiddishkeit first.”

Using his platform at the BBC, the Chief Rabbi took up the Rebbe’s campaign and began reaching out to non-Jews, teaching the Seven Noahide Laws. The experience, he said, taught him “not only the wisdom, the vast foresight of the Rebbe in understanding that the world was ready to hear a Jewish message, but it taught me — and I want you never to forget these words, that:

The banquet, at Pier 12 in the Brooklyn Cruise Terminal, drew people of very different backgrounds, among them non-traditional and non-observant. But concerns about anti-Semitism seem to cut across all differences. Indeed, there are, said Rabbi Sacks, “hundreds of organizations fighting anti-semitism.” But they fall short, he said.

“The Rebbe offered the most radical response to the Holocaust ever conceived, and I don’t know if the Jewish world still understands it.”

Lesson No. 4: “If you want to fight hatred of Jews, you must practice love of Jews.”

The banquet dinner for 4,600 came at the end of a five-day conference that brought Chabad emissaries from the far-flung parts of the globe together at Lubavitch Headquarters. A rare opportunity for them to draw more energy and inspiration for their life’s work, they spend a good part of the Conference sharing heart-to-heart conversations. For many, especially those in distant places where Jewish life is thin, loneliness is a constant. Fundraising pressures are another constant. And the Jewish education of their own children is still another hurdle.

That others take them for granted is a sign of their great success. But for Shluchim, it is only by living mindfully, always conscious and conscientious of their mission — to reach out in love to the Jewish people — that they feel empowered to continue despite the difficulties.

Leading the conference, Rabbi Moshe Kotlarsky of Lubavitch Headquarters explained this year’s conference theme “Es geht a Chossid.” Difficult to translate from the Yiddish, the idea is that one can identify a Chabad emissary by something as mundane as their “walk.”

It’s that carriage that exudes confidence and purposefulness, and a perpetual awareness that there’s yet more, so much more still to do. For those who remember, it’s a walk not unlike the steady, quick clip of the Rebbe’s gait.

“We will never manage to do it fully, but we will do our best to walk as he walked,” said Rabbi Sacks in his closing comments, exhorting his listeners to embrace Jewish leadership as the Rebbe did, by creating others who will lead, and by recognizing that despite Chabad’s great achievements in transforming Jewish life, the work is far from completed.

“In the silence of our souls we can hear what the Rebbe would be saying to us now: ‘You think you’ve done enough? There is always more of the mountain to climb.'”