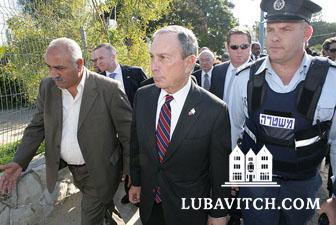 (lubavitch.com) Returning Monday from a solidarity visit to Israel, Mayor Michael Bloomberg held a press conference with the media and representatives of Jewish organizations in which he shared his impressions and personal feelings about the situation in Israel.

Bloomberg said he will personally remember the appreciation of the people in the street, the military and government representatives, “who were genuinely pleased that someone from the U.S. came to express understanding and solidarity” with them at this time.

Accompanied by New York City Police Commissioner Raymond Kelly and Representative Gary L. Ackerman of Queens, Bloomberg visited a safe pediatric ward in Barzilai hospital, where, among Israeli children, he also met two Palestinian children evacuated from Gaza to receive medical care in Israel, and other “Palestinian women who were pleased with the care they got from Israeli medical teams.”

In response to a question by Lubavitch.com about whether there are increased security risks to Jewish institutions in the U.S and New York in particular, given the anti-Israel sentiments expressed at recent protests, Mr. Bloomberg said that protestors represented “a handful of people out there,” and that the city does work with relevant parties whenever there is even “a remote chance” of any kind of terrorist threat.

“We are doing everything we can to prevent anything terrible from happening,” he told Lubavitch.com.

The Mayor spoke empathetically about the challenge to Israelis living with incoming rockets for years. “How would we adjust living in a war zone trying to raise a family?”

He was unequivocal about Israel’s need to use all its resources to defend itself. He was asked numerous times, he said, whether he thought it right that Israel should strike at innocent Palestinians. “It’s not Israel, but Hamas striking at innocent Israelis and using their own people as human shields,” he said.

Just trying to envision rockets coming into the U.S. without a response by the government, the Mayor offered, is “inconceivable.”

In answer to questions about a “proportional response,” Bloomberg said, “This is not a game, this is not theoretical,” and added that the first rule of going after terrorists is for a government to “use all their resources quickly and decisively.”

Rabbi Shea Hecht, of the National Committee for the Furtherance of Jewish Education asked the Mayor whether he was speaking as a Jew or as the Mayor of New York City.

“I don’t think you can separate the two,” said the Mayor. “The important thing,” he said, is that in visiting Israel, "I represented 8.3 million Americans, and perhaps the country, not just Jews.”