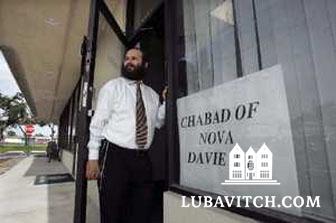 (lubavitch.com) In a landmark case heralded by religious rights activists, Cooper City, Florida was forced to admit its unlawfulness in preventing Chabad of Nova from opening its center. Five years in the making, this victory is particularly sweet as Rabbi Shmuel and Chaya Gita Posner have been looking for a permanent home since 2004 when they moved here to serve the 600 Jewish students of Nova University. Until this decision, that home remained elusive.

Last week, the city’s insurer agreed to pay Chabad and its lawyers a total of $800,000. Pending the city commissioner’s approval, Chabad will walk away with $330,000, including the jury award and 2.5 percent interest.

Franklin Zemel, a partner at Arnstein and Lehr LLP, served as Posner’s attorney during the two-year battle. “I am happy with the result of this case if other cities learn the lesson and don’t mistreat religious institutions,” said Zemel. “But I would be a lot happier if Rabbi Posner never had to go through this fight to begin with.”

Posner’s tale opens in 2005 when he founded a Chabad center for the University students. His problems began when he erected a welcoming sign a few weeks later. “We had been searching for a place near the campus, and when this vacancy in the shopping center opened, we grabbed it. Almost immediately, the sheriff sent us a list of citations.”

“They told us straight out, ‘you’re not welcome. You can’t operate a synagogue here, this is a place for business only,’” recalls Posner. “We approached the city a few days before Rosh Hashanah so that we could hold services for the High Holidays. The mayor didn’t want to talk to us.

After consultations with various prominent attorneys, and the recognition that his position was legally valid, Posner realized his only choice was to take the city to court. The suit was filed in 2007. Last summer, Miami U.S. District Judge Cecilia Altonaga determined that the city violated federal religious protection law when it twice changed its zoning codes to prohibit religious organizations from opening in commercial areas.

Though Chabad is the clear victor, Posner still has a lot of work to do. “People don’t want to be involved when you’re in the middle of a court case. It is very, very hard to rebuild, much harder than building from scratch.” For the past two years, Posner has held small gatherings in his home. Even with the award money, he does not know where he will be able to find a new property.

When he moved to town a couple of years ago, Neil Kirschbaum was looking for a synagogue during his stint at medical school. He met with a few local rabbis, and “got along well with Rabbi Posner and decided to stay.” Kirschbaum is a regular at Posner’s Friday night dinners and holiday events, but he recognizes that more of his colleagues would have joined him had Chabad been permitted a more central location.

“The inconvenience definitely made it more difficult. A lot of students come to a campus and don’t know to look for Chabad. But when it is in front of them, they come and start having a good time. It’s not like everyone becomes super-religious, but they get a good feeling for Judaism, for their heritage.”

“Chabad’s presence definitely has a huge impact on students.”

For his part, Posner is ready to get to work, on the important things. “I have no hard feelings. I just want to do the right thing. It is very unfortunate that we can’t find common ground to make the world a better place. After all, that is all we are here for.”