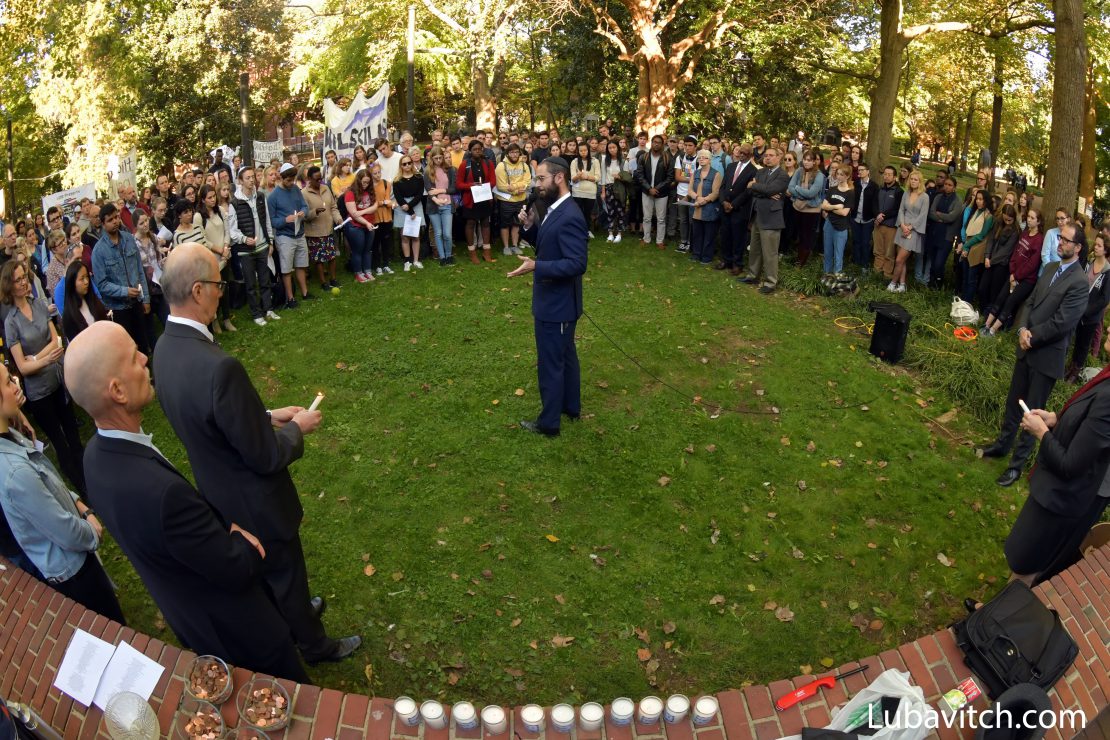 All News
By Tzipora Reitman , Nashville

When the Chabad rabbi walks the streets of Nashville, he’ll often be greeted by strangers. “Bless you, rabbi!” or “Bless Israel, we pray for you,” they’ll say. The friendly reception towards Shlomo Rothstein, Chabad emissary at Vanderbilt University, and his wife Nechama, also prevails on campus, where the college community values the presence of Chabad.

In this regard, Vanderbilt stands in sharp contrast to many other universities where anti-Israel demonstrations, anti-Semitic vandalism, and a general disdain for religious beliefs and practice make life difficult for Jewish students.

Vanderbilt hasn’t always been this way. About fifteen years ago, Jewish students made up only 4 percent of the enrollment at Vanderbilt. Maintaining a connection to Jewish life was challenging.

Then, in 2002, the university’s leadership made a conscious decision to increase its Jewish student enrollment, investing in a Jewish infrastructure by constructing Hillel’s Schulman Center for Jewish Life and expanding its Jewish studies offerings. Their efforts to market Vanderbilt as a good choice for college-bound Jews paid off. Word spread, and Vanderbilt rose in the rankings of top colleges for Jewish students. Most recently, The Forward’s college guide placed the university at number six.

Today, 15 percent of Vanderbilt’s undergraduate student body is Jewish (one thousand students). And Rabbi Rothstein serves as one of the university’s affiliate chaplains, along with another Jewish chaplain and six Christians.

In fact, interest in Jewish life at Vanderbilt has spurred a building campaign. One Friday night, the Chabad house was so packed with students that Rothstein had to turn away a group of twenty-five fraternity brothers. He vowed that would never happen again. Now, Chabad at Vanderbilt has reached the halfway mark of a $4 million campaign to build a sorely needed larger space, which will accommodate many more students and the Chabad House’s growing scope of activities.

And it’s not just the school and its students who appreciate Chabad—it’s the local government too. When the Rothsteins approached town officials with their plan to build a new Chabad House, their applications for zoning permits were approved at once. Unlike many Chabad institutions in other locales whose religious activities are ill-regarded when seeking building permits, Chabad at Vanderbilt was encouraged to highlight their religious functions in order to gain approval for variances. 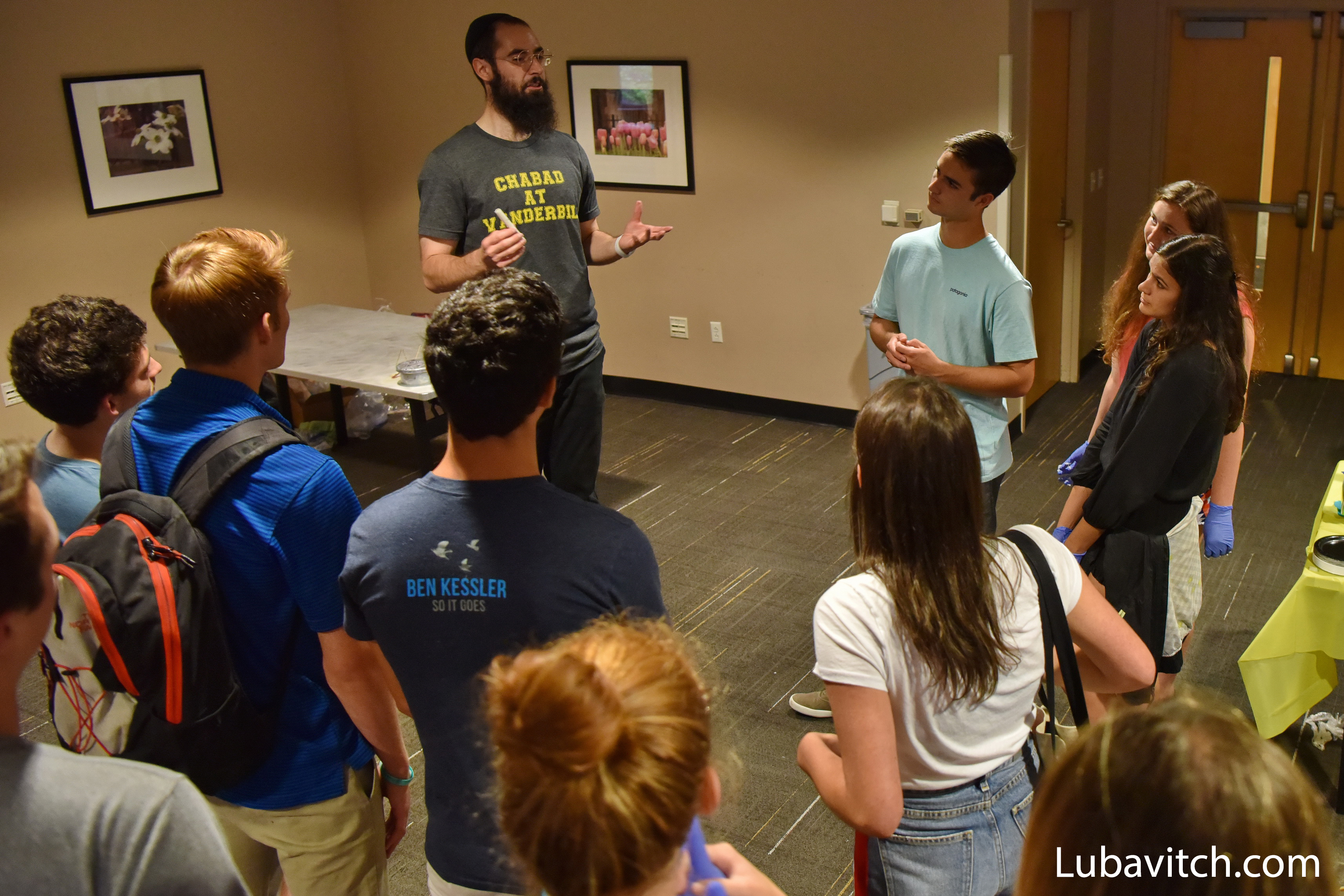 Rabbi Shlomo is all about sharing positive messages

Greek life is big at Vanderbilt. Only one of seventeen fraternities and sororities—Zeta Beta Tau—is Jewish, but the Rothsteins are popular guests at Greek houses, stopping by often to share a few minutes of “healthy messages driven by Chasidic teachings.” Over the course of two evenings, they may reach as many as thirteen hundred students.

Caitlyn Hann, president of Zeta Tau Alpha, isn’t Jewish. Still, she looks forward to the occasions when the Rothsteins visit her chapter and engage the others in conversations on “how to be better individuals” and share some lovely homemade challah. “Even though I do not come from the Jewish community, I enjoy their messages,” she says. “They challenge us to be our best selves.”

Now, several Greek houses of high-achieving, mostly Christian students, have invited the Rothsteins back for a series of longer, in-depth conversations.

Lessons in Emotional Wellness from the Torah—and the Trails

Emotional health is a major issue on college campuses. In a recent survey, 95 percent of college counseling center directors said the number of students with significant psychological problems is a growing concern on their campus.

“Students feel like they are drowning under stress,” says Nechama. “They are stressed over their academic workload, getting a job, and social issues. They are seeking guidance on how to cope, and Judaism offers the tools. We try to impart life skills and remind them of their inner strength.”

Shlomo adds, “The students want to make a difference, yet the world seems so overwhelming. How many people can really have a global impact? I share the Jewish concept that one good deed can tip the entire world towards goodness.”

Gianna Donato, a senior studying civil engineering and president of the Delta Delta Delta sorority, says, “Rabbi Shlomo encourages us to be mindful of our own well-being and the well-being of others. He consistently makes himself available as a resource and mentor.”

Kappa Sigma’s president, Rivers Cornelson, finds the Chabad rabbi’s insights widely relevant. “Rabbi Shlomo’s message about being deliberate with our thoughts and actions to influence the world positively goes beyond Judaism. It’s inclusive—everyone can get behind it.”

Speaking of getting behind, Cornelson describes trying to keep up with the rabbi on a five-mile trail run. “I got torched,” he reports. “The rabbi is in really good shape. He shared his technique of totally clearing his mind as he runs.”

For many students, what’s most inspiring is Rabbi Shlomo’s refusal to descend into pessimism—even when the news is at its bleakest. Ben Lackner, a political science and history major who was badly shaken after the Pittsburgh synagogue shooting, found some comfort in an email from Rabbi Shlomo. “I knew he would react to the shooting with sorrow for the senseless violence towards Jews, yet optimism for our potential to heal the world and effect positive change. His words brought some calm to a world that is chaotic, hateful, and violent.”

Lackner is among hundreds of students who identify the Rothsteins as an important source of guidance and compassion as they navigate college life and beyond.

“I take the lessons I learned at the Chabad House and translate them to my everyday life,” says Avery Taras. “Things like being a good person, connecting to others, and having the perspective to work through your own struggles.”

College officials applaud Chabad’s mission to inspire the broader campus by reaching out beyond the Jewish student body. Gretchen Person, an Associate University Chaplain and ordained Lutheran pastor, appreciates Chabad’s “shining example of kindness and service to others as an amazing force for good here at Vandy.” 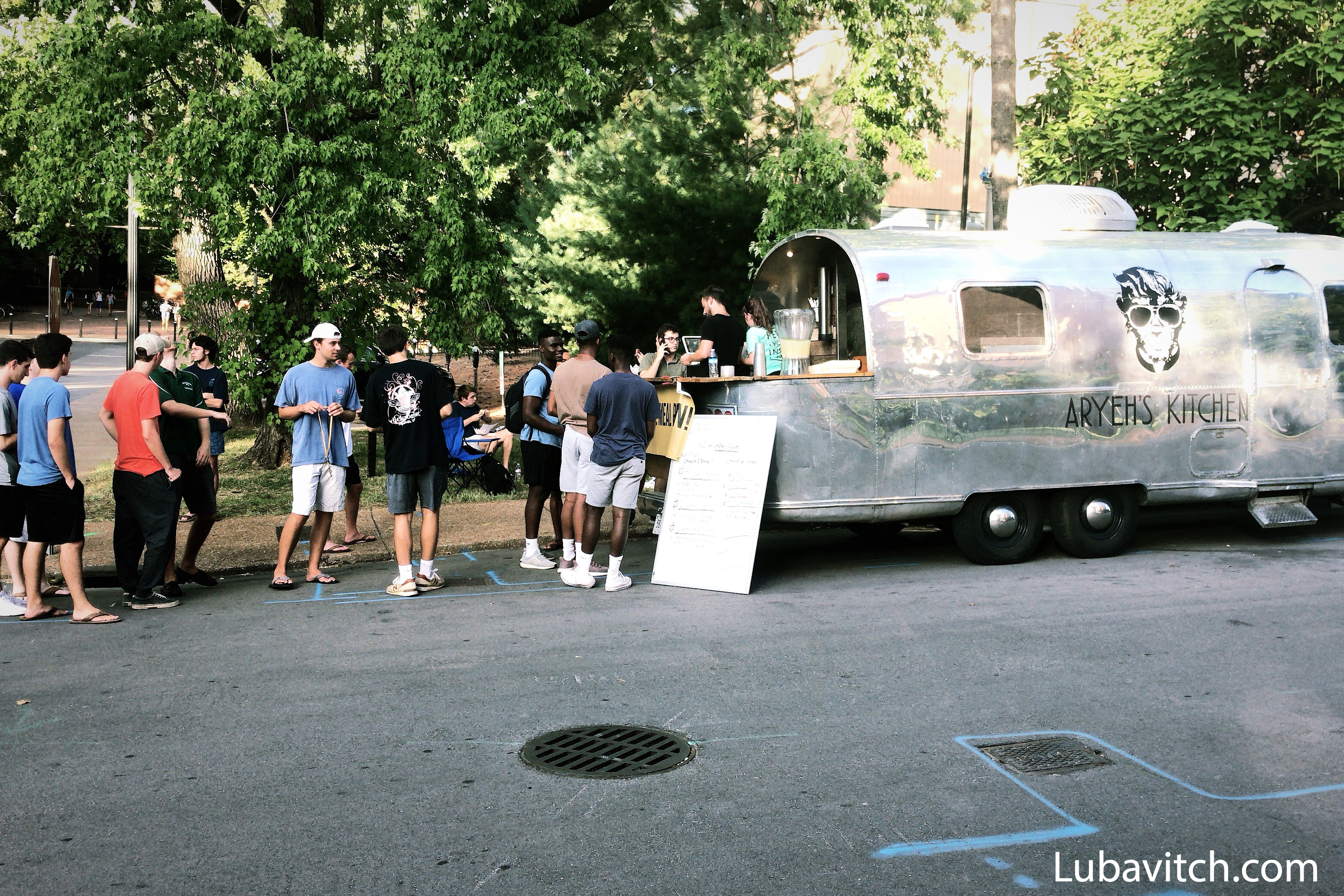 Southern Hospitality in the Kitchen

In another highly visible initiative on campus, Chabad at Vanderbilt is stirring the pot with Aryeh’s Kitchen, a kosher food truck operated by Rabbi Gavriel and Menucha Isenberg, who also direct programs for Vanderbilt’s two-hundred and fifty Jewish graduate students.

In a show of support for Jewish life, Vanderbilt includes the popular food truck in its meal plan. Approximately seventy students line up daily for kosher lunch with a southern twist. During a recent lunch break, students explained why they choose the kosher food truck fare over other choices on campus. “I’m not even Jewish, but the food tastes good, and that’s a big priority,” says senior Will Henderson. “It’s cool that it’s on the meal plan. It’s easy to get food and hang out—all my friends are chilling here.”

In the days after the Pittsburgh synagogue massacre, there was more than smoked brisket at Aryeh’s Kitchen. Patrons welcomed opportunities to wrap tefillin or pledge to do positive deeds with the hashtags #PittsburghStrong and #UniteWithLight.

Even while it reaches out to the broader campus, Chabad at Vanderbilt remains focused on serving Jewish students. And the personal relationships those students form with the Rothstein family endure long after graduation.

Arielle Matza, 27, who graduated in 2013, now works as a corporate attorney on Wall Street. For her, going to Vanderbilt meant leaving the predominantly Jewish environment of Long Island behind. And yet, thanks to the Rothsteins, that move actually brought her closer to Judaism. She describes Shlomo as “the most outgoing person I’ve ever met,” and says that she would often see him standing in the most heavily trafficked part of campus “holding the prop of whatever holiday it was.”

“I’m not religious,” she says, “but being so far from home, seeing Rabbi Shlomo, Nechama, and their children, welcoming people to their home gave me such a warm, nice feeling. I wanted to participate even more than I would have at home.”

The compassion the Rothsteins displayed towards her during difficult times cemented the relationship. “I went to their house multiple times in tears,” she says. ”They functioned as mentors and parent figures.”

“The Rothsteins made a huge difference in my life,” says Ben Wexler, 23. “They helped me out during incredibly dark times in ways I can never describe.”

Wexler paid it forward by promoting Jewish life during his post-college stint in the military. “I was the de facto rabbi of Fort Leonard Wood in Missouri during my short time in the service,” he said. “I was the first Jewish person that many people had ever met, and I influenced a lot of people to go to services.”

In words echoed by many other alumni, Matza says, “To this day, I can pick up the phone and call Rabbi Shlomo and know that I’ll feel better after we talk.” 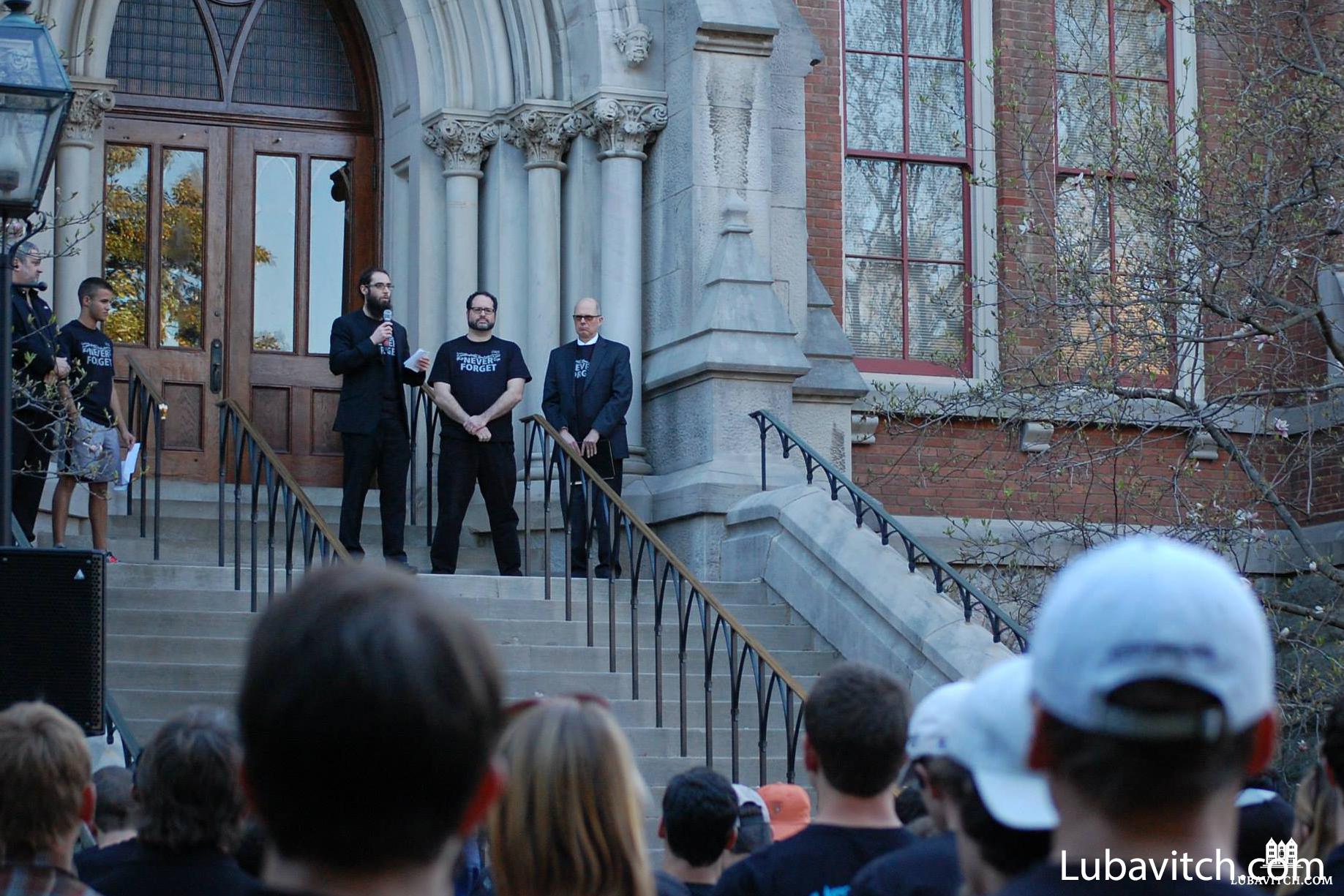 Rabbi Shlomo speaks at a rally on campus 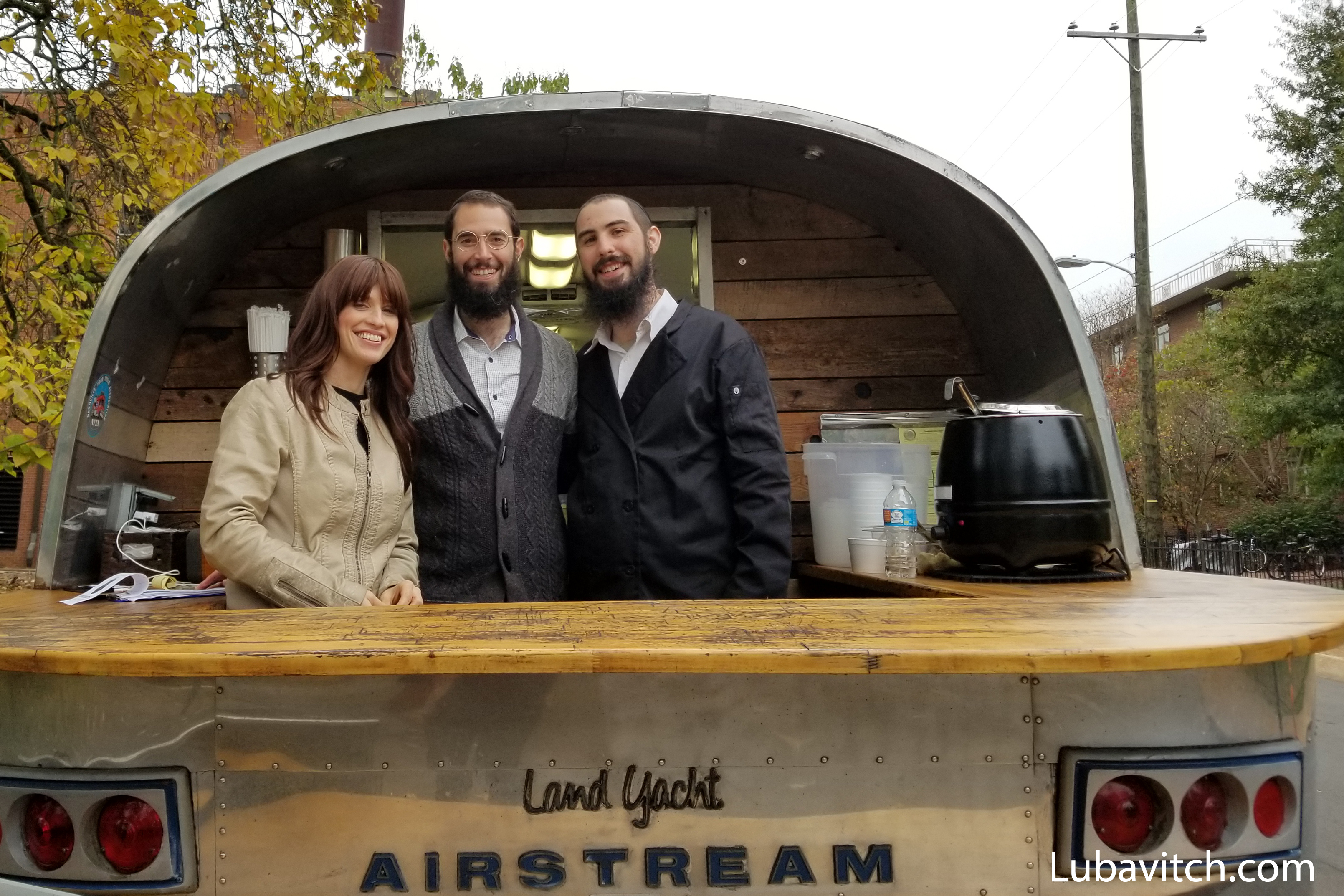 The Rothsteins with Rabbi Gavriel 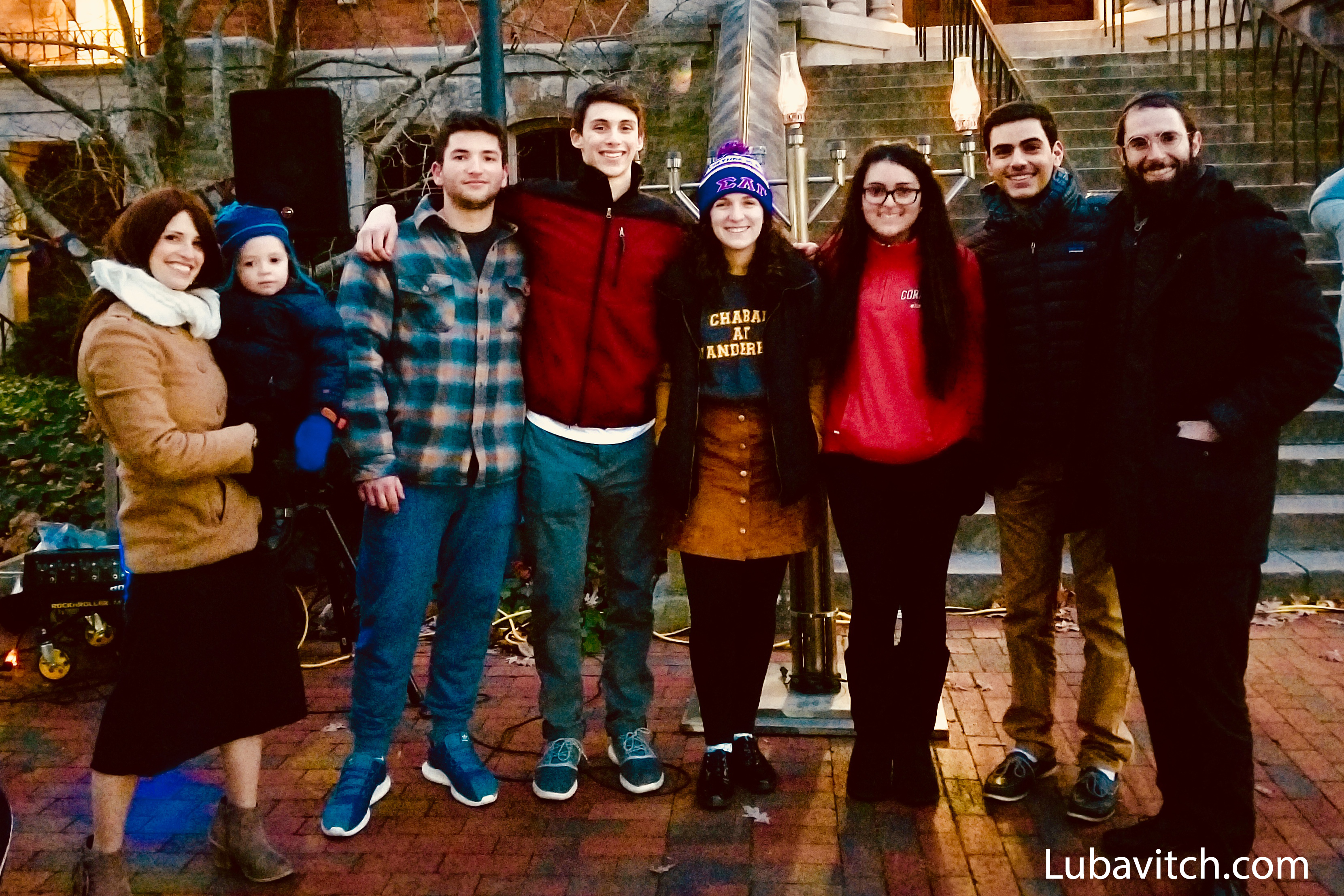 Chanukah on the ground