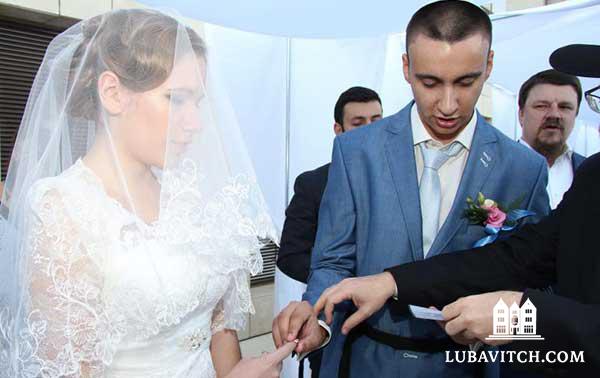 Living with uncertainty, Jews in the city of Dnepropetrovsk celebrated the Jewish wedding of nineteen couples. The group weddings, dubbed the Tents of Israel, were held on the upper roof terrace of grand-ballroom of the Menroah Palace in the Menorah Center complex, the world’s largest Jewish Community Center. The couples were married off in a traditional Jewish ceremony.

All of them had been legally married under civil law, byt they never had the benefit of a Jewish marriage, chuppah and kiddushin, and among them were both grandparents and young couples.

“Usually parents bring their children under the chuppah, however, during the Soviet era it was practically impossible,” said Zelig Brez, the director of the city’s Jewish community, calling the event the largest group wedding for the country, “miraculous.”

The city’s chief rabbi, Shmuel Kaminetzki and his wife Chana, educated the couples about the significance of the traditions and rituals involved in a Jewish marriage.

“It was logistically difficult to arrange all the details,” said Chaya Maltsev, director of the city’s Jewish Family Service and organizer of the event, “especially with placing special emphasis on making each couple feel that the day was uniquely catered to their needs. Yet it was well worth it.”

The weddings were made possible through the generosity of the Tsitsuashvili family.