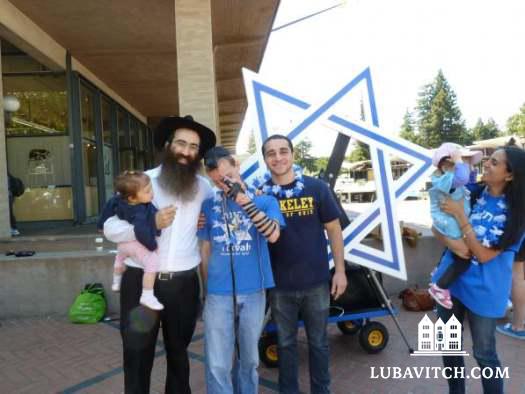 Known for its liberal activism, the University of California, Berkeley, consistently ranks among the top academic institutions in the country. For Jewish students, however, the school presents certain challenges.

Pro-Israel? Chances are you’ll have to deal with anti-Israel sentiment at some point.

According to a 2010 U.C. Undergraduate Experience Survey, three percent of Berkeley’s 26,000 undergrads identified as Jewish, while unofficial counts put the total somewhere between 7 to 10 percent. Either way, for Jewish students, especially those who proudly identify with their heritage, being a tiny minority is the tradeoff for a stellar education.

Luckily, students have some strong shoulders to lean on and learn from. Rabbi Gil Leeds and his wife, Bracha, directors of the Rohr Chabad Jewish Student Center at the University of California, Berkeley, since 2007, were themselves students at Berkeley not too long ago.

“I personally believe G-d put me in this position for a reason,” said Bracha. “And given that my husband and I were students here, there’s an element of relatability that we bring to our work and that makes students open up easily.”

An official student organization, the Chabad Center, which embraces students from a wide range of political affiliations, is particularly sought out by those who want to express Jewish pride and support for Israel on a campus where students don’t often “feel safe doing that,” Bracha explained.

Sophomore Michaela Fried is a regular at the Leeds’ Shabbat table and learning programs. Fried is especially grateful, she told lubavitch.com, to have as a resource “a rabbi and rebbetzin to talk to 24-7. And during divestment, and when anti-Israel sentiment is higher than usual, it’s a great place to go and hang out.”

Exploring Judaism Through Study and Participation

Students can be found at the Chabad Center almost every day of the week as the Leeds offer a full slate of weekly classes on Jewish philosophy, Hebrew reading, Chasidic insight into Torah readings, and the always popular relationship class. Bracha runs that class for women, while her husband teaches a similar class for men. Once a year, they offer a joint lecture that anyone can attend. In those classes, the Leeds discuss Jewish perspectives on dating, the idea of a soul mate, the customs of Jewish engagements and marriage, and Jewish family life.

According to Bracha, the students who attend programming at Chabad bring the same high-caliber interest and discussion to their Jewish studies as they do to their academic majors.

“These are students who are academically driven, and during our Sinai Scholars courses, they’ll debate big issues like the existence of G-d, the authenticity of Torah, or the convergence of science and Torah,” said Bracha.

Isaiah Soval-Levine, who graduated from Berkeley law school and now works in Istanbul, was a regular at Chabad during his years there. “[The Leeds] are easily approachable and make guests and friends alike feel welcome in their home,” he said. “They are the kind of people who make you want to get involved with Chabad classes or dinners because they are so enjoyable to be around.”

Also popular are Friday-night Shabbat dinners, which draw between 80 and 120 students.

The informal ambience at Chabad allows students to unwind after a stressful week, and this is where they come when they are looking for advice on matters of the heart.

“Students will come here to talk to us about relationship issues, about dating and marriage, and when they need help after a break-up,” said Bracha. “They also want to understand what’s wrong with intermarriage,” an issue that comes up frequently for students here.

Been There, Done That, Say Chabad Reps at Berkeley

Neither Gil or Bracha were raised in the Chabad community, but they’ve turned that to their advantage as they reach out to students. As a psychology major at Berkeley, Gil became intrigued by Chabad philosophy when he realized that all the things he was learning about the human psyche and the subconscious in his psychology 101 class were already articulated in the Tanya some 200 years ago. Bracha grew up Conservative. As a freshman, she went out of her way to avoid the Chabad rabbi on campus.

“Part of it was the way I was dressed,” she recalled. “I knew it wasn’t the way to dress in front of a rabbi.”

When friends asked her to accompany them to Chabad for Shabbat services, she was adamantly opposed. “My reaction was no way. I would never be caught dead there,” she said, explaining that she thought they wouldn’t respect her as a woman. “I had grown up egalitarian and I had a lot of misconceptions and ideas in my head about how the Orthodox community viewed me.”

When she finally relented to her friends’ request, Bracha found she had a good time. Soon she was taking a class on Jewish philosophy at the Chabad Center and eventually she reasoned that the “Jewish chain of tradition was more scientific than many of the so-called scientific theories I was learning in class. It was a turning point for me because it shifted my theory and helped me realize the Torah is infinite and there is so much to learn. I had thought with my seventh-grade Hebrew-school education, I had learned everything I needed to know.

“I came to the realization that I hadn’t even scratched the surface,” she recalled.

Her own experience as a college student now informs her approach, “never to give up or write someone off as ‘not interested.’ You really just never know who may be interested and when the right time may be for someone to choose to connect to being Jewish.”

If, as students say, the Leeds’ Chabad House serves as a second family, the Leeds credit to the Ferris family, Chabad emissaries who’ve been serving the greater Berkeley community for years and have planted the seeds that have made their work possible.

“The Ferrises were pioneers here. They’ve paved the way here for us and they continue to serve as mentors. As students, we participated at their beautiful Shabbos table filled with guests who represented a really diverse cross section of Jews, and now we’re modeling ours on what we learned from their warmth and love that so inspired us.”

Soval-Levine, said he’d like to “import parts of the ‘Leeds model’ to my personal life in Istanbul where the community is small and not particularly observant. It would be wonderful to create a group of young Jews celebrating Shabbat together, and if it could replicate half of the warmth of a typical Leeds Shabbat, I would consider it a great success.”