Two Jews and a Podcast 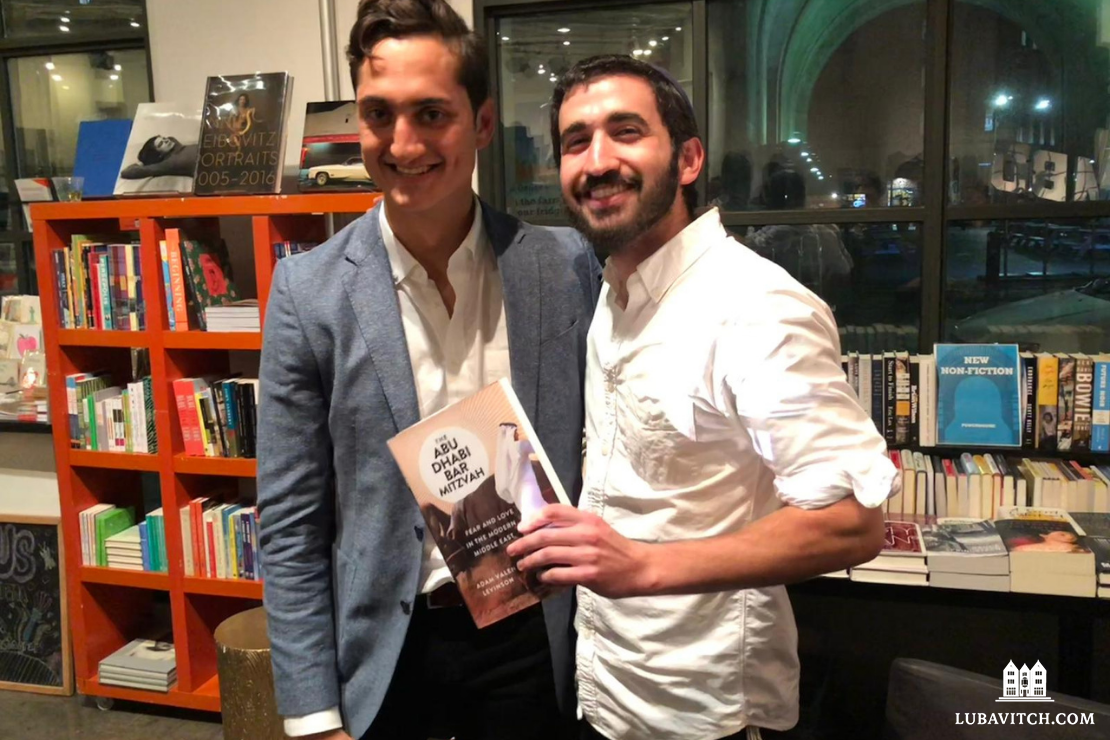 Adam Valen-Levinson wasn’t looking for Judaism in Shanghai, China, and he definitely wasn’t thinking about starting a Jewish podcast.

He wasn’t raised observant. In fact, the first time he laid tefillin was as a 21-year-old in the United Arab Emirates, a story he tells in his book, The Abu Dhabi Bar Mitzvah.

Adam, who is currently working toward a Ph.D. in cultural sociology from Yale, was in Shanghai one summer, back in 2017, studying standup comedy scenes across the globe and performing himself too. That’s also where his Jewish studies began.

A fellow American friend had invited him to Chabad for a Friday night dinner and he went to check it out. There he met Indiana-born Dovid Grossbaum, then a rabbinical student filling in for the local rabbi. The two immediately hit it off. Dovid attended Adam’s standup gig the next night and they stayed in touch even after Dovid headed back to the States.

Then Adam ended up in New York, where Dovid was studying, and the two began meeting up to learn and discuss Judaism. “We’d study some of the classic Jewish texts but end up having these long conversations and get into philosophy, and life in general,” says Adam. Sometimes others would join them. “We’d have these deep, two-hour free-flowing conversations, branching out into all these different ideas. It’s the kind of conversations you don’t get a chance to have otherwise.”

Adam’s travels soon took him abroad and Dovid married and took on a role at Chabad of Indianapolis, but the two stayed connected, meeting over the internet. “We talked about wanting to share these conversations with others,” says Dovid. “We felt like there was something in it that might be interesting to them.” They bandied about the idea of turning their chats into a podcast.

It took some time, but in June of 2021 they launched “The Zal,” a podcast named for the traditional study halls found in yeshivahs across the globe. “Yeshivah zals aren’t classrooms or lecture halls,” says Dovid, “They are homey spaces, for individual or group study, where you feel comfortable with yourself, with your Judaism and with your exploration. There’s certainly deep study that happens in a zal but there also ends up being conversations and coffee breaks. It evokes a study that’s less structured, more informal.”

The typical episode follows a similar approach: Dovid will open the conversation with a Torah passage or concept. They’ll discuss the idea. Adam will push back on an assertion. Dovid will bring up a possible solution. Adam will bring up a different one. They’ll go off on a tangent. There will be lots of chuckles, self-deprecating humor, ironic observations, and pop culture references. The conversation will be interrupted by a kitschy imitation commercial. It will not follow a script or outline.

On its thirteenth episode as of this writing, the podcast has garnered an average of 250 listeners, mostly from Dovid and Adam’s circle of friends and acquaintances. Some of the audience isn’t Jewish. “There’s a high barrier to entry because of its religious label,” says Adam. “But people who jump over that have a fun time being exposed to this kind of Judaism and Jewish thought. They realize just how broad Judaism is and how Jewish concepts can really be relevant to anyone. It bridges a wide cultural gap.” It’s Jewish thought in modern, casual language.

Adam knows his friendship with a Chasidic rabbi raises eyebrows, but that’s only until the eyebrow-raisers actually listen to their conversations. “They realize that our relationship isn’t just a tokenized one, like ‘look at this black-hatted friend I have,’” he says. “I’m happy to share our friendship and I think the same reason it’s meaningful to me is what makes it meaningful to everyone listening in.”