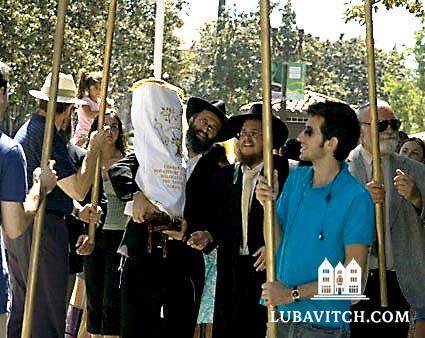 Slipping from USC fight song into the Jewish pride anthem “David Melech Yisrael” threw trombone player Nathan Tiras for a few beats. He and nine other members of the famed USC band regained their musical footing in time to march the Chabad at USC’s Torah to its new home in style.

“We felt connected with the group marching in the procession,” said Tiras, a sophomore majoring in International Relations. “They were singing and enjoying themselves, and we eventually figured out how the music was supposed to be.”

To draw participants to University of Oregon’s Torah parade on Wednesday, Matt Peterson, a proud possessor of a brand new Environmental Studies degree, promoted the event as “the first time in the history of the world that a Torah was written especially for the Jews of Eugene.” Students said they’d show up, a willingness Peterson attributes to the Torah’s existence as a living document. “You wouldn’t see a whole bunch of English dancing in the street for a reprinting of Shakespeare’s folios,” he said, “but the Torah is active, it’s almost as if it has a soul.”

Just ten days prior, at Indiana University in Bloomfield, cars slowed on Seventh Avenue to honk in salute of the Torah procession led by IU’s Chabad House Jewish Student Center. “Everyone was able to see Jews in a different light,” said doctoral student Arielle Gereboff, who’s pursuing a PhD. in French Linguistics. As the merriment wove it’s way from the Student Union to the Chabad House with a police car escort, the crowd of a hundred became part of trend as more and more Torahs are dedicated to campus-based Chabad centers.

Until the new Torahs arrive, Chabad centers, like University of Oregon in Eugene, borrowed scrolls from area synagogues or used a scroll that floated from center to center based on need. However, for a Torah to be considered fit for use, it must be identical – down to the letter – to every other Torah, but rabbis and students marching in the processions say there’s nothing like a Torah of their own. “It is a sign that not only are we growing in numbers and programs but that we are growing with internal strength,” said Chabad of Indian University’s Rabbi Yehoshua Chincholker, “and a sign that we are for real.”

On the Sunday night after USC welcomed its own Torah, Kaley Zeitouni’s friends tossed around the idea of attending the Monday morning prayer services at Chabad. She recalled thinking, “That’s weird, Mondays – usually guys do that,” said Zeitouni, a sophomore majoring in Health Promotion and Disease Prevention. Then she remembered that the new Torah, the USC Torah, was going to be read from. “It definitely increases the personal connection,” she said.

A new Torah draws the Jewish community on campus together. Rabbi Asi Spiegel of Chabad at University of Oregon went so far as to name his scroll a “CommUnity Torah.” During the procession at Indiana U, the Torah’s patron, Kevin McKassen handed the Torah to IU student Josh Lorch. The moment “physically represented the Torah’s transmission from generation to generation,” said Executive Vice President of Chabad of Indiana Rabbi Avrohom Grossbaum.

A more transcendent degree of unity was actually the reason, according to Chabad at USC’s Rabbi Dov Wagner, behind the choice to include the marching band at the procession. “At a major secular university, you can have a strong Jewish community and possess the Torah in that environment,” he said. “This isn’t something separate from who you are, it is part and parcel of who you are.” So impassioned were the students that they “danced and danced in 100 degree heat,” said Chabad at USC’s Runya Wagner.

At established synagogues with supporters not subsisting on financial aid disbursements and dorm meal plans, a new Torah is an opportunity to do some major fundraising. The capstone event generally involves a scribe filling in the last letters with a quill and inkbottle in view. University of Oregon’s Chabad, which doubles as Eugene’s community Chabad, did just that with the help of the Tenenbaum family. Secondhand Torahs are more compatible with campus Chabad budgets. At IU, a Torah previously used at the Kotel was donated. USC’s Torah arrived through a fund established by the late Sandra Brand, a Holocaust survivor. The Trojan Torah was once read in a Massachusetts congregation, but it reminds Wagner of a Torah he and USC students buried in New Orleans during a humanitarian mission after Katrina. After burying a Torah last year, bringing a Torah that had fallen into disrepair back into constant use “completed the circle” he said. “The fact we keep the letters of the Torah alive, and young people are celebrating opportunity to have it, is very powerful.”