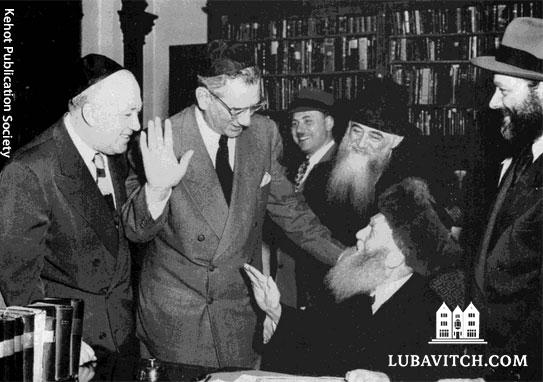 The sixth Lubavitcher Rebbe, Rabbi Yosef Yitzchok Schneersohn is sworn in as an American citizen.

This Wednesday, the tenth day of the Hebrew month of Shevat, marks the seventy-first anniversary of the Lubavitcher Rebbe, Rabbi Menachem Mendel Schneerson, of righteous memory, assuming the mantle of Chabad leadership. The event, on the occasion of the first yahrtzeit of his predecessor and father-in-law, the sixth Lubavitcher Rebbe, Rabbi Yosef Yitzchak Schneersohn, has since been celebrated as a day of reflection on the legacies of these two great Jewish leaders.

Born June 21, 1880 in the town of Lubavitch, Yosef Yitzchak was inducted by his father, the Fifth Lubavitcher Rebbe, Rabbi Sholom Dovber Schneersohn, into communal work on behalf of Russian Jewry at the tender age of 15.

Appointed as the head of the newly founded network of Lubavitch Yeshivot, Rabbi Yosef Yitzchak laid the educational groundwork for a new generation of students that would be tested under the oppressive regime of the Soviet government.

After the passing of his father in 1920, Rabbi Yosef Yitzchak took on the leadership of the Chabad-Lubavitch movement. Despite increasing harassment by the KGB, he continued his work strengthening Jewish communal and cultural life.

In 1927, Rabbi Yosef Yitzchak was arrested and imprisoned in the Spalerno prison complex in Leningrad. Accused of counter-revolutionary activities, he was initially sentenced to death. A world-wide campaign, aided by the International Red Cross, managed to convince the Soviets to commute his sentence to a lighter one. He was exiled to Kostroma, a small city in the Ural Mountains, deep in the Russian interior.

Further pressure from abroad led to Rabbi Yosef Yitzchak’s almost immediate release. He then moved Chabad’s headquarters to Riga, Latvia and spent much time traveling abroad. On trips to Israel and the United States in 1934, he met with his followers and various influential figures, including US President Herbert Hoover, in the hope of raising awareness of the plight of Soviet Jewry.

In 1934, Rabbi Yosef Yitzchak moved to Warsaw, Poland. He found life in the Polish capital city stressful. Plagued by poor health as a result of his treatment in Soviet prison, he moved his place of residence to the nearby town of Otwock. Despite chronic health issues, Rabbi Yosef Yitzchak continued to expand Tomchei Temimim, the network of schools established by his father. Among those attending the main yeshivah in Otwock, were a small number of American yeshivah students. Rabbi Mordechai Altein was one of them.

A few years ago, lubavitch.com had the privilege to sit down with Rabbi Altein to discuss his memories of the sixth Rebbe and the transition of Chabad leadership to the Rebbe.

Tell us about your childhood.

I was born in Manhattan’s Lower East Side in the year 1919. At that time, the Lower East Side was teeming with Jews — people spoke Yiddish in the streets, there were synagogues and shtieblach [small houses of worship] on almost every corner.

But life as a Jew was far from easy. There were no unions to advocate for immigrant rights. Unfamiliar with the language of the land, many were forced into unfavorable jobs, working like slaves. There was no electricity in the tenement houses. My mother heated water in a big pot on the stove to bathe us.

Being an observant Jew was even harder. If you succeeded in securing a job, the terms included working the entire week. If you didn’t work on Saturday, then it was common knowledge that come Monday, you would no longer be employed.

My father was a peddler, buying and selling various odds and ends. By working as his own employer, he was able to keep the Shabbos.

When I was seven years old, I was sent to school in Yeshivas Chaim Berlin. My father would walk me to the [cable car], which I would take by myself to the Yeshivah. At the time, Chaim Berlin was one of the only Yeshivas in Brooklyn. The school was filled with children, perhaps 700 or 800, all from religious families. Everyone else sent their children to public schools. The yeshiva was very strict; if we came even a minute after 9:00, they’d lock the doors. Learning lasted the entire day. Thank G-d, though, I did well and progressed in my studies.

When did you first encounter the Chabad-Lubavitch movement?

When I graduated from Chaim Berlin, I enrolled in Yeshivah Torah Vodaath in Williamsburg, Brooklyn for high school. There we were already becoming aware of the greater Torah world and yeshivot in Eastern Europe. When Rabbi Elchonon Wasserman [the head of the yeshivah in Baranovitch, Poland, later murdered by the Germans during their liquidation of Lithuanian Jewry in 1941] visited America in 1939, the dean of the yeshivah took us to greet him at the docks.

As we learned more, we came into contact with various Jewish movements and schools of thought. Rabbi Yisrael Jacobson, who would later become my father-in-law, had been sent by the Rebbe [Rabbi Yosef Yitzchak Schneersohn] in the 1920s to strengthen Chabad activities in America. Though he lived in the neighborhood of Brownsville, he used to give classes in the Tanya [the seminal work of Chabad Chasidic philosophy authored by Rabbi Schneur Zalman of Liadi in 1797] and various other Chasidic texts for the yeshivah students.

It opened our eyes and was like a breath of fresh air for us. One can’t imagine how difficult it was to remain a religious Jew at the time. Everyone was trying to assimilate so as to gain entry into American culture. Very few sent their children to yeshivot — perhaps one out of every hundred children went to learn in a Jewish school. It was very hard to fight the tide, to have the courage to stand out and be different. Most of my friends from school ended up attending secular high schools and universities. Thank G-d, though, what we learned gave us the courage to keep fighting, and remain religious. Without Chasidut, we wouldn’t have made it.

When did you first meet the sixth Rebbe?

Rabbi Jacobson encouraged us to correspond with the Rebbe in Poland, thereby establishing a relationship. The Rebbe suggested that we come to Poland to learn in the main Yeshivah in Otwock. Keep in mind that this was the summer of 1939, the eve of Second World War. But the Rebbe told us to come, so we went. When we first arrived, I was allowed to pray in the Rebbe’s minyan that Shabbat. The regular yeshivah students had their own prayer services in the yeshivah, so joining the Rebbe was a very special honor.

When we first saw him, we were completely overwhelmed. We felt like we were meeting someone from a completely higher world. Things weren’t going well internationally. The following week, the Rebbe delivered a discourse that addressed the need for repentance, prayer, and acts of charity to remove any negative decrees. We were very frightened.

During our third week in Poland, Germany surprised the world by launching a sudden attack on Poland’s borders. The Second World War had begun. We spoke with the Rebbe, and he advised us to flee to the American Consulate in Warsaw, and from there head on to Riga, Latvia, where we would wait for later instructions from him. I called the consulate, but I was told not to come to the capital as the Germans would bomb the city. But the Rebbe had instructed us to go to Warsaw, so we went.

When we arrived at the consulate, they wouldn’t admit us, as they had instructed us not to come. So we spent the night wandering the city. It was a harrowing experience.  The Poles had declared martial law, and would shoot anyone out after curfew. No one would give us shelter without signing papers with the landlord, and as it was Shabbat [when writing is forbidden], we wouldn’t sign. Ultimately someone did take us, and on Sunday we boarded the train to Latvia.

Everything was in chaos. The countryside was filled with people trying to flee the advancing German troops, and our train was strafed by German fighter planes. Thank G-d we made it to Riga, where we waited for instructions from the Rebbe, but communication with Poland had been cut off, and ultimately we left for America. We later found out that when the Rebbe reached Riga himself a few months later during his escape to America, he asked about our whereabouts. He was told that, unable to contact him, we had left for America. The Rebbe was quite surprised that we had done so and remarked, “If they had made an effort, they would have found a way [to contact me.] You have no idea how much it would have comforted me as the German bombs rained down on us in Warsaw if I had known that they were safe.”

What was your experience when the sixth Rebbe passed away?

After the Rebbe arrived safely in America with his family [aside from his youngest daughter Shaina and her husband, Mendel Horenstein who were killed in Treblinka], I became involved with the Achei Temimim yeshivah in the Bronx. The day before, the Rebbe had sent me a letter, [so we were very much shocked] when he passed away Shabbat morning. When I found out, I immediately traveled to Brooklyn. Over Shabbat, the Rebbe [Rabbi Menachem Mendel Schneerson, of blessed memory, the sixth Rebbe’s son-in-law,] had been very careful not to show outward signs of mourning so as not to dishonor the peace of Shabbat. Afterward, however, he was very busy arranging the burial plans and involved himself in every detail.

When did you first take notice of the Rebbe as the new leader of the movement?

Chasidim turned to the Rebbe immediately as a leader, but he demurred. In general, he was a very modest man, and at the time, he didn’t want to take over the movement. He would help people with the questions they asked him, but would tell them, “What do you need to come to me for? You can go to the Rebbe[‘s burial site] and pray for help there.” The Chasidim continued to press him to take over, and little by little, the Rebbe began to take on various roles of Rebbe.

When the first anniversary of the sixth Rebbe’s passing came around, the Rebbe went with all of the Chasidim to the Rebbe’s burial site at the Old Montefiore Cemetery in Queens. That evening he sat down to farbreng [a traditional Chasidic gathering] with the Chasidim, and he delivered the discourse Basi L’gani [literally ‘I have come to my garden’ (Song of Songs 5:1), an explanation of a discourse written by the sixth Rebbe that was slated to be learned on the Shabbat he passed away.] This marked his first formal act as Rebbe.  Despite this modest beginning, he had begun to lay out the very foundation of Chabad today, and his role as leader. He stressed the need to love every Jew, regardless of his or her physical or spiritual state to the point of self-sacrifice.