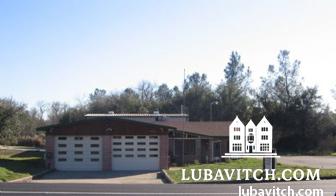 (lubavitch.com) California may be experiencing an economic disaster of seismic proportions, but for the Jewish community of suburban Sacramento, the vibrations are only positive.

Rabbi Yossi and Mrs. Malkie Korik formed Chabad of Roseville in 2005. Operating out of their home and rented facilities, the two have developed a vibrant Jewish community in Placer County. Now, though, Chabad’s many educational offerings and social activities will have a new home: a former South Placer Fire District outpost.

Korik closed on the property four weeks ago. He has already commissioned architects and designers to help revive this shuttered fire station and transform it into a glowing Jewish center. At one story, the fire station does not include the fabled fireman’s pole, and Korik’s renovations will ensure that the building loses its entire fireman look.

Local businessman Genndy Shapiro has sponsored half a million dollars towards the center’s construction bills. Community members have likewise pitched in, despite Korik’s concerns that economic woes would trump the project, towards the campaign’s goal of 1.2 million dollars.

Within the year, Roseville’s newest center will be ablaze with Jewish life.