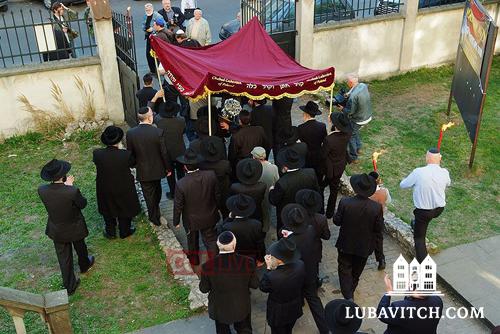 (lubavitch.com) A Torah scroll was completed and dedicated Monday at the historic Rema Synagogue in Krakow, Poland. In recent years, the ancient synagogue dating back to 1553, did not have its own Torah. That changed at the behest of a descendant of Rabbi Moshe Isserles, for whom the famed shul is named.

Rabbi Yosef Yitzchak Raichik, of blessed memory, noticed that the congregation did not have their own Torah scroll on a visit several years ago. He immediately commissioned one to be written. Raichik, who passed away last September, was the director of Chabad’s Children of Chernobyl and a tireless supporter of Jewish causes.

Monday’s event was held in his memory. A grateful crowd of hundreds of local Polish Jews and supporters from abroad gathered to celebrate his life and latest contribution. Participants wound their way through the streets of the ancient Jewish quarter, singing and dancing as they welcomed the Torah scroll to its new home.