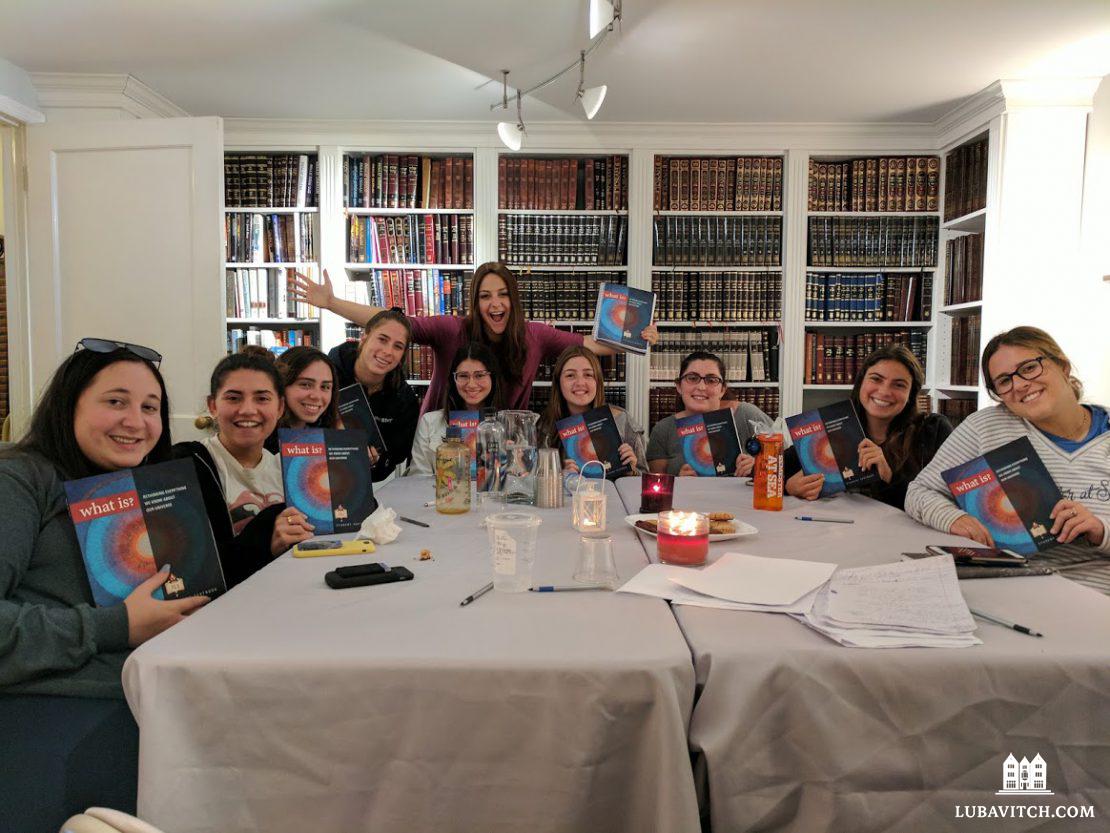 Jewish U’s “What Is?” course explores the very existence of nature and reality. Miri Gourarie (middle), co-director of Chabad of Undergrads at Penn State, teaches the course to a group of students.

The beginning of the school year is upon us, and there’s exciting news for all Jewish college students.

Chabad on Campus International, a world leader in Jewish campus education, has been feverishly working on a new, innovative learning program called JewishU that is redefining what it means for college students to study Torah. Until now, elements of the program have only been implemented in pilot settings or under the restrictive conditions of COVID, and this will be the first year that it will be implemented in its full scope.

“History has taught us that the key to Jewish continuity is Jewish education,” explained Rabbi Yossy Gordon, the CEO of Chabad on Campus International, “and JewishU will be a transformative tool for the deep impact of Torah education.”

Suzi Delay, a molecular biology student at the University of Kansas, didn’t have a clue what it meant to “study Torah” when she began taking JewishU courses.” “In my head, it’s like you open the Torah and read!” she said, laughing at herself. Now, after taking nearly a dozen JewishU classes, she’s toying with the idea of writing a ten-page Torah thesis, which will earn her a JewishU certificate in Jewish studies. “JewishU showed me how to have a relationship with G-d and how to study Torah… and I’m constantly interested in what else I can learn,” she said.

Granted, Chabad on Campus has been in the business of Jewish education for decades. But JewishU seeks to re-imagine Jewish education by providing a program that complements and mirrors a student’s secular college education. Parallels include course credits, meticulously designed classes, a comprehensive course catalog, and structured course schedules.

“If we’re going to have Jewish students with a strong Jewish identity, they’re going to need to have a solid education on par with their higher education,” said Rabbi Shlomie Chein, the director of JewishU.

The JewishU catalog currently contains over twenty different courses, spanning twelve fields of Jewish study, and even more are being developed by a seasoned team of curriculum writers at the Rohr Jewish Learning Institute. Each course is four weeks long, and students are awarded with JewishU credits which can be traded for a variety of awards.

Forty-five college campuses have already been using the program, and this June, Chabad on Campus onboarded an additional twenty-five campus Rabbis and Rebbetzins, bringing their roster of locations to a total of seventy campuses.

From times gone by, academies of Jewish learning have always been an integral part of Jewish tradition and continuity, and JewishU is no exception. Beginning with the academy of Shem and Ever, the alma mater of all three patriarchs, to the famous Torah academies of Hillel and Shamai, JewishU is the latest addition to this venerable line-up and promises to be a powerful force of Jewish pride and knowledge.

Related Articles
View All
Campus
Largest-Ever Pegisha Shabbaton Brings University Students to Crown Heights
Over 1,200 students, almost 200 Chabad emissaries, came for this year’s Pegisha
Campus
Confronting Cancel Culture on Campus
As political discourse on campus approaches the point of no return, Jewish students and Chabad reps are mining their own argumentative tradition for guidance, inspiration,…
Campus
Ep. 31: Merging Torah And Science: Lessons From The Life Of Dr. Binyomin Abrams
In Episode 31 of Lamplighters: Stories From Chabad Emissaries On The Jewish Frontier, reporter/producer Gary Waleik presents the story of Professor Binyomin Abrams, whose growth…
Campus
Ep. 30: World’s First Chabad on Campus Still Going Strong
The 30th episode in its series about the personal struggles and achievements of Chabad representatives
Get Inspiration to your inbox!
Newsletter
Join our weekly newsletter for inspiration and updates
Donate
Find Your Local Chabad Center
Subscribe
|
Log In
Chabad
About Chabad-Lubavitch
About Chabad Lubavitch
The Rebbe
Headquarters
Magazine
Magazine
News
News & Updates
In The Media
Impact
Social and Humanitarian
Social and Humanitarian
Education
Education
Community
Community