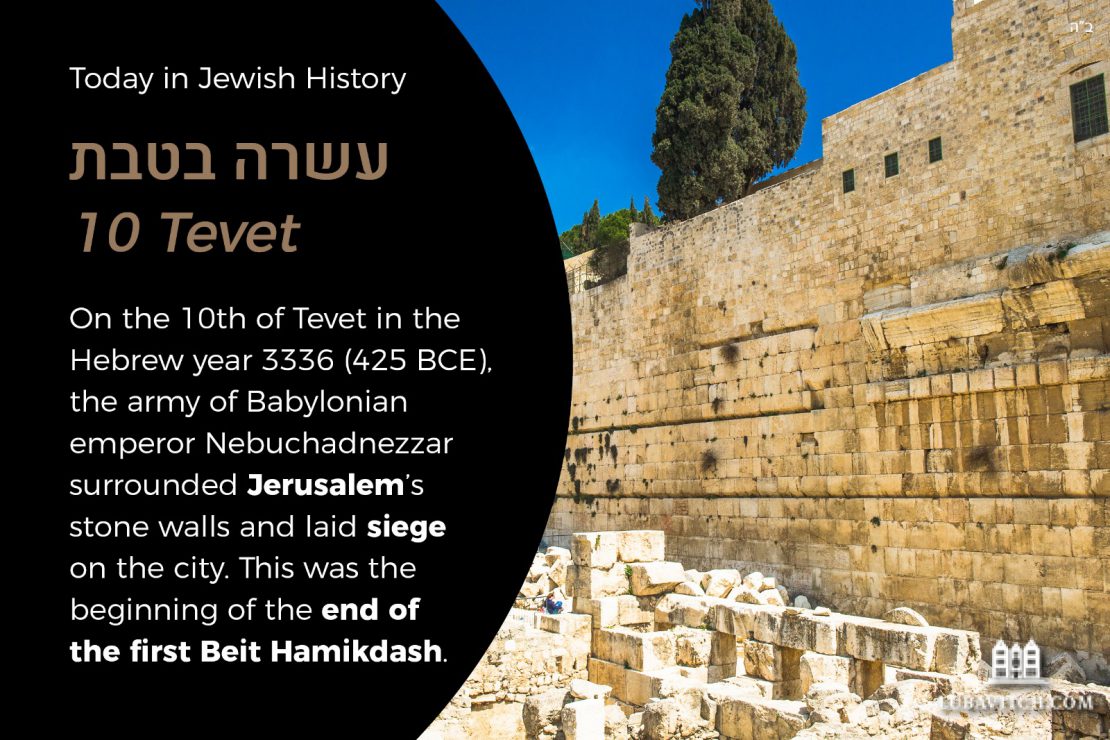 On the 10th of Tevet in the Hebrew year 3336 (425 BCE), the army of Babylonian emperor Nebuchadnezzar surrounded Jerusalem’s stone walls and laid siege on the city. This was the beginning of the end of the first Beit Hamikdash; on the 17th of Tammuz, 3338, the city walls were breached, and three weeks later, on 9 Av of that year, the Temple was destroyed and the Jews were sent into exile.

The 10th of Tevet is observed as a day of fasting and mourning; the fast begins Tuesday morning and lasts until nightfall.

We wish you an easy fast and may we see the third temple rebuilt in our times.

Related Articles
View All
History
Today in Jewish History: 10 (Yud) Shevat
Yud Shvat is the anniversary of the passing of Rabbi Yosef Yitzchak Schneersohn, sixth Rebbe of Lubavitch, of blessed memory, (5710/1950). On the same day,…
History
Today in Jewish History: 24 Tevet, Passing of Rabbi Schneur Zalman of Liadi, founder of Chabad Lubavitch
The end of 1812 found Rabbi Schneur Zalman of Liadi, also known as the Alter Rebbe, journeying through small towns and villages, distancing himself and…
History
Today In Jewish History: 20 Teves
Today in Jewish History: 20 Teves, Passing Of Maimonides The “Rambam,” acronym for Rabbi Moshe ben (son of) Maimon, passed away today, the 20th of…
History
Today in Jewish History: The Victory in Chabad Library Trial
On the 5th of Tevet (Hei Teves) in 1987, the extensive library of the sixth Rebbe, Rabbi Yosef Yitzchak Schneerson, was declared as belonging to…
Get Inspiration to your inbox!
Newsletter
Join our weekly newsletter for inspiration and updates
Donate
Find Your Local Chabad Center
Subscribe
|
Log In
Chabad
About Chabad-Lubavitch
About Chabad Lubavitch
The Rebbe
Headquarters
Magazine
Magazine
News
News & Updates
In The Media
Impact
Social and Humanitarian
Social and Humanitarian
Education
Education
Community
Community