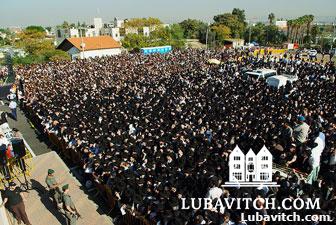 Photos by I. Bardugo for lubavitch.com

(Lubavitch.com) A huge crowd of about ten-thousand people gathered in Kfar Chabad, Israel, Tuesday afternoon to remember the lives of Gavriel and Rivkah Holtzberg, the young Lubavitch emissaries who were murdered in their Chabad center during the large-scale terrorist attack in Mumbai, India, last week.

Blue skies and sunshine attended the funeral ceremony, along with 250 fellow emissaries from around Israel, another 100 from around the world, and a number of Israeli rabbinical and political dignitaries including the Sephardic and Ashkenazic chief rabbis, President Shimon Peres, Minister of Defense Ehud Barak, and former Prime Minister Binyamin Netanyahu.

“There is no doubt,” said Kfar Chabad Rabbi Mordechai Ashkenazi, that Gavriel and Rivkah will rise to the heavenly Throne of Glory, and in the presence of the Rebbe, will beseech G-d for protection and strength for all the shluchim, to continue their holy work.”

Rabbi and Mrs. Holtzberg had personally grown the Mumbai Chabad center into a thriving hub of hospitality and spirituality, having moved there just several years ago. “They never said no to anyone,” said Rabbi Moshe Kotlarsky, Vice Chairman of the Lubavitch educational arm. “There was nothing they couldn’t do. They were such special people. From the moment I met them, I saw the truth and the purity of their desire to spread the Torah to every Jew.” Rabbi Kotlarsky announced that the center will be rebuilt and carry the name of the "Gavriel and Rivkah Holtzberg Chabad Center."

Family members and shluchim were seated in special sections in the parking lot of Kfar Chabad’s main synagogue, an exact replica of the “770” Chabad-Lubavitch Headquarters in Brooklyn, New York. Other mourners–throngs of men and women, young schoolgirls, secular Israelis, children in strollers, black hats and crocheted kippahs, Chasidic teenagers, journalists–crowded into the building’s yards and up the street.

Rivka Holtzberg’s uncle, Rabbi Yitzchak Dovid Grossman, compared the couple’s work to that of the Biblical patriarch Abraham. “Like him, you built a hospitality center,” he said, “not for yourselves, but so that any Jew could enter and find a warm place. How many times have I heard Israelis say they went to India to find themselves, and they found a mother and father–Gabi and Rivki.” He said that when asked by the grieving family where they could find the Holtzbergs’ personal effects, they were told that “they have no private property. Nothing was personal to them. Everything they owned became communal. It was all for the community.”

Chief Rabbi Yona Metzger, and former Chief Rabbi Yisrael Meir Lau, each took a few moments to acknowledge the heroic actions of the nanny Sandra, who whisked little Moshe Holtzberg to safety, comparing it to the saving of Moses by Bitya, daughter of Pharaoh.

“You saved for us the future of this wonderful family,” Rabbi Metzger said, addressing the nanny. Added Rabbi Lau: “Her efforts to save the child will be remembered for generations.”

Calling for the eradication of terror, President Shimon Peres, focused on little Moshe. "The entire Jewish people, indeed the entire world, is crying along with little Moshe. All are asking the same question as Moshe: 'why were my mother and father killed'? The world dare not rest until this question is answered."

With the now lifeless bodies of Gavriel and Rivkah at their side, family members and dignitaries commemorated the Holtzbergs’ lives, as members of the audience wept. There was little talk of revenge for the murders, and a general sense of helplessness in creating meaning of the brutal killings; instead, the speakers focused almost exclusively on the need for Jews everywhere to glean inspiration from the Holtzbergs’ good works, and to continue their mission in their place.

Secretary to the Rebbe, and Chairman of the Lubavitch educational and social-services arms, Rabbi Yehuda Krinsky, recalled when, some 52 years ago, he had been one of 10 students sent by the Rebbe to visit Kfar Chabad to help strengthen the community after a terrorist raid in the fledgling village killed 5 students and a teacher. The Rebbe encouraged the villagers to remain steadfast and continue to grow and build the village and its institutions.

“This will be your true consolation,” the Rebbe stated then. "This message is our message today," said Rabbi Krinsky. "Our voices are silent in face of this devastation, but our accelerated actions will bring comfort to this extraordinary, beautiful family." He added that since Friday, thousands of women have taken upon themselves to light Shabbat candles regularly in honor of Rivkah Holtzberg’s memory, and several newborn children worldwide have been named Rivkah or Gavriel.

Rabbi Abraham Shemtov, representing Agudas Chasidei Chabad, read a message from President George W. Bush, in which the President expressed appreciation to Chabad for its work, hope of comfort to the mourners, and an acknowledgment that Gavriel and Rivkah "represented the best of the human spirit."

Founded in 1949 by the sixth Lubavitch Rebbe, Rabbi Yosef Yitzchak Schneersohn, Kfar Chabad is a Lubavitch village about 8 kilometers southeast of Tel Aviv, with a population of about 5,000.

For shluchim-emissaries in particular, the deaths of the Holtzbergs is a personal tragedy; shluchim from around the world, especially those in their 20’s, as Gavriel and Rivkah maintained close realationships with their colleagues despite geogrpahic distance. Through use of an intra-shluchim network, Gavriel and Rivkah were in daily contact with shluchim around the world.

One shliach told Lubavitch.com that “none of the shluchim have been sleeping. It cut us straight to the heart. But with one voice they are saying they will continue their work. This has unified us in a way that the love will spread around the world. The care we feel will affect the entire world.”

“We all feel like family,” Chana Kornzweig, of Kiryat Malachi, Israel, told Lubavitch.com. “All the shluchim feel like family. Without question, we, like all the shluchim around the world, will gather in our Chabad Houses and campagin for an increase in mitzvot, establish more Torah classes etc., in the merit of Gabi and Rivki.”

Rabbi Krinsky told Lubavitch.com that several families have volunteered to become the new shluchim in Mumbai, and that the decision of who will fill the Holtzbergs’ shoes will be made by Rabbi Yosef Chaim Cantor, the regional emissary in Thailand, in consultation with Lubavitch Headquarters in New York.

The funeral proceedings, which according to Sunday’s press reports were to have started at 10:30, began after 1 pm, partly due to extensive street closings in the Tel Aviv area. Visitors to the funeral were carefully vetted by security personnel.

The funeral proceeded to Jerusalem, passing Shikun Chabad on the way to the Mount of Olives, were they we interred.