The Rebbe in 1964: On Jewish Education, Community, Responsibilty 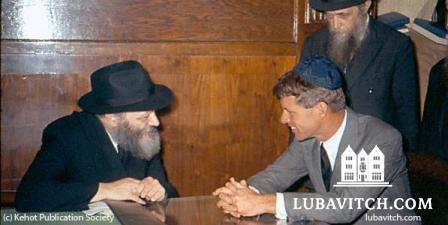 11 Nissan, corresponding this year to Wednesday, March 24, 2021, marks the birth date of the Lubavitcher Rebbe, Rabbi Menachem M. Schneerson, who was born in 1902. Jewish communities worldwide will be honoring the day with activities that celebrate the Rebbe’s legacy of Jewish education, Jewish pride and Jewish unity.

27 years after the Rebbe’s passing, his extraordinary life continues to inspire writers and academics to explore his life and the dramatic movement he led to revive Jewish life.

In 1964, Samuel Kaplan, the publisher and editor of the Jewish Western Bulletin of Vancouver, Canada, wrote an editorial following a private audience he had with the Lubavitcher Rebbe. The following, from the archives of Chabad-Lubavitch Headquarters, is a draft dated November 18 1964, that the editor submitted to the Rebbe’s secretariat for perusal prior to publication.

The World of Lubavitch

The streamlined jet-age conveyance had flown the writer to New York; and vintage limousine had completed the journey to Brooklyn. Yet upon reaching the entrance of the building which houses the office of Rabbi Menachem Mendel Schneerson, it seemed that occurrences of another era were happening again.

There were at least a few distressing similarities between the anti-Jewish violence of peasants in the villages of Czarist Russia and contemporary pogrom-like activities of hoodlums in the largest U.S. metropolis.

It is possible that a visitor seeking an audience with one of the earlier Lubavitcher Rabbis in Russia or Poland, and knowing that the police would not lift a hand to assist a Jewish victim, would have felt a sense of apprehension. Similarly in America today, a visitor to the Lubavitch area knows that even policemen of the Brooklyn species have grudgingly admitted their inability to cope with the violent situations that exist on many of the streets and alleyways of the crowded Bedford-Stuyvesant sector of the city.

However, as the taxi sped that recent night to the Crown Heights section of Brooklyn, the recollection that a group of persons known as the “Maccabees” had helped restore law and order to the area, afforded a feeling of confidence and pride. The young Chassidic Jews, led by their commander, Rabbi Samuel Schrage and aided by Episcopalians and even Negroes, were at that very moment patrolling the area with two-way radio transmitters, alerting police authorities of suspicious movements, would-be burglars, rapists and knifers, before violence occurred.

The “Macabee” patrols represent, in fact, a 20th century self-defence movement that is not unrelated to the many Jewish survival programs undertaken by Lubavitoher leaders of bygone days and in distant lands. For facing desperate situations as they fought to survive against poverty and hostility was the common inheritance of predecessors of the dynasty that was founded by Rabbi Israel Baal Shem Tov (1698-1760) and formalized by Rabbi Schneur Zalman (1745-1812). It was in honor of the latter that each succeeding Lubavitcher Rabbi has added “Schneerson” to his name.

The immediate predecessor of the present Lubavitcher Rabbi, the late Rabbi Joseph Isaac Schneerson, was at the forefront in the fight against the anti-religious organization known as the “Yevsektzia” and the secret “Tchekau. Fearless in his struggle against the forces of anti-Semitism, he was arrested no less than four times by the Czar’s police in Moscow and St. Petersburg. When he landed in New York in 1940, he had just lived through the German bombardment of Warsaw and previously had been liberated from solitary confinement and a Communist-imposed death sentence in a Leningrad prison, the liberation on being due in part to the intervention of the late President Hoover. When he set foot for the first time on U.S. soil, the Lubavitcher Rabbi was granted the freedom of the City of New York and later was received at the White House by President Hoover.

Now, as we approached the Eastern Parkway building in Brooklyn, the opportunity would soon arrive to learn at first hand about the present Lubavitcher Rabbi’s role as head of a Chassidic movement whose followers are numbered in the hundreds of thousands and whose institutions of education and worship are to be found in the far corners of the earth.

The interview had been set for eleven o’clock on Thursday evening, comparatively an early hour since Rabbi Menachem Mendel Schneerson customarily receives most of his visitors during hours well past midnight, thrice weekly. The distinguished Torah scholar’s work day lasts 15 or 16 hours.

The moment of arrival at Lubavitcher headquarters contrasted with the violent night mood of the city and cut through the cold darkness. For waiting at the curb to extend their hands in warm welcome with the traditional greeting of “Peace” were several young bearded Chassidim, some with traditional side curls, wide-brimmed hats and flowing black coats. First to say “Shalom Aleichem” was Rabbi Label Groner, the Rabbi’s secretary to whom the writer had spoken on the telephone. Following customary introductions, we proceeded to the office of Rabbi Yehuda Krinsky, a youthful disciple who, in addition to continuing his studies and other duties, is in charge of public relations as well as preparing publicity material for news media.

As we awaited our meeting with the “Rebbe”, as he is affectionately called by his disciples, we learned from Rabbi Krinsky that many distinguished persons are regularly received by the Rebbec. Only a few days before, the former U.S. Attorney-General, Robert Kennedy, had visited him, and Senator Kenneth Keating had indicated that he would be doing likewise.

Rabbi Krinsky hastened to add that the Rebbe always took a neutral position not only in general political matters but also concerning political issues within the Jewish community, in order to enable persons of every persuasion to approach him for guidance and seek personal acquaintance with him. It permits him, as well, to seek the widest possible support for his vast program of Jewish education including numerous schools and Yeshivot in many parts of the world.

And as if to underline the movement’s magnitude, Rabbi Krinsky’s phone rang constantly, many of the calls originating in distant cities and far-off countries. Because of time zone differences, telephones at Lubavitcher headquarters are manned twenty-four hours a day.

Finally Rabbi Krinsky placed the phone back on the receiver and in a moment, the writer was ushered into the study of the world leader of the Lubavitcher movement.

Rabbi Schneerson was seated at his desk, a man in his early sixties, eyes bright and warm, bespeaking a gentle soul and a wisdom nurtured by a tradition ancient and rich. Graciously he beckoned to a nearby chair and listened with wrapt attention as we told him about ourselves and the Jewish community of Vancouver.

We conversed mainly in Yiddish but he evinced an excellent command of the English tongue.

The Rabbi consented to answer some formal questions which we had prepared.

The first, related to the Catholic Ecumenical Council, asked for the Rabbi’s opinion on the effect which might be expected should the Council pass the original “schema” concerning the Jews.

The Rabbi asked for a clarification as to which of the original” schema we referred, since he stated there had been a total of three. The first, he pointed out, while it had been the basis for much comment and speculation, had never been made fully public.

Then he addressed himself to the main issue. In his view: if the Council passes a resolution that will help to remove the basis of anti-Semitism, then it is most desirable; the elimination of anti-Semitism is the urgent concern of all Jews and the passing of a schema might help to bring this about. “It therefore has a practical application to Jews,” he declared. “If Jews are being persecuted all of us must be concerned and we ought to voice our urgent concern in this matter.”

Rabbi Schneerson emphasized that he was not looking at it from the theological aspect but rather from the general and historic. He noted as an example that if during the terrible age of the Crusades the means could have been found to get the Christians to alter the dogma which was the basis of a violent anti-Semitism that cost the lives of 400,000 Jews, some or all of those lives might have been saved. As his final comment, the Rabbi stressed the need for guarded optimism in the matter, pointing out that even the latest schema may be tabled at this session of the Council.

Our next question concerned itself with the future of the Jewish community of North America. Aware that the first Lubavitcher Rabbi to come to this continent had adopted as his goal the objective of establishing a Torah centre to take the place of

the devastated communities of Europe, and knowing that the present Rabbi had also expended the greatest efforts on behalf of “Torah-true” Judaism, we asked him to predict the state of Jewish communal life 50 years from now, particularly with regard to balances of observant and non-observant Jews and the state of Jewish education.

The Rabbi replied that it was not necessary to attempt to forecast as far ahead as 50 years. He said it was possible to predict with certainty a general movement towards the Right in Judaism: since the trend during the past decade had been for

Conservative Judaism to become more Orthodox, and Reform more Conservative, there was every likelihood of this trend continuing for the next decade. He cited the growth of Jewish Day schools as one manifestation of this trend, wherein Conservative congregations who were formerly opposed to such schools are now sponsoring their own, and the Reform, who were even less inclined to think about Day schools, are now starting to talk about them.

Incidentally, we had learned earlier that the Lubavitcher movement operates the Merkos L’Inyonei Chinuch ( Central Organization for Jewish Education), a vast network of Day schools and yeshivot with an enrollment in the tens of thousands, located in lands as far distant as Australia, Brazil and North Africa. This does not include its vocational schools, youth clubs and summer camps which provide informal Jewish education to countless others.

Since the interview by this time had stretched considerably longer than the customary quarter-hour duration, we indicated that our questions had ended. But before we had begun to express our appreciation, the Rabbi stated that he, too, had a question to ask. As it turned out, his question was directed not to the writer alone but rather to all Vancouver Jewry.

Firstly, he stressed the great responsibility History has rested on the shoulders of every living Jewish man, woman and child as a result of the death of six millions of our people during the Second World War. Had tragedy not claimed them, he said, would they not now be making a creative contribution to our people and to all mankind? Is it not, therefore, the sacred duty of every surviving Jew to do more than would normally have been expected of him, to compensate for such a loss?

Regrettably, the Rabbi stated, there are assimilationist Jews who place no value in Judaism and who deny their children a Jewish education. These people, by hastening their own Jewish demise, are fulfilling the plan for the “Final Solution” begun by the Nazis.

More than a question, it was in our opinion, a challenge to every Jewish person in our community.

And the answer, he said, is for Jews to rededicate themselves to furthering Jewish education, to give their lives new meaning by turning to the spiritual substance that is the inheritance of every Jew and as such has always been their right: Torah, the Shulchan Aruch (Code of Laws) and observances of the Mitzvot (Commandments).

As we emerged from the audience we were surrounded by some dozen young disciples excitedly asking, “Vos hot der Rebbe gezokt?” -What did the Rabbi say?

Within the hour, the young Chassidim held open the doors of the building and guarded their Rebbe as he entered his car and was driven away into the night.