The Maharal Institute Opens in Prague 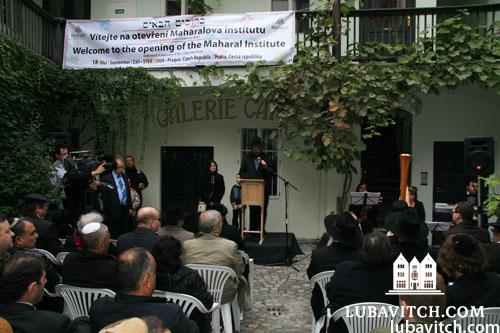 (lubavitch.com) Chabad-Lubavitch of Prague launched the Maharal Institute last week, dedicated to the legacy of Rabbi Yehuda Loew, the Maharal of Prague.

The new venture, which will be a center of Torah learning for the community, is in the same ancient quarter where this 16th-century giant spent much of his life. Rabbi Manis Barash, the local Chabad representative and the institute’s founder, believes that, among other positive outcomes, the center will right a common misconception.

While the Maharal is universally known for creating the remarkable golem with clay and G-d’s name, there is a lot more to him, says Barash. “Everyone here in Prague, Jew and non-Jew, knows of the Maharal,” he says. “But when they think of him, they only know about the golem, not his scholarly or philosophical works. It is almost an injustice that all that is left here is a museum.”

The Maharal was born in 1525. For many years he served as the chief Rabbi of Prague, the heart of central European Jewish life. Rabbi Loew was revered by Jews and gentiles, the former for his leadership and scholarliness; the latter for his scientific knowledge and political acumen. The emperor himself, Rudolph II, made clandestine visits to the Rabbi’s home seeking advice. Many of the Maharal’s insights were recorded in his 22 books.

Those 22 volumes, and other Torah sources, will be studied at length at the new institute. Ten rabbinical students from Israel and the United States are to spend the year in Prague learning in the new yeshiva. Locals are keen to study with the students in one-on-one settings and to attend lectures on the Maharal’s works. The students will also teach classes at neighboring universities.

In conjunction with the local Chabad, the philanthropic Rohr family is sponsoring this project. Barash explains that Chabad’s initiative here is particularly fitting. The founder of Chabad-Lubavitch, Rabbi Schneur Zalman of Liadi (1745-1812), was Rabbi Loew’s direct descendant. In fact, quite a lot of his monumental Tanya is based on his ancestor’s works. The center opened on the 18th day of the Hebrew month of Elul. That day is the anniversary of the Maharal’s passing and, 136 years later; it was Rabbi Schneur Zalman’s birthday.

Immediately before the ribbon-cutting, hundreds gathered at the Maharal’s resting place. Rabbi Yona Metzger, the Ashkenazi Chief Rabbi of Israel, prayed near his grave for a “sweet year” for Jews around the world. Over 250 people gathered on the hallowed stones as Rabbi Metzger, who traveled to Prague specifically for this event, spoke at the building’s entrance. He explained that the Maharal’s eternal influence was due to his being an, “amazing person, teacher, rabbi, and leader.”

Several hours before the event, Barash and Metzger were guests of the Mayor, Pavel Bem, at his home. There they discussed the enormous impact the center will have on the greater community. Bem expressed his commitment to what he believes will “bring Prague’s rich Jewish past to the present.”

Prague was home to 56,000 Jews before Nazi troops marched into town and shuttled many to Terezin and later to Auschwitz. Today, estimates Barash, roughly 9,000 Jewish people live in the Czech Republic’s capital.

“People feel that the center will fill a real hole here,” he says. “They want more than the museum experience that Prague is known for. We will introduce them to the living legacy of the Maharal.”