The Graduates: Jewish Alumni To Keep Ties To Chabad 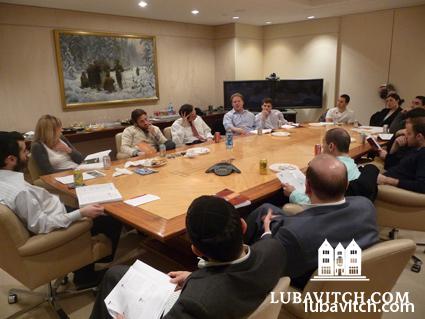 (lubavitch.com) Mortarboards and congratulations will sail across the air at university campuses nationwide throughout May, as students take the big leap from studying the unknown to being there.

Once in possession of the all-important degree, graduates will have to grapple with a terrible job market and the responsibilities of living on their own. For those students who relied on their campus rabbi for a Friday night dinner or a listening ear, being alone on the other side of those hallowed walls can come as a shock.

“When students come to Penn they create a great bond with each other and with the rabbi [Rabbi Levi Haskelevich]. And of course, their interest in Judaism increases. But when they graduate, they are thrown into a really big place and it is hard to find a rabbi they’re comfortable with,” says Dr. Jonathan Abenaim, a cosmetic dentist in New Jersey and a graduate of the University of Pennsylvania’s Dental school.

That’s why he started the  Abenaim Program for Jewish Literacy, which, among other ventures, seeks to provide Penn alumni with a place to reunite and study with their Rabbi Haskelevich  even after they’ve moved on. “This program allows them to keep their Jewish continuity,” he says.

On the first Monday of every month, Haskelevich drives to Manhattan to get together with former students. Some want to talk about their dating lives; others have questions about their job searches or a recent layoff. After the personal meetings, Haskelevich hosts dinner and a class at a midtown office, sponsored by Abenaim.

On campus, Haskelevich keeps in touch via phone, email, and Facebook. Dozens of alumni gather in New York City for a winter Shabbaton and holiday parties he arranges. Haskelevich has officiated at numerous weddings for graduates, does regular counseling, and remains, many alumni tell him, “their only rabbi.”

As director of Chabad at Ohio State University for 13 years, Rabbi Zalman Deitsch has seen his fair share of students flip their tassels to the left. Deitsch turns into a headhunter after graduation, helping match graduates with jobs in their new cities. He believes that the all-consuming search for a good career often leaves graduates’ Judaism somewhere in the dust.

“Sometimes students discard the strides they made in Judaism back on campus, with their funny roommates. They feel they don’t ‘need’ Judaism again until their marriages. It’s a problem bridging the two worlds.” Deitsch tries to alleviate the challenge by keeping in touch with students, hosting reunions, and publishing an alumni newsletter.

Rabbi Mendel Matusof also keeps tabs on the alumni of the University of Wisconsin at Madison. He ships matzah for Pesach and hooks them up with local Chabad centers in their new towns. When he called one former student, she was grateful: “I am not involved with Jewish life anymore, it is really important that you called me and asked me how I’m doing.”

Last year, several Badger alumni formed the Chai Club, as a means of staying connected and giving back. Alumni solicit their classmates for an $18 monthly contribution to help meet the Matusof’s $150,000 annual budget.

“When we were students at Wisconsin, it never crossed our minds to wonder how Chabad was funded. Because of our appreciation of Chabad, we want to ensure that others will have the same experiences.”

One of the members of that board is Adam Poster, a 2008 graduate and a current student at the Touro College of Osteopathic Medicine in Harlem.

“I miss being around students in an easygoing atmosphere,” he says, “we were all there because we were proud and happy to be Jewish. There is no better place to test that commitment than on a college campus where everything is geared to partying and boozing.”

Despite the availability of everything kosher in his New York home, Poster misses the camaraderie and motivation he found in Madison. He keeps in touch with Matusof now, “to tell him what’s going on in my life, for advice, and to keep me on my toes.”

Poster will summer at the Rabbinical College of America in Morristown, New Jersey. In tribute to his time in Madison, Poster hopes to give back to his contemporaries. “Every Jew is holy and special,” he says. “The only reason I know that is because Rabbi and Rebbetzin Matusof saw it in me. They helped me in all ways, not only Jewishly. Now I want to reach out to every Jew.”

Deitsch will reach out to his students one last time on the OSU campus at the annual Shabbaton before graduation. During the final Friday night dinner, a meal that means so much to students at campuses worldwide, Deitsch plans to leave his graduates with a parting message.

“Keep learning. Don’t give up what you have gained in college. And find the Chabad House near you.”