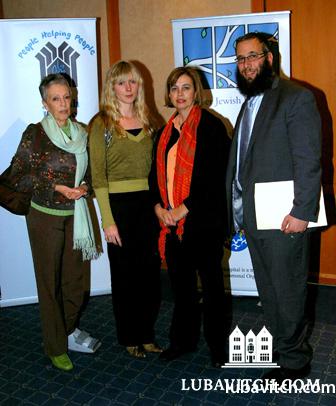 (lubavitch.com) When 19-year old Jonathan failed at a suicide attempt in 2008 and ended up in the emergency room of a busy Sydney hospital, Rabbi Mendel Kastel was there to greet him. When, at various points during the last year, Jonathan destroyed his family’s house, tried to kill himself during Shabbat dinner, and needed a temporary place to live, Kastel was there, mediating, counseling, and providing a home.

The American-born rabbi, whose lilting accent confirms that he has lived in Australia for the better part of two decades, is the current CEO of the Jewish House, a crisis center for the 40,000 members of Sydney’s Jewish community. The Jewish House includes a 12-bed homeless shelter (full every night), two psychologists on staff, chaplaincy and pastoral programs, as well as mediation and advocacy.

Within the last year, Jonathan’s mother Lisa has had to tap into many of those services. “My son has borderline personality disorder and has been through a lot of trauma,” Lisa says. “Once I knew that Rabbi Kastel was involved, I knew I could rely on the Jewish House. One Friday night in December we were celebrating my daughter’s birthday. I think my son got jealous of all the attention I was giving her, and he began one of his explosive temper tantrums. Jonathan locked himself in the bathroom with a knife, overdosed on Tylenol, and threatened to kill himself.

“I rang the Jewish House hotline and Rabbi Kastel came immediately. Thank G-d he has training with suicide prevention. He disarmed Jonathan and took him to the ER. He sat with my son until the psychiatric team was able to see him.

“Having the Jewish House available to us is such a great relief. Before them, we had no one to turn to. We would be totally lost without them.”

Brothers Roger and Anthony Clifford founded the crisis center in 1986. The two businessmen recognized a need in the community for an effective crisis center, without traditional business hours. “When we started, most of the crises in our community were drug-related,” explains Roger Clifford. “We also helped many people leave cults. Jews are more spiritual than most and seek more than others. Sometimes they seek the wrong paths.”

The Cliffords’ endeavor has since broadened to meet the varied needs of the Sydney community. Today, says Roger, now co-president, “there is greater demand than ever for our services. More people are feeling insecure because of the economy and there is a lot more pressure on families.” Financial counseling, a weight loss support group, and crisis prevention seminars are examples of some of the new programs the Jewish House has launched.

But it is at the darkest point in the night, perhaps, that this dynamic organization has the greatest impact. Kastel is on call 24/7, fielding approximately 10 midnight calls per week. The suicide calls, he says, are the hardest.

The Chabad rabbi, who has done rabbinic and counseling work around the world, has found his home at the Jewish House. “I tend to the rabbi part of things, giving spiritual guidance. Part of my responsibility is to know when psychological involvement is necessary. The unique characteristic of our organization is that all different aspects work together so smoothly.”

“When we opened, the community encouraged us to approach Lubavitch rabbis to head the organization. You have to understand, for us it was like approaching men from mars,” laughs Clifford. “Lubavitch was recommended to us as the only ones in the Jewish community who could sustain the program and keep it going. They were the only ones who could be available 24/7. It has been wonderful.”

The Clifford brothers visited the Lubavitcher Rebbe in New York several times. Clifford recalls a 1985 visit, prior to the opening of the Jewish House. “He gave us very, very positive words of blessing that we should be successful. We have a strong bond with the Rebbe.”

The fruits of those blessings continue to ripen in Sydney, as Rabbi Kastel and the Jewish House help those most in need. “Every day is a challenge with Jonathan’s ups and downs,” says Lisa. “Together with the rabbi, we have set up a strict contract for my son’s behavior. When we feel things are slipping, we go for a meeting with him to redefine our goals. Jonathan feels very comfortable with the rabbi and has great respect for him.

“Before this, I had to call the police on Jonathan when I didn’t know where to turn. You have to understand, that is a very difficult position for a mother. It is very hard and very sad that we need them to be there for us. But I thank G-d for them every day.”