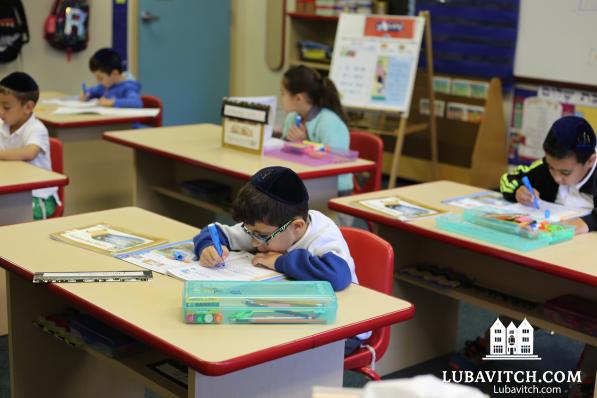 Can Jewish day school education ever be tuition-free?

Leah Aizenman analyzed the question. And then she acted.

There are an estimated 300,000 children enrolled in more than 800 day schools and yeshivas across the U.S. With day school tuition as high as $20,000 a year in many communities, major Jewish organizations have been exploring a solution to the mounting tuition crisis.

Chantei and Avihai Vaturi say the Myrtle Beach educational model allowed them to give their four children Jewish schooling that would otherwise have been beyond their reach. The family relocated to the U.S. from an Israeli coastal city. Avihai craved Myrtle Beach’s ocean and mild winters, but it was the tuition-free Hebrew day school that hooked him.

Founder and principal of Chabad Jewish Academy (CJA) of Myrtle Beach, Leah Aizenman fully understands the predicament. “There is a real crisis facing families who wish to educate their children in Jewish schools. It is overwhelming.”

She and her husband, Rabbi Doron Aizenman, founded CJA in Myrtle Beach in 1987, growing the school one grade at a time. At its peak in 2006, one hundred and twenty children were enrolled in preschool through eighth grade. It is the only Jewish day school in the area.

The economic downturn that began in 2007 hit hard, forcing almost half the parents to take their children out and enroll them in public schools. At first, a group of loyal CJA alumni stepped up to help the school stay afloat. After a few years, the alumni began to question why the community was not more involved.

It was time for CJA to take stock and figure out how it could survive, perhaps even thrive. The Aizenmans created a think tank comprised of concerned parents, community members, and alumni. They conducted a grassroots survey to understand the concerns and needs of local Jewish families.

“Even though my husband and I started the school, we were ready to hear that we needed to make a shift,” says Aizenman.

The results of the survey were clear and consistent. Parents felt that CJA offered outstanding education. But they were unwilling to make deep financial sacrifices to provide their children with a Jewish education, even if it was an excellent one. Survey results in hand, it was time for the think tank to seek a solution.

The brainstorming veered to discussions of the high-tech model: Google, Yahoo, and Facebook are free. Could Myrtle Beach offer free Jewish education?

“We decided that on a small scale, we could take a step that is innovative, maybe even revolutionary,” says Aizenman.

And so JEMB—Jewish Education Myrtle Beach—was launched in 2015. A departure from the private school model in which parents shoulder the burden of paying for their children’s education, JEMB offers every child in the community free Jewish education.

Since JEMB’s launch, fifty-two children have enrolled in the day school, and another fifteen are transported to CJA at the end of the public school day, when they are integrated into activities with the day school children. (There are also fifty children in pre-school, which follows a traditional tuition model.)

To finance free tuition at the day school, each household in the Jewish community, whether they have five children in the school, one, or none–whether they are parents or grandparents of alumni, or have no children at all–is asked to become a JEMB Member for $1,000. Seventy families, representing nearly 80 percent of the families in the community, have stepped up. Business owners were asked for $5,000.

“Our goal is to educate the entire community about the importance of Jewish education, and for the community to want to share in this responsibility,” says Aizenman. CJA has ceased to exist as a “private school.” Instead, teachers are paid from a communal fund. Alumni and other generous donors are committed to matching the community’s participation.

Community-supported education is hardly a novel concept, and is actually described in the Code of Jewish Law (Hilchot Talmud Torah) which states: “The children’s teachers were paid by a community fund, collected from the rich and the poor alike.”

Public schools in the United States have been free since 1639, when the first taxpayer-supported public school opened in Massachusetts. Today, in most locales, taxpayers support free public education on the premise that it provides social and economic benefits to society as a whole and promotes the common good.

In Israel, the native country of most Myrtle Beach Jewish families, the government offers free secular and Jewish education to all children. The typical Israeli family in Myrtle Beach with three or four children is not accustomed to making financial sacrifices to cover the costs of Jewish education.

Jewish Education Is Not Only for the Rich

“Jewish education shouldn’t be only for the rich. Everyone should have access,” says Seven Seas Beachwear owner Eti Kugman. She and her husband, Shai, have four children, three of whom are still at CJA. Since the school currently offers no classes beyond fifth grade, their eldest daughter, Shachar, attends public school. Eti said that her daughter was so well prepared by CJA that she quickly attained honor roll status at public school.

“When we had all four kids in the Chabad school, it was financially difficult,” says Eti. “You don’t want to constantly ask for scholarships. Not everyone wants to discuss their finances. JEMB allows people to put economic considerations aside when choosing a school. It gives every Jewish child a chance to learn in CJA.”

“Leaps and Bounds” Ahead of Public Schools

Aviv Shamah, 32, is one of several CJA alumni who helped launch the free tuition initiative. He’s confident that, in addition to offering a stellar Judaic curriculum, CJA offers a better secular education than the public schools that surround it. “Graduates of CJA are leaps and bounds ahead of their public school peers,” he says.

Now, married with a two-year-old, he is beginning to recognize the financial implications of paying tuition. He believes that JEMB presents a clear, compelling marketing message. “I see the impact CJA had on my own life. That’s why it resonates for me.”

With an average class size of ten children or fewer, CJA offers a high level of individualized instruction. CJA also offers special education and programs for gifted children. They focus on new developments in brain research to develop leading edge pedagogical approaches and other innovations.

In the hopes of attracting new families to her community, Aizenman attended the OU Jewish Community Home and Job Relocation Fair in New York. There she touted the benefits of life in Myrtle Beach, which include the climate, pristine beachfront, low cost of living, professional opportunities, and tight-knit Jewish community. Chabad of Myrtle Beach offers a minyan three times daily, and there is a kosher supermarket. But surely free Jewish education is the pièce de résistance for families considering a move to Myrtle Beach.

“We got even more than were were looking for when we moved here,” says Chantei. “My children love the school. They feel loved and appreciated for who they are.”

Aizenman anticipates seeing more families like the Vaturis move to Myrtle Beach as a solution to their personal tuition crisis. And other Jewish day schools are likely to take note of the JEMB model.

Dr. Marvin Schick, senior consultant at the Avi Chai Foundation and a former professor of constitutional law, noted that in smaller communities where it is more challenging to maintain local day schools that offer a high standard of education, tuition is invariably on the high end. “Some schools take the position that if parents cannot or will not pay what we are asking, so be it, even if this means that children are deprived of a meaningful Jewish education.

“The story is quite different in Chabad institutions, and what is happening in Myrtle Beach is one illustration of this difference. The prevailing attitude in Chabad schools is not to put tuition first, but to put the Jewish future of the child first.”

Parents felt that CJA offered outstanding education. But they were unwilling to make deep financial sacrifices to provide their children with a Jewish education, even if it was an excellent one.