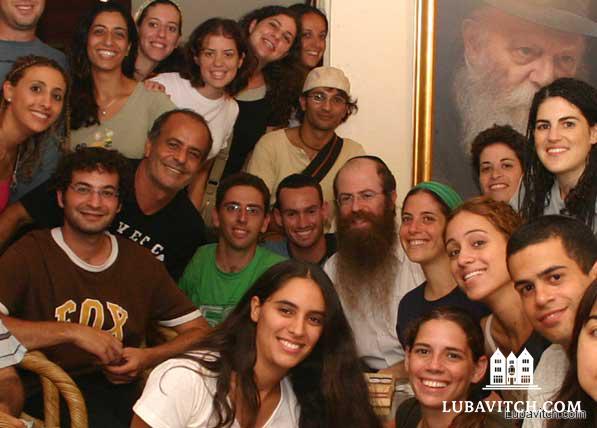 To perpetuate the memory of their sons, kidnapped and slain in 2014 by Palestinians, the mothers of Gilad Shaer, Naftali Fraenkel and Eyal Yifrach established the Jerusalem Unity Prize.

This week, the prize was awarded to four winners individuals, among them Rabbi Nechemya Wilhelm, a Chabad representative in Bangkok, Thailand, who was acknowledged for promoting “unity in the Jewish community over an extended period of time.”

“The goal of this prize is to unite all the different segments of the Jewish nation in Israeli, to strengthen the tolerance and mutual respect in our society,” said Jerusalem Mayor Nir Barkat, at the ceremony.

Other awardees were: Re’ayah and Yossi Apner, Ram Shmueli and Rabbi David Menachem.

The Chabad House in Bangkok established in 1993 welcomes tourists, including hundreds of Israeli backpackers on a weekly basis. Although the Chabad facility in Bangkok is large, and includes a synagogue, social hall, a subsidized Kosher restaurant, a communication room used by tourists to make contact with their families, there is good reason, says Rabbi Wilhelm, that it is called a Chabad House and not a Chabad center. “This is a home, where everyone is family and all are welcome with no strings attached,” he says.

There are currently five Chabad Houses in Thailand.

Wilhelm received the prize on behalf of Chabad of Thailand and the two million people who’ve come through the doors of Chabad in the last 20 years.

“It is a tribute to you, for placing your differences on the side and illuminating the Jewish spark inside our soul that unites us,” the rabbi said.

Yoram Igal, a local Israeli expat who manufactures leather wallets, has come to know Chabad, and Rabbi Wilhelm well. “Compared to what you do this prize is minuscule,” he offered.

Related Articles
View All
A Decade of Jewish Unity
Celebrating 10 Years of Chabad in Thailand” was held last Monday at the Brooklyn Marriot Hotel, drawing over three hundred friends and supporters of Chabad…
Bangkok Air Now Serving Kosher Meals
(lubavitch.com) Kosher observant travelers flying Bangkok Air out of Suvarnabhumi Airport in Bangkok can now enjoy dinners prepared by the airline’s caterers under the supervision of…
Thousands Observe Rosh Hashana In Thailand
For Israeli backpackers, Thailand–geographically and culturally remote from Israel–offers an escape from the tensions of home. By association, that has sadly come to mean anything…
A Miracle in Thailand
When Avi Azuly’s father called his son’s hospital room in Thailand, what he heard on the other end was totally unexpected. He heard the haunting…
Jews Stranded in Bangkok
(lubavitch.com) With Bangkok’s airport shut down by anti-government protesters, Chabad of Thailand is prepared to host a greater number of visitors, mostly Israelis stranded in…
Post Tsunami Pesach in Thailand
It is 5:00 a.m. and dawn has not yet broken in Bangkok. The typically teeming streets are bathed in the stillness of morning and there…
Chabad Opens in Ko Samui, Thailand
Ko Samui, an island of beautiful beaches and breathtaking scenery in the Gulf of Thailand, is a popular destination for tourists and backpackers. An hour…
Get Inspiration to your inbox!
Newsletter
Join our weekly newsletter for inspiration and updates
Donate
Find Your Local Chabad Center
Chabad
About Chabad-Lubavitch
About Chabad Lubavitch
The Rebbe
Headquarters
Magazine
Magazine
News
News & Updates
In The Media
Impact
Social and Humanitarian
Social and Humanitarian
Education
Education
Community
Community