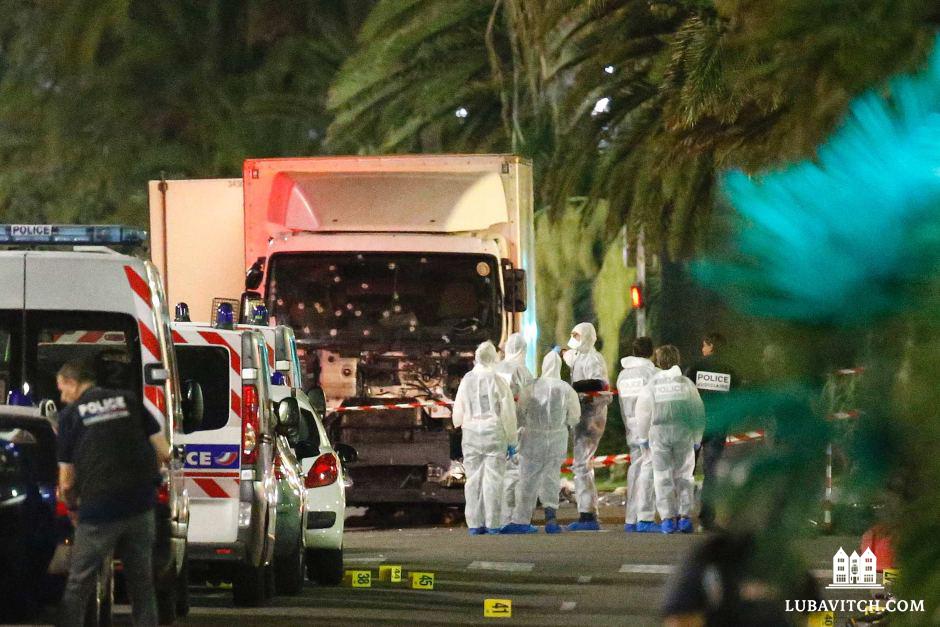 At least 84 people were killed Thursday night when a male driver plowed a large truck along the pavement of Promenade des Anglais, the the famous boardwalk of Nice, France, mowing down a crowd that had gathered to watch fireworks in honor of Bastille Day. Officials say another 100 people were injured by the carnage and the driver was shot by law enforcement. In a national television address, President Francois Hollande said “we cannot deny that it was a terror attack”.

Lubavitch Headquarters spoke with Rabbi Yosef Yitzchok Pinson, the head Chabad emissary to Nice, estimated at about 25,000. Pinson says that he has met with Nice’s Mayor at 3 am Friday morning to discuss heightened security for the city’s Jewish community. Chabad is working closely with local authorities to ensure the safety of all its community members and is carefully following instructions by authorities.

As of this writing, Pinson is aware of five local Jews who were injured in the attack, one in serious condition. While “bodies on the street are still being identified,” he has no knowledge that anyone from the Jewish community was among those tragically killed in the attack. Most families connected with the Jewish community, he says, have checked in and are accounted for. “We are devastated at the tremendous loss of life and hope that we do not hear of more casualties,” he continues. Chabad has been in touch with the families of the affected and will be visiting them in the hospital tomorrow with Shabbat meals and “anything else they may need.” The various local Chabad houses have also offered humanitarian services to the many displaced and injured at the scene, and has extended its assistance to anyone that needs help.

Four of Chabad’s camp counselors were at the terror scene at the time of the attack and were unharmed in what Pinson describes as a “miracle.” Chabad of Nice runs a local day camp for over 250 children, and brought down girls from Paris and other locales as counselors. The counselors were among the crowd watching the fireworks on the Promenade des Anglais and stood a few feet in front of the truck moments before the attack. “A minute before the driver began mowing down people, one counselor suggested to the others that they cross the street. As they began walking, the truck passed right by them,” Pinson recounts. “It was a miracle that they had just moved. The truck drove over the spot where they were standing moments before.”

The girls saw tens of people killed, including “babies in carriages and elderly,” before they ran to take shelter in a nearby restaurant. They were located a few hours later. Pinson says the counselors are severely traumatized by the carnage and the loss of life they witnessed. Chabad is arranging for them to receive professional counseling to deal with their trauma.

The Chabad camp will be canceled on Friday, in keeping with directives from the mayor’s office, but will reopen on Monday as usual. All Chabad services throughout Nice will remain open on Shabbat. Pinson and fellow Chabad rabbis will be hosting large Shabbat events in many of the local synagogues to raise the morale of the city’s residents.

“We cannot let terrorism win,” Pinson says. “In the face of such evil, we need to make sure that goodness and light prevail.”