Tefillin on the Run: Chabad at the Comrades 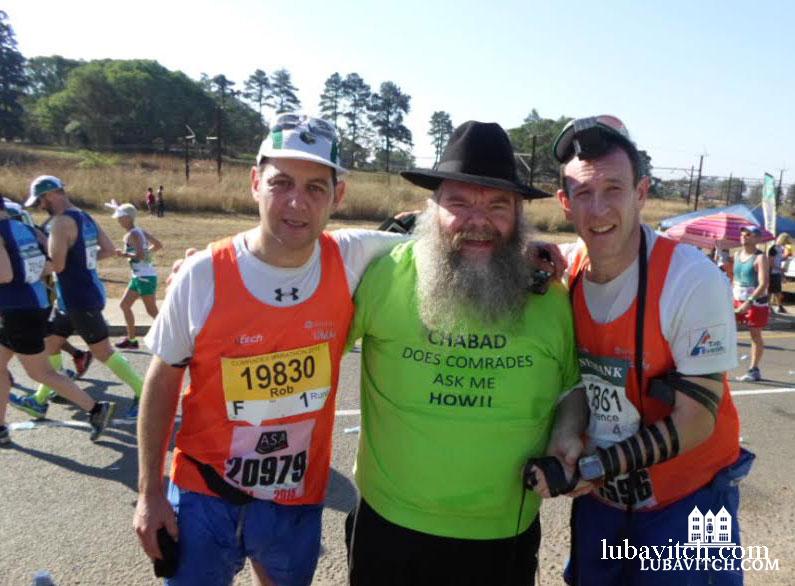 At 90 kilometers, or 56 miles, the world’s oldest and largest marathon is billed as the ultimate human race. When the gun goes off this Sunday morning at 5:30, 20,000 runners will descend from the Kwazulu Natal town of Pietermaritzburg to Durban on the sea. Along the way, they will be feted by course-side bands and adoring spectators. And Rabbi Shlomo Wainer.

The rabbi at Chabad of the North Coast in nearby Umhlanga Rocks, has been a fixture at the midway point for more than two decades. He offers up Tefillin (on the run if requested), a kosher snack, and non-stop encouragement.

“When I ran my first race 11 years ago, I wasn’t sure if I would have time to stop,” says Ryan Perel. “But after being on the road for so long, it was such a welcome sight to see him. I immediately ran into his arms and gave him a huge bear hug.”

The 38-year old insurance broker from Johannesburg has logged 1200 kilometers in training since January. He arrives in Durban on Thursday and heads straight to the weekend’s highlight: the Comrades Shabbos at Chabad. Some 150 runners and their supporters share the Friday night meal together, where they enjoy hearty pre-race fare, a talk by a noted athlete (this year Helen Lucre, three-time Comrades winner), and a strict 9:30 ending. Shabbat morning, says Perel, is when Wainer gives the novices extra attention and aliyahs, “to calm their nerves and make them feel good.

“To be able to be involved in a physical and mental event, and to have this level of spirituality added is a great part of the weekend,” he states.

South African born Wainer remembers watching Comrades with his family on television as a child. Until 1975, TV was banned in the country, except on election day and during the marathon. When in 1994, a friend asked him to come support him on the course, he ended up spending the day there handing out hugs and smiles to many different runners.

That friend is Arthur Zimmerman, who at 74 is still a competitive athlete with 20 Comrades finishes under his belt. His best time is 6 hours and 53 minutes.

“Comrades in South Africa is almost a religion,” says Zimmerman. “It is the ultimate test of human endurance. For a human to run 90 kilometers is very, very hard, beyond normal endurance. He needs help from G-d to accomplish that. And that’s what the rabbi is, our connection, our divine inspiration.”

On the course, Zimmerman would stop for a hug and then continue, hand on his head as he recited Shema. “I wouldn’t call myself all that religious, and I’m a serious runner so I don’t want to take too much time,” he explains. “Rabbi isn’t only there for the Jews; the gentiles get so much encouragement from him as well. People are used to seeing him along the race, he is a fixture.”

The race alternates directions each year, either uphill from Durban to Pietermaritzburg or downhill, in reverse, as is the case this year. Wainer waits at roughly the same spot, around the 60-kilometer mark, in the town of Hillcrest. Though this year’s course is officially downhill, the first half involves a painful incline. Runners, already exhausted, will schedule quick stops to meet the Rabbi and their friends, at his station. Before they push on.

“The race begins too early to put on Tefillin beforehand,” explains two-time runner Cecil Bergman, making the opportunity with Wainer a runner’s only chance in this race that can last 12 hours. “The first year I ran, I thought I missed him and I was distraught. And then when I saw him, it was fantastic.” Bergman, a dentist by trade, lives in Israel. Performing in this “amazing mental and physical challenge” helps him on a spiritual level as well. “A healthy body and a healthy mind make it easier to concentrate on my prayer.”

Last year, Wainer and his crew helped 55 men do the mitzvah. In one video, that went viral the next day, a young teen is seen wrapping the straps on a runner, in motion, as he runs backwards keeping pace. “Ladies stop too, to say a bracha on some food or to recite Tehillim or give tzeddaka,” says the rabbi.

When Zimmerman ran his final Comrades in 2008, he was awarded the prestigious Double Green Number for completing 20 marathons. But he didn’t keep it.

“I gave Rabbi Wainer my most treasured possession, my Double Green Number. He helped me get it and I was proud to give it to him with all my heart.”