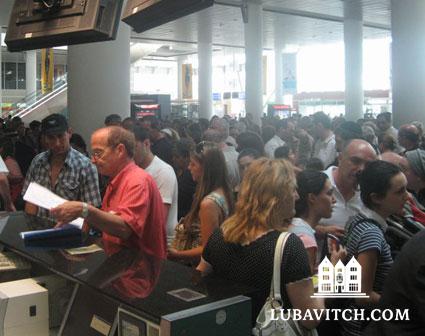 At the Tbilisi airport last Tuesday, when thousands were trying to get out of Georgia. (photo:lubavitch.com)

(lubavitch.com) Within Georgia's Jewish community, many have fled to Tbilisi, others got aboard planes evacuating Jews to Israel, and still others, on vacation in other parts of Georgia when the fighting erupted, cannot get back to Tbilisi.

While Russia has signed a peace agreement with Georgia, its forces have yet to withdraw, and life in Georgia will be a long way getting back to normal.

Lubavitch.com tracked down several members of Tbilisi’s Jewish community and learned that overwhelmingly, the sense is one of uncertainty, with many wanting to get home, and still others ready to get on the first plane to Israel at a moment’s notice.

Mamuka Fidzhhadzeh is at a resort town on the Black Sea, where he was vacationing with his family when hostilities erupted. The parents of two teenagers and a 7 year old daughter, Mamuka and his wife are anxious to get home. That means driving through Gori, which is impossible.

“The Russians have closed access to Gori, and we have no way of getting back.” So the Fidzhhadzehs, like many others who, for better or for worse, were away when the Russians attacked, don’t know when they’ll get back home.

Back home in Tbilisi, some who’ve tried to get out, couldn’t.

In the Shayab home, suitcases stand ready to go at their door since last Monday, when Yitzchak, his seven-month pregnant wife and three children were forced to return home after waiting for hours at the Tbilisi airport.

Though his visas were in order, the person at the counter “gave us some excuse for why she wouldn’t let us through, and insisted that we go to the back of the line. There were some 700 people on line,” says a frustrated Yitzchak, and his wife and children couldn’t stand that many more hours. They went back home.

“We were sure that everyone had left, and that we were the only Jews left in town,” he said. To his great relief, Yitzchak found that though the streets are quieter, with less activity, the Jewish community continues to function normally, with regular daily and Shabbat prayer services, and new faces from the Gori refugees.

“Even the trash collection and mail deliveries are functioning on normal schedule,” Yitzchak says.

But with Gori only a 40-minute drive, the Shaybs are on edge.

Roshel Chaimov, also a father of three, is no less anxious. His wife was at the Israeli embassy on Friday, “but they told her to come back on Monday for visas,” he says.

Though many worry that Russia does not intend to withdraw, the Georgian Jews we interviewed said they were hopeful that matters will return to normal, and that they will not have to leave.

Indeed, only a small handful of the hundreds who’ve left on the emergency flights last week, have sought to make aliyah. The rest, it seems, will want to return when matters settled down.

At the local Ohr Avner Chabad pre-school, 8 families from Gori have set up “home” where they are waiting out the situation. Hundreds more have been given shelter by the Jewish community and the Jewish Agency.

Rabbi Kozlovsky, who worked with the Israeli embassy all of Tuesday to coordinate the evacuation of hundreds of Israelis and Georgian Jews, says that thankfully, the Jewish community does not know of any casualties.