Take Two: Chabad at the Movies 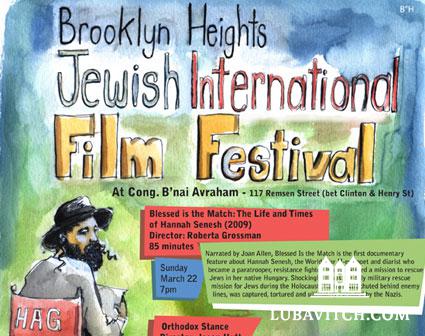 (lubavitch.com) When the lights dimmed at Congregation B’nai Avraham Sunday night, the audience settled in with fresh popcorn and coke for a night at the movies.

In choosing films about Salita, Hannah Senesh, and Israel Lifshutz, Weinstein hopes to counter what he describes as rampant “negative portrayals of Jewish people, especially Jewish women, in the media and Hollywood.”

Weinstein is no stranger to the arts himself. He attended the Manchester Metropolitan University where he received a degree in film history. After graduation, he worked as a film location manager in England. Then he encountered Chabad and altered his own life’s script.

“Today,” says the lively rabbi whose Chabad center serves five Brooklyn campuses including Pratt Institute, “I straddle two worlds. I started off at art school and I am back here again as a rabbi. My goal is to use my background in the arts to spread Judaism.” In addition to this festival, Weinstein has hosted a spiritual art show where students expressed their Judaism through various art mediums.

That fusion is important to 25-year old filmmaker Saul Sudin an expert on the Jewish role on the silver screen. “There has been a plethora of Jewish filmmakers over the years (one can even say Hollywood was created by Jews),” he explains. “But those Jews changed their names and produced films with Americanized ideals like romances and westerns. It was only in the last 30 years or so that people started to say, ‘Here I am. I’m Jewish. I’m not afraid.’ My generation needs to take that a step further.

“Jewish films have become synonymous with Holocaust films,” continues Sudin. “I believe there are millions of other aspects of Jewish life that are meaningful and beautiful. There are so many more places we can go.” The movie aficionado has incorporated Jewish themes into the documentaries, feature films, commercials, and television programs he has created.

Yisrael Lifschutz brings Chasidic flavor (including a bona-fide beard) to hundreds of movies, including several blockbusters. He is also the go-to-guy when movie producers need a Chasidic character or advice. In founding the Hassidic Actors’ Guild (HAG), Lifschutz aimed to “safeguard the proper image of the Jew in Hollywood.

Over the years,” he says, “I have continually locked horns with producers and directors about the image of a Jew, that they shouldn’t always be the foil.” His mocumentary, about HAG’s founding, will screen Sunday at the festival.

At last night’s event, filmmaker Sudin manned the projector, ensuring that the audio and visual were up to par. “Here is a documentary that talks about this balance that we have,” he said. “We can have our Jewish life and be proud of it while still achieving success in any professional area we choose.”

For Jason Hutt, the Brooklyn producer of “Othodox Stance,” his three and a half years trailing Salita with a hand-held recorder left a powerful impact on him as well. The film explores Salita’s rise from secular Russian refugee to religious boxer in tolerant America.

“When I started filming in 2002, I didn’t know where I wanted to go with it,” explains Hutt. “But the film quickly became about how Dmitry Salita manages to balance his observance of Judaism with his unusual occupation.

“At the time I was exploring my own relationship with Judaism,” Hutt continues. “And I have become more observant myself since meeting and working with him.”

Salita’s punch scores a knockout out of the ring as well.