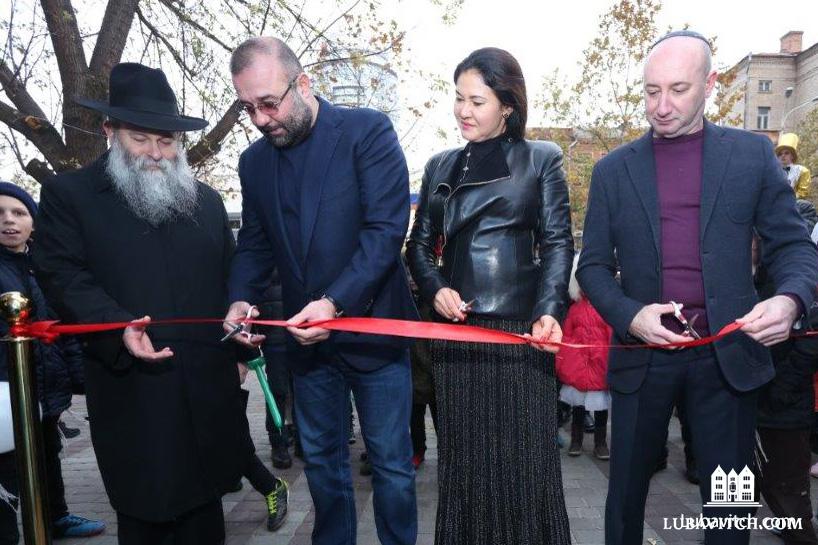 Rabbi Kaminezki and supporters at the ribbon cutting

In a place where Jewish activities-were once conducted  in secret, the Jewish community of Dnipro, Ukraine celebrated the renovation and reopening of its orphanage for boys on November 11.

The orphanage is housed in the historic synagogue of the Kabbalist Rabbi Levi Yitzchak Schneerson, father of the Lubavitcher Rebbe and chief rabbi of the city from 1909. After his arrest in 1939 for his activism on behalf of Judaism in the Soviet Union, the synagogue was confiscated by the Soviets and turned into apartments and offices.

After the building was returned to the Jewish community in 1995, Rabbi Shmuel Kaminezki, the city’s current chief rabbi, teamed up with Rabbi Yerachmiel Benjaminson, of Tzivos Hashem in New York, and supporter Alexander Koganovski, opening Chabad’s Esther and William Benenson Home For Boys in the building (a sister orphanage for girls is housed elsewhere).

After two decades of use and hundreds of children passing through its doors, the orphanage temporarily relocated to allow for the much-needed renovation to the rundown structure. Now, thanks to the support of local businessman Alexander Petrovvsky and community board member Alexander Turchin, it is a beautiful, modern children’s home.

Speaking during the celebratory dinner after a tour of the renovated home, Kaminezki said: “Years after he and his disciples were persecuted for his activities, Rabbi Levi Yitzchak, the original rabbi of this synagogue, must be full of joy to see ‘his’ children now flourishing in here, under a government that protects and supports the Jewish community. And in this now beautiful, comfortable, and up-to-date home.

For more information and to support Chabad of Dnipro, visit www.DJC.com.ua.