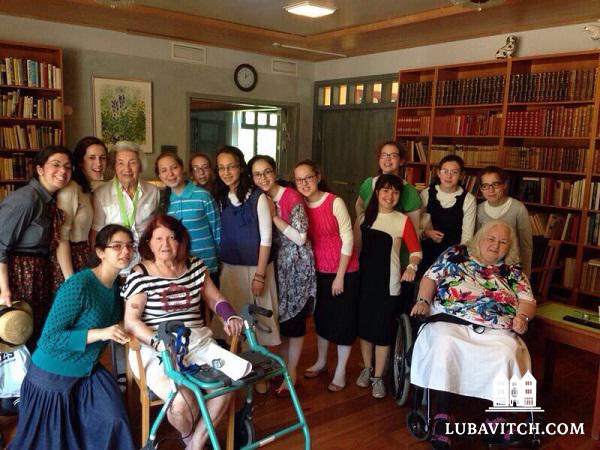 Girls from Europe visiting with the elderly at a senior citizen center in Gothenburg.

Among the elderly at an old-age home in Gothenburg are survivors of Nazism, concentration camp inmates who were transported to Sweden on the White Buses in the spring of 1945 by the Swedish Red Cross. They were from Hungary, Poland, Czechoslovakia and other German occupied countries, where they remember their childhoods in once lively Jewish communities that had been decimated.

It’s been years since they heard a Jewish child speak in Yiddish or in their native tongues, but this summer, when the Chabad camp in Gothenburg went visiting them on a Friday afternoon, one elderly resident, originally from Hungary, was brought to tears. She was approached by 11-year-old Ari Raskin, the son of Budapest’s Chabad representatives, who spoke to her in Hungarian, wishing her “a Gut Shabbos.” The last time she’d heard this from an observant Jewish child with a yarmulke, speaking fluent Hungarian, was a distant memory.

Eleven year-old Chaya Wolff, from Helsinki, made this her third summer at the camp. She talked about the camp’s visit to the Gothenburg senior-citizen center where she brought challahs and candles to the elderly Jews. “Many of the people here have no one visiting them, so it made them so happy that we came and wished them ‘Gut Shabbos.’”

And from Vilna, 13 year old Devorah Leah Krinsky spoke in Yiddish about Jewish life in Russia to several residents who thought it all ended with communism.

“It was inspiring for these courageous, elderly Jews who witnessed Europe go up in flames, to see a vibrant continuity of Judaism through these children from all over Europe,” says Chabad representative to Sweden, Leah Namdar. “A little bit of light can dispel a lot of darkness and our campers brought so much light to the community here.”

Seventy campers at Camp Gan Yisrael Tzeirei HaShluchim Sweden (a project of Chabad of Sweden, Merkos and MyShliach) all children of Chabad-Lubavitch Shluchim in Europe, left their mark as they went about their activities, camp trips and community volunteer efforts fearlessly, proudly identifying as Jews, enjoying their summer while ever mindful that they serve as role models of Jewish pride and commitment.

Representing Jewish communtiies from Azerbaijan, Austria, Belgium, Denmark, England, Finland, France, Germany Greece, Holland, Hungary, Lithuania, Russia, Slovakia, Sweden, it was an opportunity for the 7-15 year olds to bond with peers who find themselves in similar situations—often the only religiously observant children in their communities, many who live in places similarly inhospitable to Jews, where growing anti-Semitism has become a sinister reality.

Among these places, Sweden has yet to take a stand against the hatred it has allowed to run rampant in the media and on the streets. Ilya Meyer, an outspoken Jew living in Gothenburg has posted an alert on his Facebook offering that by 2025, “all Jews openly professing their religion and ethnicity will have exited this country, while a dazed and sometimes cheering Swedish government looks on, idly.”

The Namdars insist that “This is not ok and cannot be allowed. Every government’s first responsibility is to protect the safety of its citizens,” says Rabbi Alexander Namdar, who maintains that while Jews must be vigilant, “The last thing we want to do is to disappear.”

He and Leah, mentors to many among Gothenburg’s Jewish community of 3,500, are ramping up their activism to engage Jews with a meaningful, supportive and positive experience of their identity, intensifying their efforts, he says, “to strengthen our bond as Jews, with G-d, Israel and our people.”

After a recent whatsapp blast to her list, Leah got a deluge of messages from Jews she hadn’t heard from in months. “I was amazed at how many messaged me to say that they’ve begun to light Shabbos candles, take on various mitzvot such as kosher and mezuza, and pray for Israel and the Jewish people.” The situation, she says, is driving Jews to greater unity and connection with Israel and Jewish life.

“We need to celebrate our Judaism, not in fear or resignation, but joyfully, as free people, proud, informed and united.”