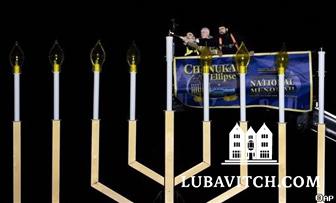 Obama introduced Sotomayor calling her an "an inspiring woman” who has the respect of her colleagues on the bench. "My heart today is bursting with gratitude" Sotomayor said after being introduced by Obama.

In a case concerning a public menorah display brought before her in 1993, Sotomayor then a district court judge, ruled in favor of allowing a Chabad menorah in a city park and struck down a city council resolution barring “fixed outdoor displays of religious or political symbols in parks."