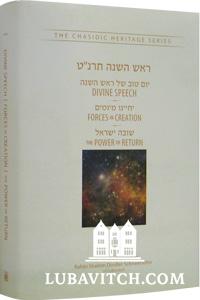 Divine Speech, Forces of Creation, The Power of Return

Editor’s Note: Today,  20 Mar Cheshvan on the Jewish calendar, marks the 155th birth date of the Fifth Chabad Rebbe. The following is review of one of his classic discourses, foundational to Chabad Chasidic philosophy and widely studied in Chabad yeshivot. The review was published in the most recent issue Lubavitch International.

There is a certain beauty, perhaps even intimacy, in tracing a person’s train of thought as he pursues and examines a matter of intellectual depth. A modern audience has been given just such an opportunity with a satisfying and intriguing collection of three discourses from a series [hemshech] of discourses delivered in 1898 by the fifth Lubavitcher Rebbe, Rabbi Shalom DovBer, known as the Rashab.

On their surface, the discourses presented in this handsome volume are precipitated by a question of Jewish law, concerning the suspension of the positive commandment to blow shofar on Rosh Hashanah when the Jewish holiday occurs on Shabbat. How can the rabbis have suspended an important if not primary positive mitzvah over the worries of possibly causing someone to transgress another, negative mitzvah inadvertently?

Perhaps it is the ancient Jewish way to answer one question with another question but the Rashab here embarks on a quintessential Chasidic journey, looking not just to find an answer to a perplexing conundrum but to re-evaluate the question in terms of the primordial purpose of Man in this world, and by so doing, reveal depth and meaning to our spiritual identity.

A wise person once told me that any part of the Torah offers a prism through which one may peer into the source of all things, and so it seems here. These relatively short discourses cover an arresting array of Chasidic concepts and thoughts which should linger even after the main drift of the discourse [maamar] has receded. We are introduced to cause and effect [ila v’ulul], transcendent divine energy [sovev kol almin] as opposed to immanent divine energy [memalei kol almin] and run and return [ratzo v’shov] amongst other hat pegs in the Chasidic lexicon. The richness of these terms and their significance demands a familiarization with their usage over many pages of Chasidic literature, and so trying to grasp them here, in one shot, may be ambitious.

Nonetheless, these three talks are each prefaced with an accessible introduction which is immensely helpful in setting the stage, especially if one is encountering a Chasidic discourse (maamar) for the first time. Chasidic discourses (maamarim) are rarely studied and contemplated just once, as Chasidim are predisposed to study, review, review again and keep returning to a maamar until it seeps into and imprints itself on their grey matter and they are able to stride in intellectual unison with its ideas. The Rashab understands this as he takes up the question wrestled with by his Chasidic forebears, including the first Chabad Rebbe, the Alter Rebbe, and notwithstanding the passing of generations, we too are now afforded the chance to journey with the Rashab, and albeit briefly, see things from his mind’s eye.

In the first maamar the Rashab uses the perennial legal [halachic] question over blowing shofar on Rosh Hashanah [when it coincides with the Sabbath] to springboard into a discussion about the timing of Rosh Hashanah and the creation of the world. It must come as a surprise to some of us that although the Jewish new year is celebrated around the world with the unambiguous words from the machzor: “Today is the birthday of the world; on this day He calls all the created beings of the world to stand in judgment,” the Torah establishes that the world was created six days earlier, on the twenty-fifth of the Hebrew month of Elul.

Furthermore, as the Midrash states, G-d initially thought to create the world with the attribute of Severity/ Judgement [Midat ha’din] but when He saw it could not endure, He combined the attribute of Mercy [Midat ha’rachamim] with it. A parable to this account of the world’s origin is provided later in the same Midrash of a king who intended to fill his fragile cups with liquid, but concerned that hot liquid would crack the cups and that cold would congeal in them, he mixed the hot with the cold to preserve the cups he wanted to fill.

From this deceptively simple analogy of pouring into fragile cups, the Rashab draws us deeper into this thinking on the relationship between giver and receiver, how our collective body [Knesset Yisrael] has  the feminine aspect to receive G-d’s essence, and how speech draws down, expands and intensifies the intellectual ideas and emotions that precipitated verbalization. This is helpful to recall during our preparations for Rosh Hashanah, as the verses we will utter physically and out loud during the long holiday services, are not simply a recitation of text but a vehicle to empower and enliven our heartfelt prayers.

The second maamar picks up on the theme of kingship [malchut] which permeates the focus of our service on Rosh Hashanah. It is a feature of coronations that the people induce and inspire the expression of sovereignty in their monarch by total submission to his rule, which in turn triggers the king’s will to reign over his subjects. Our service on Rosh Hashanah follows a similar path, in that during the course of the two days of the holiday, the Jewish nation hastens a renewal of G-d’s sovereignty over creation, reciting verses of Torah to ignite our higher powers embedded in G-d’s essence to awaken His Divine Will to rule once more. Once it becomes clear how invested we are in the Torah and in revealing our essential connection to G-d through the Torah, it is hard to imagine ever approaching, re-living and reciting the scriptural verses throughout the High Holidays the same way again!

As in other volumes in the Chassidic Heritage Series, an essential study aid is provided to readers in the form of annotations at the bottom of each page. (As an experiment, I tried reading through the first maamar without consulting the notes which was briefly enjoyable but increasingly self-defeating as more explanation was required.) Even with these notes I was still left with striking questions from the plain reading of the text that might have been addressed, such as what it means to say the body “coerces” the soul to live inside the body, especially at a stage when it is undeniably inanimate. Another question I had about how the souls of Israel engaged in Torah and mitzvahs achieve revelation of the four levels of light (i.e. spiritual energy) of G-d’s Essence, was left hanging until addressed in a later maamar.

The third and final maamar in this series, following on the heels of the previous two discourses, and delivered on Shabbat Shuvah which falls between Rosh Hashanah and the holiest day which is Yom Kippur, naturally deals with the topic of return/repentance [teshuvah]. Returning to the analogy in the Midrash of the fragile cups, the Rashab aligns the heat of the hot liquid to the aspect of severity and the cold liquid to the aspect of mercy. In the case of the hot, the cups [“the souls of Israel”] would crack, as no person could live under such strict and exacting judgement, and in the case of cold, the liquid would congeal and the cups would not be clean, meaning under unlimited kindness people would be enticed to sin. The Rashab thus explores the relationship between love and fear of G-d as they play out within us, and how they propel us toward teshuvah, which is also termed reconciliation [pesher], as it combines both mercy and judgement.