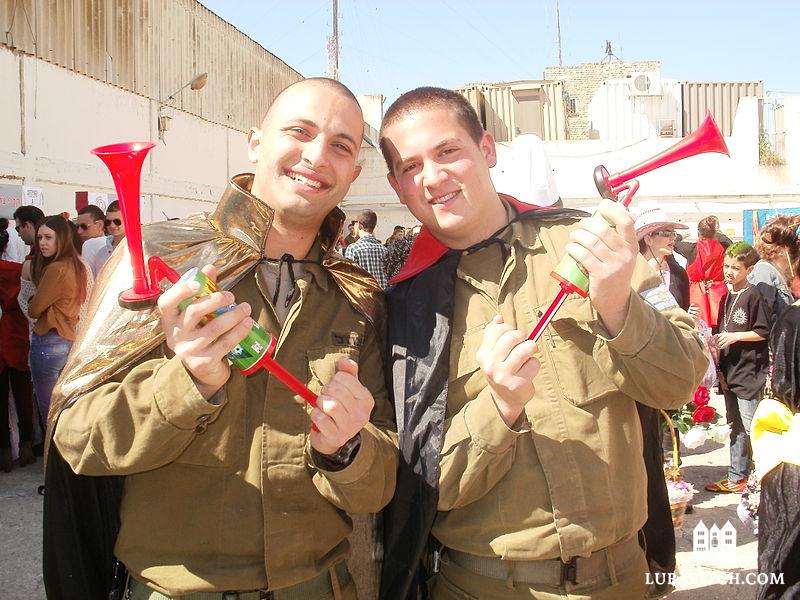 Purim, the most joyful day on the Jewish calendar, usually coincides with early March. The holiday this year takes place on the eve of February 28 and lasts through Thursday, March 1st on the Gregorian calendar. While the Israeli army makes every effort to help its members observe Purim, IDF soldiers in the border patrol units can have a lonely time of it.

Teenagers across the small, Middle-Eastern country spend their holiday traveling. At Yeshivat Beit Menachem Mendel in the northern city of Safed, Chabad students will be celebrating on the bases in Israel’s northern region. The students will read the Megillah, distribute triangular-shaped Hamantash cookies and get the soldiers dancing.

“The soldiers are risking their lives, and they don’t get to see much of other people, so it’s an honor to bring them good cheer on Purim,” says Mendel Wineberg, a student at the Yeshiva. Wineberg grew up in Cape Town, South Africa where his parents are Chabad representatives. Like other students at the Yeshiva, he is no stranger to bringing the joy of the holiday to wherever a Jew may find himself, be it a nursing home, a street corner…or an army base on Israel’s Lebanese border.

Conditions on the northern border are difficult during this time of year, as the mountainous region is wetter and colder than most parts of the country. “Recent events on the Syrian border have increased the pressure on the soldiers,” shares Rabbi Sholom Ber Hertzel, “we make it our goal to put a smile on the face of every soldier in the area. These men and women are there to protect the Jewish people, and we are there for them. In some cases, we need 4x4s to reach their positions.” Rabbi Hertzel and his wife Devorah direct Chabad of the Towns of the Golan Heights,

The visits are coordinated through Chabad centers in each area and the chaplaincy of each base. This year 50 northern bases will be visited over the course of the Purim holiday. For more information or to be part of this mitzvah visit beismm.com/purimidf