After encountering anti-Semitism in their community, Jews and non-Jews unite to show support 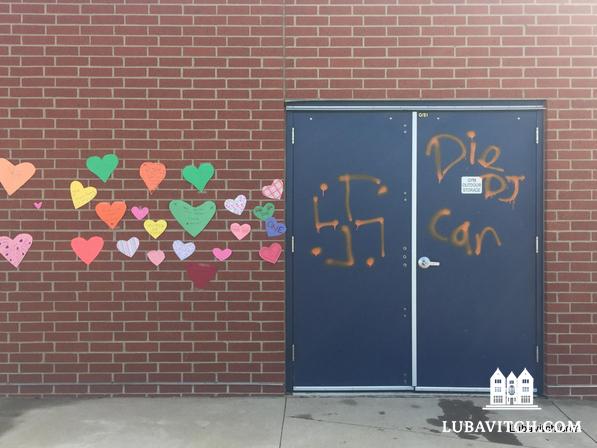 Community members post messages of love and acceptance at the site of the graffiti.
Photo Credit: Neil Rosenfeld

All News
By Esther Gopin

It was the weekend before Thanksgiving when the Isabella Bird Community School in Stapleton, Denver, became the target of vandalism. Swastikas and anti-semitic slurs were spray-painted on doors of the school building and in the playground.

Incidents like these are not uncommon, but the community’s reaction to it is. Stapleton residents of different religions gathered to post warm messages of love and support at the scene of the crime, displacing bigotry with expressions of acceptance of all.

“It was heartwarming to see all the beautiful messages of love and support at the scene of the incident,” said Rabbi Mendel Popack, who runs the nearby Stapleton Chabad Jewish Life Center with his wife, Estee.

Stapleton residents didn’t stop at just love letters, though. Anna Luebbert, a Stapleton local, reached out to Estee Popack with an idea.

“After the incident occurred, several Jewish residents were scared and reluctant to decorate for the upcoming holiday of Chanukah for fear that they would be targeted,” explained Luebbert. There had been chatter on various Stapleton Facebook groups about the incident, with some Jews sharing that they were apprehensive to put menorahs out this year. Stapleton community members, however, refused to stand by and watch that happen.

As more and more people began joining the effort, Luebbert took an organizational role, working with a designer at Chabad of Stapleton to create a menorah poster that both Jews and non-Jews could hang in their windows over the Chanukah holiday. Some residents, Luebbert included, even purchased candles or electric menorahs to put on display alongside the posters.

“The anti-Semitic vandalism in our neighborhood was horrifying,” she says. “I’ve seen displays of hatred like that on the news, but to have it in my own neighborhood is too personal. We’re hoping to drown out one incident of hate with many acts of kindness.” 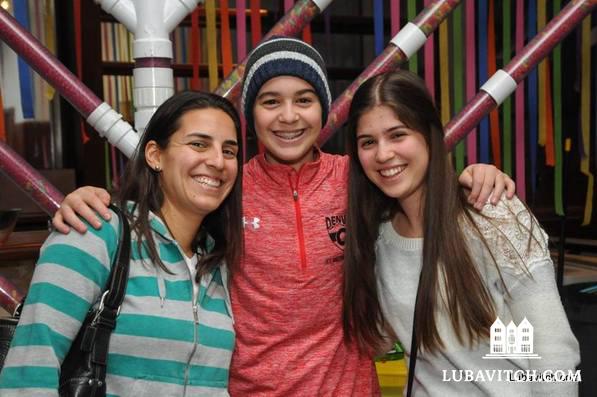 Roughly 100 people have publicly announced plans to join so far, but Luebbert expects many more will hop on board as news of the project spreads. “The feedback has been fantastic,” she shares, adding that about ten neighbors have volunteered to help get the project off the ground, in addition to four local businesses that have offered to act as distribution centers for the posters. The poster has been made available on the center’s website for download, significantly lowering the cost of the project as volunteers bear the cost of the printing.

“The solidarity and love that has been expressed from all our Stapleton neighbors has been extraordinary,” says Estee Popack. “We are very blessed to live and to raise our children in a neighborhood that comes together as a community like this.” The Popacks, who moved to north Denver in March of 2013 to serve Stapleton’s Jewish population, say that they’ve only experienced inclusiveness and unity in the neighborhood, along with respect for their Jewish identity.

Community member Lauren Ross, who has always observed the holiday of Chanukah along with her husband and two children, says her family will be especially proud to light the menorah in their front window this year. “The menorah project is a beautiful and meaningful response to this incident of hatred. It has provided an outlet for Jews and allies to rally together in a peaceful and loving way to express that these acts will not be tolerated in our community,” she opines.

In response to the original anti-Semitic incident, and in display of public unity, solidarity, and religious freedom, the Chabad Jewish Life Center announced that a public menorah car parade will take place on December 27th. The parade will begin at the Isabella Bird Community School, travel through Stapleton, and culminate at the annual public menorah lighting.

Stapleton United Neighbors (SUN), the Stapleton community association, is partnering with the Popacks for the community’s first annual menorah car parade. “Chanukah’s message resonates powerfully with the fundamental principles of American life, as our nation was founded on the principles of hope and religious freedom,” SUN wrote in a statement. “SUN encourages community participation in the Unity Parade and the Festival of Lights/menorah lighting as an opportunity for all members of the Stapleton community (Jewish and non-Jewish) to celebrate the principles of religious freedom and the victory of light over darkness, freedom over oppression, and justice over ignorance, intolerance and bigotry.”

To download a menorah poster or learn more about the parade, visit www.JewishStapleton.com.