Chabad of Mequon, WI changes up their shul decor—and their approach to mitzvahs 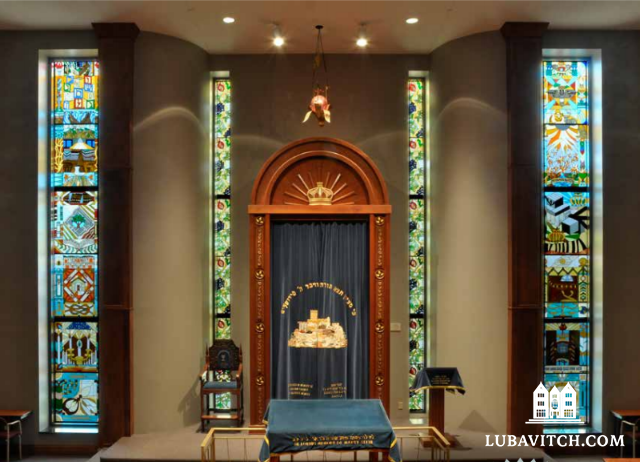 It was a hot August morning in Mequon, Wisconsin, when Rabbi Dovid Rapoport completed the Shacharit services in the Peltz Center for Jewish Life’s Chamoy Family Sanctuary and gently closed his siddur. “I don’t mind leading services,” the senior Chabad emissary joked, shielding his eyes against the sunlight streaming across the synagogue, “but some stained glass windows would sure be nice.”

The rabbi meant it in jest, but for congregant Bernie Newman, the casual remark struck a chord. “For the first time, I looked at that soaring expanse of light and understood that there may have been an unrealized plan to install stained glass windows,” he reminisces.

An idea began to take shape. “When Bernie shared his idea of sponsoring this project to honor our parents, I immediately agreed,” recalls Newman’s wife, Patricia. “When we moved to Mequon twenty eight years ago, the people in this community opened their hearts and their homes to us and made us feel like family. This was a great opportunity to give back in a beautiful, meaningful and long-lasting way.”

The Newmans approached the rabbi, offering to sponsor stained glass windows for the sanctuary—and to further sweeten the deal, they proposed that their daughter Inbal, a 22-year-old illustration major, would come up with the design.

The rabbi was enthusiastic. In fact, he told the Newmans, the sanctuary had originally been designed with stained glass windows in mind. The Newmans would now complete the vision for the synagogue.

Together with Rabbi Menachem Rapoport, executive director at Chabad, Inbal came up with a theme: the windows would portray the mitzvah campaign of the Lubavitcher Rebbe, a ten-point program that focuses on raising awareness and observance of fundamental Jewish practices such as kosher and tefillin. Each of the twelve windows would represent a different point, with two windows dedicated to the concepts of writing a Torah scroll and “Moshiach: Live it Now,” respectively.

Inbal invested hours of research into every aspect. “Each topic presented a fresh new design challenge, not only in how to suggest incredibly abstract or incredibly straightforward ideas, but also how to design the imagery so the materials will do the work of enhancing the message, instead of fighting with the design,” she explains.

Rabbi Menachem Rapoport connected Inbal with Brooklyn-based Chabad artist Michoel Muchnik, who advised her on the use of imagery in Jewish art. “It was really a big moment to see all the symbols and ideas unfold and come together,” Inbal shares.

But designing the windows was only half the work. Enter Russ Christiansen, a retired contractor whose daughter Janelle is a member of the Mequon Chabad center. Rapoport allocated a classroom in the Chabad center to be used as a studio, and Christiansen, a glass artist by hobby, set himself to executing Newman’s designs.

The event, which has been held almost every year since Rabbi Dovid and Faigie Rapoport established the Chabad branch in 1982, was centered around the sanctuary’s new installation and its theme, ‘Windows to Redemption,’ which, says Rabbi Menachem Rapoport, “represent the fundamental teaching of the Rebbe to hasten the Redemption through the performance of mitzvahs and study of Torah.”

“The idea is to increase awareness of the mitzvahs, and encourage people to observe them in their own homes,” the rabbi explains. A fund will be established for each one of the mitzvahs “so that we can help make them more accessible to people.” Chabad also published a booklet explaining each window and its coordinating mitzvah, along with the background and significance of each.

“What started as an art project became an inspiration for reviving enthusiasm and excitement in these mitzvahs,” Rapoport says, noting that since the installation of the windows, congregants have become interested in the campaign.

Inbal Newman is proud of the final result. “Each finished window is more beautiful and meaningful than the last, and I can’t wait to see them up in the shul for years to come.”

To learn more about Chabad of Mequon, visit www.chabadmequon.org.