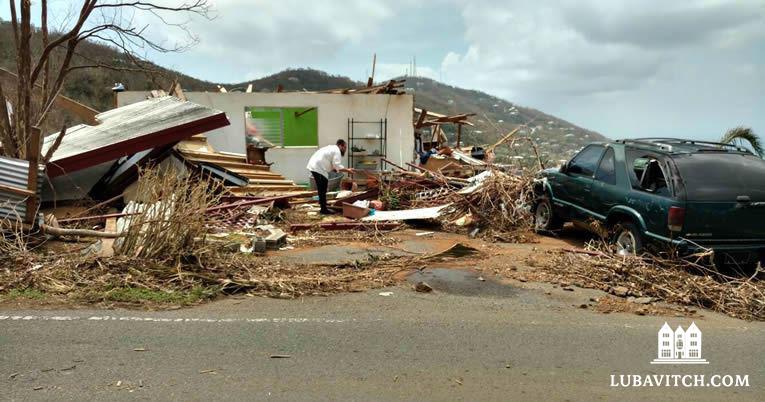 It’s been nearly a week since Hurricane Irma smashed through St. Thomas in the U.S. Virgin Islands on September 6, and Chabad Rabbi Asher Federman is making the rounds, surveying the damage as he speaks by phone.

His words are garbled. “The devastation here is beyond description,” he is saying.

The small island has been utterly destroyed. Hospitals, post offices, and shopping centers are no longer standing. Homes have been ruined, possessions lost, and nearly seventy percent of the power poles have snapped. “There are areas of the island that are completely unrecognizable,” Federman describes. One community member drove home after the storm, only to get confused when she arrived at her street: she thought she had made a wrong turn.

“There’s debris everywhere,” and after almost a week of working, the main roads have been cleared enough to let cars through—but it will be an estimated four-to-six months before power is fully restored.

Chabad has not been spared. The Chabad House, which also serves as a home for Federman, his wife Henya, and their nine children, was damaged after the rooftop of a resort located nearly half a mile away blew into the front section of the structure. “It snapped like matchsticks,” the rabbi says grimly. Chabad’s synagogue location downtown has been flooded, and the roof of their cheder was partially blown off. Still, Federman is thankful for what counts: “Thank G-d, we have the ability to help people.”

The rabbi and his assistant Rabbi Mendel Galperin have been working around the clock in the aftermath of Irma, checking up on individuals who need assistance, contacting family members abroad for those who don’t have service—reaching out to more than a hundred people in what the rabbi says were “very emotional” phone calls—and organizing evacuations, debris removal, and deliveries of basic supplies.

“Food is a major issue,” notes the rabbi, who has been subsisting on crackers and canned goods. “We’re working to bring a shipping container of canned food and non-perishables from Florida.” Additionally, Chabad has been coordinating a boat shipment of supplies from Puerto Rico for a local senior care facility, as well as a load of generators that they will sell at cost-price. Students will soon be arriving from Puerto Rico to help clear dangerous debris.

The island is in crisis, but the disaster is bringing out the best in people. “Anyone who has any way to help others, is doing so,” Federman observes. Private individuals are running their boats back and forth between St. Thomas and Puerto Rico, a two-and-a-half hour journey, bringing evacuees—who carry little more than personal bags—to safety. Today, Chabad helped a number of tourists secure spots on two cruise ships that evacuated some 6,000 stranded visitors from the island.

In a way, the crisis has energized people, and Chabad of St. Thomas is gearing up for Rosh Hashana full throttle. Young rabbis are arriving to assist with the holiday programming, which, Federman believes, will draw new faces—and more people than ever before.

“In times like these, you learn the true value of life… it’s almost like what happened to your house and possessions is secondary,” he muses. “You’re happy you’re alive, and what really matters in life is at the forefront of your mind.”

In fact, he says, in the days since Irma struck, “no one turned down a mitzvah, no one said no to putting on tefillin or hanging up a mezuzah.” It’s a time of “strong spiritual bonding… an unfortunate but deep experience for everyone in the community.”

With Chabad’s generator down, the rabbi is unsure where the Rosh Hashana services will take place, but he’s unperturbed. “If we can get the generator up and running, it will be at the Chabad. If not, we’ll find a different space—but it’s definitely happening.”

With all community members accounted for, the real work is only just beginning. “Everyone is getting their lives together, figuring out how they’re going to live for the next couple of months,” the rabbi says. “We’re going to need help to rebuild.”