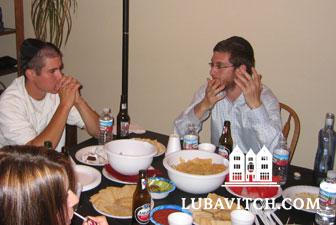 Before the ink dried on a free trade deal between U.S. and South Korea, a first-time ever import arrived in Seoul: two young Chabad rabbis. They came to find Jews and help them reconnect with their heritage. The same factors that powered the economic diplomacy are what attract businesspeople from around the world, Jewish ex-pats and travelers among them.

And where there are Jews, there’s Chabad – especially in the summer.

Since about 1946, young Chabad rabbis have spent their summer breaks on “Merkos Shlichus,” traveling off the beaten path to reach and teach Jews in the hinterlands. This year, 330 newly ordained rabbis and rabbis-in-training, mostly in their twenties, traveled off to 160 locations around the globe. Their suitcases are filled with Jewish prayer books, mezuzah scrolls, and guides to Jewish rituals for beginners. They’ve rented cars and Mapquest-ed their routes. They may look the part of itinerant rabbis, but as Chabad’s worldwide scope has evolved so has their mission.

“This program is truly illustrative of Chabad-Lubavitch in action at its most basic level,” says Rabbi Moshe Kotlarsky, Vice Chairman of the Lubavitch educational division. “It’s about finding Jewish people in real spiritual wastelands, and connecting with them in a way that opens up a whole new world for them.”

Each summer, international Jewish outreach bites an estimated half-million dollar hunk out of the budget of Merkos Linyunei Chinuch, Chabad-Lubavitch’s education division. Actual costs are many more times that. Individual Chabad representatives lay out their own funds to cover expenses that exceed the grants from headquarters. Furthermore, if the 330 rabbis were not an all-volunteer force, the cost of the program would climb into the multimillion-dollar range.

The economic burden is willingly endured, if only because of people like Joel Evans of Sun Valley, Idaho. Last summer, Schneur Lifshitz and Moshe Silberstein came across Joel on their journey through the resort town. Joel revealed that he had never had a bar mitzvah. Schneur and Moshe gathered a quorum and a Torah, and hosted Joel’s belated Jewish milestone. Schneur, a point man for the Merkos Shlichus program whose traveling-rabbi stints have taken him to Nigeria, Turkey, Bosnia, Estonia, Grenada, Germany, and Russia, returned to Sun Valley this year.

“One-time, spontaneous encounters are an important part of Merkos Shlichus, but building on friendships and renewing contacts enriches the experience for everyone involved,” Schneur said. He’s also looking forward to seeing how another Idahoan, Mike Ausman, is doing with the pair of tefillin Chabad helped him acquire in the winter.

“Putting on tefillin is my way of connecting with G-d every day,” said Mike. “I am very fortunate to have crossed paths with Chabad.”

Further north, in British Columbia, Canada, Rabbi Yitzchok Wineberg, Chabad’s senior representative in Vancouver, charged his two Merkos Shlichus volunteers with a scouting mission. Simcha Zajac and Yisroel Kotlarsky will be scoping out a Belgium-sized area of B.C. known as The Interior. Official censuses of the lake, mountain and vineyard laced region set the number of Jewish families living there somewhere in twenties, but the Jewish community has a list of 70, and the pair who have been there last year and are returning this year, met some 100 Jews there last summer, and maintain that the count is higher.

Last year, the two went through the phonebook in search of Jewish sounding names, but one of their most memorable experiences happened at a gas station in West Bank, B.C. A woman named Yvonne spotted them and thumped on their window. The daughter of traumatized Holocaust survivors, Yvonne generally kept her Jewish identity cloaked, but Simcha and Yisroel had turned up right around the anniversary of her father’s death. Yvonne took it as a sign and approached the pair with an innocuous question about memorial candles. Later, Yvonne wanted to know more about Jewish approach to the afterlife, and the question grew into a sustained conversation.

“Merkos Shluchim get a close up, door to door view of the regions they visit. They reach Jews that the statistics overlook,” said Rabbi Kotlarsky, explaining that this program "endeavors to send Chabad rabbis to every community where there is, as yet, no full time Chabad center."

Before leaving on their summer tours, the rabbinical students participate at a full day seminar led by Chabad outreach veterans who address relevant concerns, such as making the most of out one-time encounters and strategies for handling potentially polarizing topics.

“Every speech was practical as well as inspirational,” said Simcha Zajac. Also new for this year, a website with sample Torah class materials and a guide from veteran Merkos Shluchim with how-to’s on car rental, dealing with the local press and a list of kosher travel friendly food necessities. Armed with information, enthusiasm, a love for fellow Jews and a nose for adventure, the 330 Merkos Shluchim are set to make their presence felt around the world this summer.