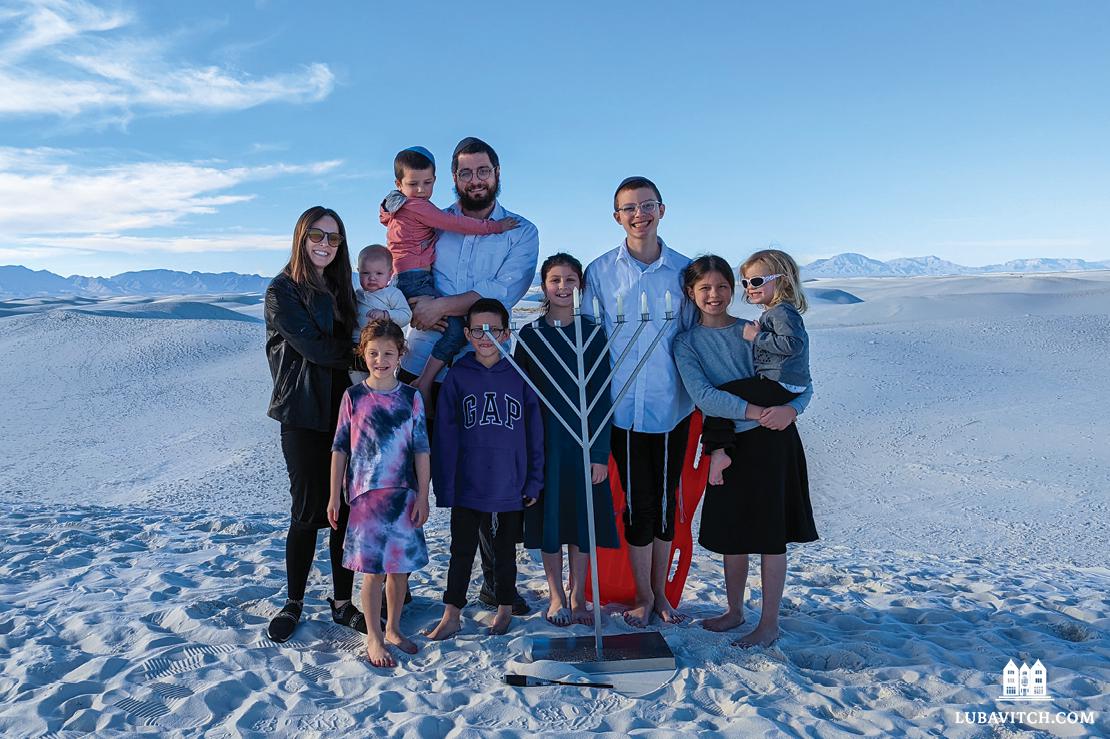 A Chabad couple puts their gift for leadership, friendship, and partnership to work, enriching the Jewish community of Las Cruces, NM.

Marty Poel is not a fan of organized religion. As for his late wife, Elissa, the traditional mechitzah separating men and women in the shul was anathema to her feminist convictions.

So in 2009, when the long-time residents of Las Cruces, New Mexico, heard that Chabad was coming to town, they didn’t rush to lay out the welcome mat. “My feeling was that this community wasn’t big enough,” Marty remembers.

Indeed, the community isn’t big. Most of Las Cruces’s residents are retired. Only a few young families have moved there in recent years, primarily attracted by its stunning views, affordable housing, vibrant arts scene, and three-hundred and fifty days of sunshine. With its small Jewish population and a small Reform congregation, Las Cruces seemed ill-suited to a Chabad presence.

The rabbi and his wife were still getting settled when they were called about a Jewish woman 115 miles away, in Silver City, who had passed away. Her nephew from Houston, Texas, wanted Chabad to provide her with a Jewish burial.

Rabbi Schmukler arranged to have the woman transported to a local Las Cruces funeral home where her body was prepared with a tahara (ritual cleansing for burial). But when it came time to say Kaddish at her gravesite, the rabbi was one man short of a minyan. ”I called a local Jew whom we didn’t know too well at that point,” says the rabbi. “He was friendly, so we asked him as a favor to be the tenth man.”

The local Jew was Marty Poel. He and his wife had just returned from a cross-country RV trip, but Marty graciously rushed over. The deceased woman was laid to rest as the minyan recited Kaddish according to the Jewish tradition.

The rabbi was grateful. Marty and Elissa were won over. “There was something about this rabbi,” says Marty. Something that made Marty and Elissa join Chabad’s services the following Yom Kippur. “He is a breath of fresh air. He’s not didactic. He doesn’t tell anyone what to believe. We have wonderful conversations. Something about him made me change my perceptions about Chabad.”

In a small town like Las Cruces, the likability factor makes a huge difference. Fortunately, Rabbi Schmukler — known in town as “Bery”— and his wife, Chenchie, are blessed with great personalities. And like Marty and Elissa, other locals warmed quickly to the Shmuklers.

“They are well networked,” observed Robert French, Executive Director of the Jewish Federation of Greater El Paso, in a phone interview. Speaking warmly of the productive partnership between Chabad of Las Cruces and Jewish El Paso, French noted their “creative and innovative” leadership. “We may not see eye-to-eye on everything, but Bery and Chenchie are beacons of light. They live Torah values. They are positive and tolerant of different streams. The future of Jewish life here is strengthened by their leadership.”

Chabad and the Federation partner on various projects to enrich the Jewish community. One of them is the preparation and delivery of Kosher-for-Passover dinners for the city’s 450 Jewish seniors. And in recent years, the Federation has partnered with the annual free Chanukah concert that Chabad hosts every year in the downtown plaza, attracting as many as one-thousand locals.

Kathy Foster had never heard of Chabad when a small ad in the Sunday paper caught her attention: Chabad of Las Cruces was hosting a Menorah-building workshop at the local Home Depot. It would be a positive Jewish experience for her son who was turning five. So, one wintry afternoon, in the back of aisle eleven, the Fosters donned orange aprons and created wooden menorahs with other local Jewish families.

“I didn’t know what Chabad was or that there were Jewish opportunities in town,” recalls Kathy, who had been living in Las Cruces for ten years at that point. Never in that decade had she encountered another Jewish person. Meeting the rabbi and his wife, she says, “changed everything for us.”

Soon after that illuminating Chanukah, Kathy signed her son up for Chenchie’s Aleph Art Room Hebrew School. In the years since, her two younger children have also joined the city’s only Jewish school. Its methodology resonates with Kathy, who is an elementary school teacher: “Whether they’re teaching Bible verses, holidays, or Hebrew letters, they come at each lesson from so many different angles. The kids have a lot of fun learning and creating, and they even pass their learning on to friends. A lot of kids here have never heard of Jews or Judaism, so that is really meaningful.”

A Hebrew school, a summer day camp, and a host of holiday and educational programs founded and administered by the Shmuklers have infused Las Cruces’s Jewish community with vibrant life, disproportionate to its size.

“It makes no sense that such a small community could sustain the kind of Jewish infrastructure we now have here,” observes Chenchie. The couple is as astounded by these developments as anyone else, and they humbly attribute their achievements to what they call “lots of small miracles.”

Las Cruces is also home to the White Sands Missile Range, where Ilan, a former IDF soldier and an Israeli employee of Rafael Industries, coordinates a unique U.S.-Israeli alliance. There, Israeli engineers and technicians train American soldiers on the Iron Dome system and practice life-saving techniques themselves. “Israelis come here for a prolonged time. The work is hard, the day is long,” Ilan says. Discovering Chabad in Las Cruces, where they meet other Jews and enjoy the Moroccan food Chenchie will make for them, is uplifting. “The food, the joy, and the songs really break up the harshness of work on the base,” Ilan adds. “It helps morale all around.”

As a chaplain for the local Secret Service, the Sheriff’s office, and the local police department, Rabbi Schmukler counsels individuals and focuses on the very real challenge of suicide prevention. “These agencies give so much to all of us, I am so happy to give back to them,” he says.

The Schmuklers reach every demographic, from professors and students at local universities, to Las Cruces’ large senior population — among them some who haven’t stepped out of their homes since March of 2020. “If we can’t have them as guests at our home,” Chenchie says, “at least we can bring the excitement of Shabbat to theirs.” Chenchie whips up enormous batches of challah on Thursday mornings and sends them — together with soup, a side, and a sweet treat — to homebound seniors. Accompanied by a small bottle of grape juice and a set of candles, these Shabbat packages deliver love and the knowledge that someone cares.

When Covid hit, they coordinated a drive-by stock-up offering essentials like toilet paper, hand sanitizer, and masks. Cars lined up for blocks as Chenchie and Bery handed out provisions to anyone in need.  And, in an effort to help people who lost their jobs during the pandemic, Chabad started a financial relief fund. The Covid stock-up also inspired a new annual tradition: every Thanksgiving, Chenchie and her crew of volunteers cook and package hundreds of traditional kosher meals for all.

Several times a year, Bery visits some thirty Jewish families dispersed across outlying cities. That means driving to Lordsburg, 120 miles west of Las Cruces, and as far as Roswell, 200 miles away. “Some of these families will occasionally come to spend Shabbos or Jewish holidays with us. Some send their children to our day camp.” And when major Jewish holidays come around, the Schmuklers arrange for Chabad rabbinical students to travel to these outlying communities to help organize and lead services.

Their hard work has earned a great deal of notice in the community. Bery was recently chosen as a local hero and featured prominently in the Sun News. And in late January, Chenchie was chosen as a “Mesilla Valley Outstanding Woman of the Year” in the local Bulletin. Neither Bery nor Chenchie knew about their respective honors in advance. The rabbi only learned of his selection when a photographer came to snap his picture. Chenchie heard of hers when she received an intriguing email one morning.

It was from a secret admirer named Jill Begemann — a woman she had never met. Begemann attended Chabad’s Chanukah lighting in 2019 but stayed in the shadows that night. The former restaurateur followed Chabad’s activities over the ensuing two years without getting more involved. Until now.

“When I heard about the Bulletin contest, I thought of her,” says Begemann, who had kept tabs on Chenchie’s classes and events. She sent Chenchie an email introducing herself and alerting the Chabad leader of the nomination. “It was a no-brainer that she would be picked,” insists Begemann. “She wears so many hats and exudes so much grace and happiness in each of them.”

With her decades of professional experience in the food industry, Begemann hopes to get involved with Chenchie’s kitchen — the only address for anything kosher in the city. “It’s one thing to produce so much food. It’s an entirely different thing to create such high quality,” Begemann says in admiration.

Years ago, on Marty’s first Yom Kippur with Chabad, the rabbi asked all the congregants to share a few words and talk about what brought them to shul that day. “When you called me to help say Kaddish for a woman you had never even met in your life, it blew my mind,” Marty said.

It’s been years since Marty’s “eyes were opened to Chabad” by the Schmuklers. Emerging from a recent JLI class on Jewish meditation, he says, “Bery is a teacher. A wonderful teacher who lives by example and goes far beyond being rabbi. Outdone only by his wife, Chenchie, they draw people who come to them for education and Yiddishkeit. And every milestone in the Schmukler family becomes a community event. It is so cool.”

Organized religion, he admits, still gets under his skin. “But I will do anything I can to support Bery’s and Chenchie’s work.”

Related Articles
View All
Community
Jeff Brought Chabad to Guelph, Now It Carries His Name
This July, on Jeff’s yahrzeit, the Dr. Jeff & Lisa White Chabad of Guelph was dedicated in his honor
Community
Nourishing Souls in Laguna Niguel One at a Time
One person at a time, a small California community outgrew their existing space. Now they purchased a new 12,000 square foot building to house Chabad…
Community
Paris, Mexico, and Gresham, Oregon
After bumping into Chabad rabbis around the world, Jack Skiterman knew he had to reach out to the new Chabad couple in his own Oregon…
Community
Starr’s Yahrzeit Project
“It’s so personal, it touches people profoundly. And it creates a deep sense of community.”
Get Inspiration to your inbox!
Newsletter
Join our weekly newsletter for inspiration and updates
Donate
Find Your Local Chabad Center
Subscribe
|
Log In
Chabad
About Chabad-Lubavitch
About Chabad Lubavitch
The Rebbe
Headquarters
Magazine
Magazine
News
News & Updates
In The Media
Impact
Social and Humanitarian
Social and Humanitarian
Education
Education
Community
Community