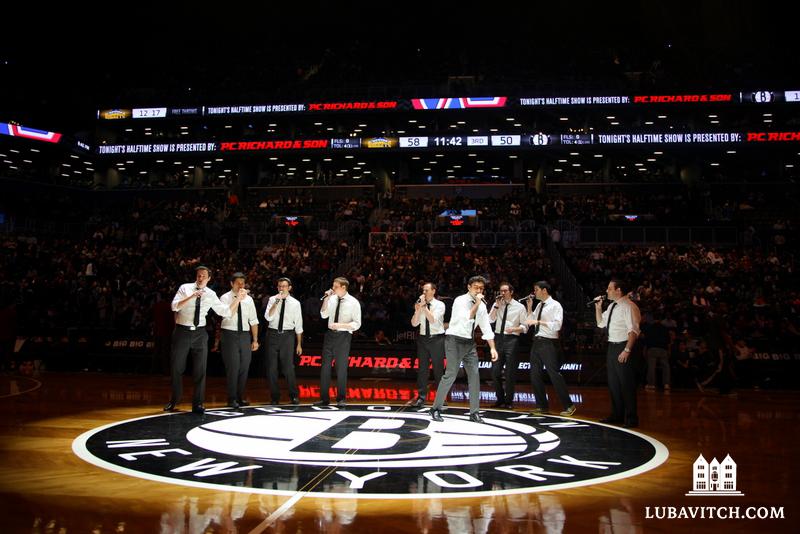 It’s not often that fans leave the stadium smiling after the home-team faces a crushing loss. But despite the Brooklyn Nets’ loss 111-87 against the Denver Nuggets in Brooklyn’s Barclays Center, Tuesday night, young Jews from across the greater New York Metropolitan celebrated their own win.

One of many Chanukah celebrations held at major sporting events around the nation, Jewish sports fans had a chance to celebrate their heritage in the public arena. Organized by CTeen, Chabad’s network for Jewish teens as part of a special initiative to engage young Jews over the chanukah holiday, the event drew 1500 young Jews and their families.

In addition to the public kindling of the menorah by Elias Rosner, a CTeen member from Woodcliff Lake, New Jersey, the 19,000 spectators as well as TV audiences around the country, were treated to a number of Jewish themed events. Chasidic singer Benny Friedman led the evening with the national anthem, and during halftime, the Maccabeats entertained the crowd with a special Chanukah performance.

“Teens love sports. We want our teens to understand that being a sports fan, celebrating Chanukah and being proud of your Jewish heritage can all go hand in hand,” said Rabbi Mendy Kotlarsky, director of CTeen’s executive committee.

For many of the teens from the 34 CTeen chapters participating in the event, Jewish participation is oftend reserved mainly for the synagogue and home.

“Tonight, we wanted to show everyone how Judaism can be accessible even during our daily lives” explained CTeen’s director Rabbi Shimon Rivkin. “When a teen stands in the high five line, proudly wearing his yarmulke while greeting NBA players, it gives him the pride to wear his Jewish identity no matter where he is.”

Riding back to Hewlett, Long Island in a menorah decked limo, 14 year old Adam Jaffe said, “the night showed that we are one [people, that as Jews] we all support each other.”