Site of New Hebron Neighborhood Was Purchased By Chabad In 1909 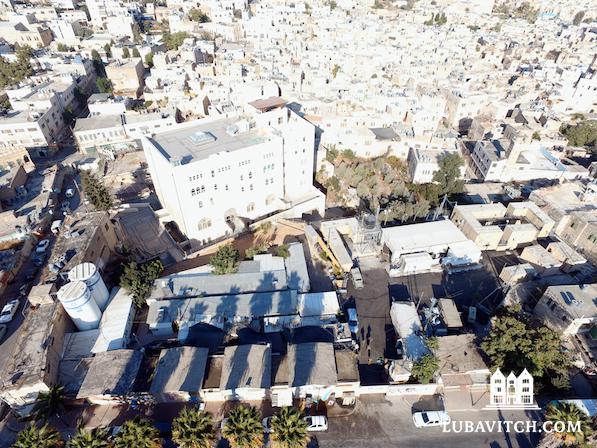 All News
By Mussi Sharfstein , Hebron

The Israeli cabinet this week approved the establishment of a new neighborhood for Jewish residents of Hebron. The decision gives Israelis living in caravans permission—a first after sixteen years—to build new homes in Hebron.

Lubavitch.com confirmed that the 99,000 square foot lot of the new neighborhood was part of a parcel of land purchased by Chabad in 1909.

Chabad’s rich history in the ancient city dates back to 1823 when Chabad families were sent by Rabbi Dov Ber, the second Rebbe of Chabad, to live in the City of the Patriarchs. Over time, Chabad acquired more land in Hebron, built synagogues and educational institutions and supported local families with donations sent from the Chabad communities in Russia.

In January 1909, the fifth Chabad Rebbe, Rabbi Sholom DovBer Schneersohn (known as the Rebbe Rashab), purchased Beit Romano, a mansion and its surrounding courtyard, located in the heart of the Hebron Jewish community for 22,000 silver rubles—10,000 of that as the down payment. The estate was built by the Romano family, Jewish immigrants from the Kushta, in the Ottoman Empire, and in 1912 became the home of the Chabad Yeshivah Toras Emes. The land was further expanded with the purchase of an adjacent lot for 3,100 silver rubles, at the end of 1909. Though the local community was impoverished and the community in Russia under the Rebbe Rashab was not much better off, they scraped together the required sum to purchase the estate. The new neighborhood will be located in the courtyard, on the property behind Beit Romano, that was part of the original purchase.

The deed to the land, written in Arabic, registers ownership under the names of the Rebbe Rashab and his son, the sixth Chabad Rebbe, Rabbi Yosef Yitzchak. Under Ottoman law, foreign citizens were barred from owning property in Palestine but the Rebbe saw to it that the property’s ownership was eventually recognized in 1913, under the Schneersohn name.

Rabbi Danny Cohen, Chabad representative in Hebron, said, “Though the city went through tumultuous times and passed through multiple hands, this land was owned by Jews without interruption since 1909.”

The yeshivah in Beit Romano was active in Hebron until 1914 when the Ottoman Empire, then at war with Russia, seized the property and expelled the Russian-born students and teachers, turning the building into a police station and courthouse. 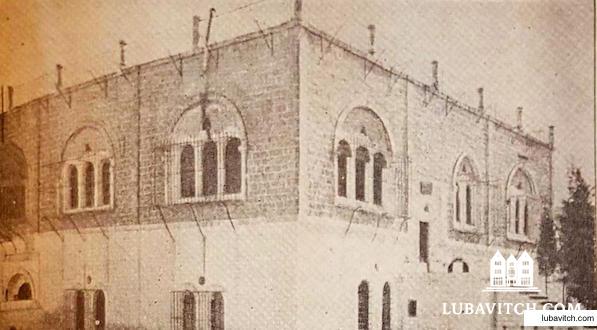 After WWI, the British Mandate took control of the station at Beit Romano and the rest of Hebron. In 1929, British police stood idly by as local Arabs massacred the city’s Jewish residents who were asleep in their homes. The Chabad community of Hebron was later expelled by the British with the rest of the city’s Jews and most of them relocated to Jerusalem where the Yeshivah started up again and is active until today.

Though Hebron was now empty of its Jewish residents and properties were being sold to Arabs, Beit Romano was never up for sale. Many who feared the end of Jewish life in Hebron approached Rabbi Yosef Yitzchak, urging him to sell off the land and recoup his investment, but the Rebbe insisted on holding on to it. It remained vacant until local Arabs took up residence there and in most of the other Jewish-owned sites.

In 1948, the Jordanians took control of the area, allowing for an Arab girls’ school to open in the building and installing a central bus station on the property. The station was later relocated after Hebron was liberated during the Six Day War.

After a terrorist attack killed a yeshivah student nearby in 1980, the Israeli government returned the building and its surrounding land to Jewish hands. A local Yeshivah, Shavei Hebron, moved in, and an Israeli army base was built on the land. During renovations to Beit Romano in the late 90s, another floor was discovered under the structure and two more floors were added giving a total of five stories to the building today.

According to the Israeli government, an IDF base which now sits on the site will be downsized to allow for thirty-one homes, two kindergartens, a daycare center and a public park in the Hezekiah Quarter of Hebron.

“One hundred and ten years since Chabad purchased this property, it’s beautiful to see it once again being used for what it was originally intended,” said Rabbi Yehuda Krinsky, chairman of Chabad Lubavitch Headquarters.

In a conversation with Lubavitch.com, director general of the Jewish community of Hebron, Uri Karzen, expounded on the details of the planned construction. “We’re grateful that the Rebbe Rashab had the foresight to purchase the property so that its Jewish provenance remains undisputed to this day.” 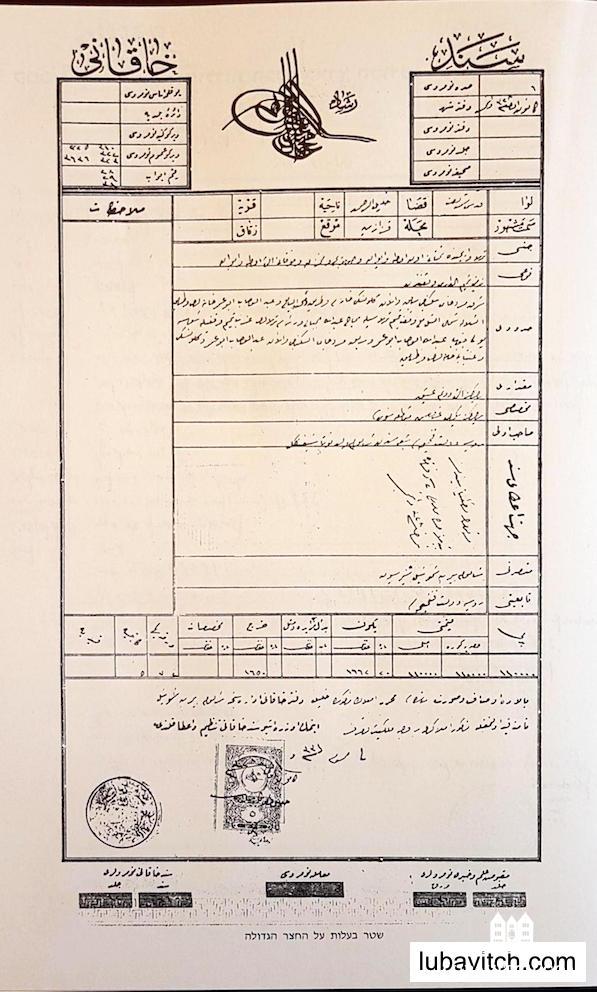 The deed to the land, written in Arabic

1929 – Hebron massacre and expulsion of community to Jerusalem

1948 – Jordan takes control of Hebron; Beit Romano becomes a girls’ school and a bus station is built on the property 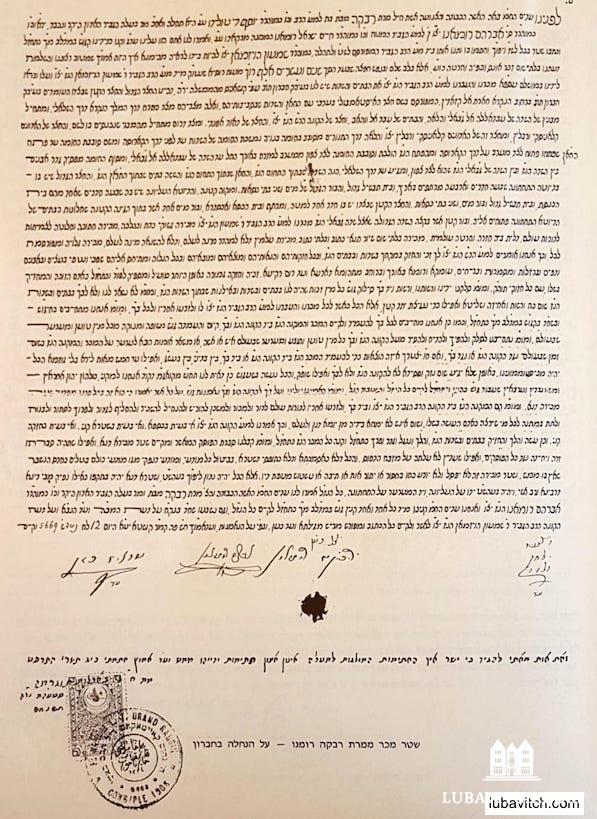 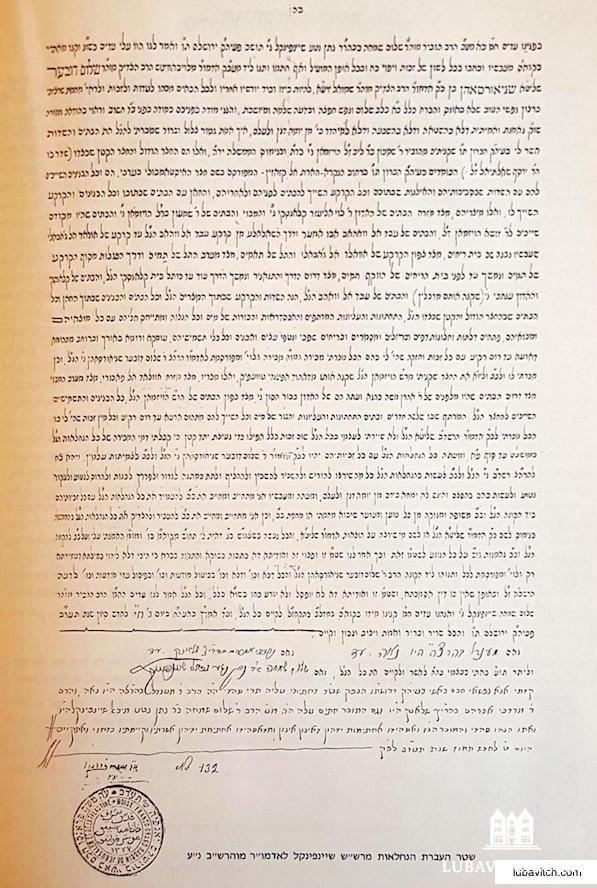 Transfer of ownership to Rebbe Rashab

Related Articles
View All
A Jerusalem Landmark: Chabad’s Tzemach Tzedek Shul
(lubavitch.com) Visitors to the Jewish Quarter of Jerusalem’s Old City are often moved by the sight of the Hurva Synagogue. Destroyed by the Jordanians in…
80 Years After Massacre, Baby Named For Hebron Matriarch
On that fateful day, thousands of bloodthirsty Arabs carrying knives, hatchets and pitchforks rampaged through the streets of Hebron hunting Jews for slaughter.
Get Inspiration to your inbox!
Newsletter
Join our weekly newsletter for inspiration and updates
Donate
Find Your Local Chabad Center
Subscribe
|
Log In
Chabad
About Chabad-Lubavitch
About Chabad Lubavitch
The Rebbe
Headquarters
Magazine
Magazine
News
News & Updates
In The Media
Impact
Social and Humanitarian
Social and Humanitarian
Education
Education
Community
Community