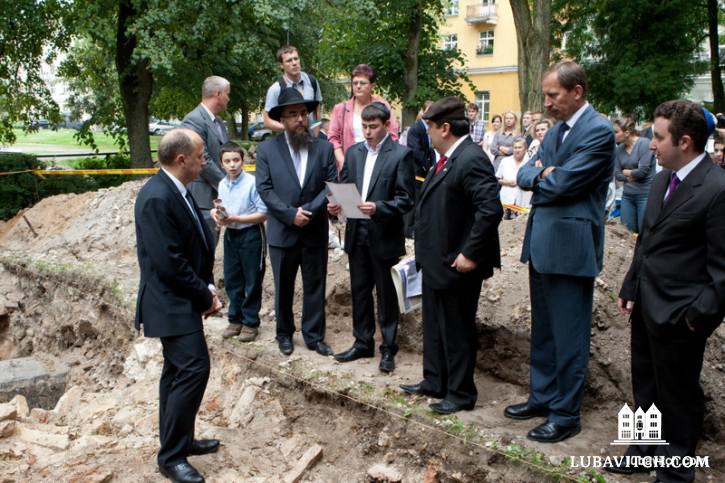 All News
By Lubavitch.com , Vilnius, Lithuania

The site of the Aron Kodesh, or Holy Ark of The Great Synagogue of Vilnius dating back to the end of the 16th century, was recently uncovered in the excavations of this historically significant synagogue. Lithuania’s Prime Minister Andrius Kubilius visited the site Friday to view the synagogue’s excavated fragments and attend as 25 Jewish Lithuanian students of the local Beis Menachem school prayed there.

Also uncovered was a part of the original floor, and the top of one of the four pillars surrounding the bima of the Great Synagogue—a magnificent renaissance structure in this once great Jewish center of Torah study, widely known as “Jerusalem of Lithuania.”

“This is a very emotional discovery for us here and allows us to make a bridge to our authentic past,” Emmanuel Zingeris, Member of Parliament and President of the project to restore the Jewish quarter of the old town of Vilnius told lubavitch.com. “We now have the precise spot where the holiest part of the Synagogue stood, and it is under open sky.”

Partly destroyed by the Germans during WWII, and fully demolished by the Soviet authorities in 1955-1957, these findings are some of the first after efforts to unearth and restore the Synagogue began earlier this summer, under archeologist Zenonas Baubonis.

Part of the synagogue sits under buildings constructed by the communists—including a large building that is now a kindergarten—and will be difficult to get to, explained Zingeris, and is what makes the discovery of the site of the Aron Kodesh unobstructed, precisely matched to drawings and photos of the synagogue’s interior, especially exciting.

Out of respect for regulations that forbade a synagogue building to stand taller than a church, the synagogue was constructed on a deep foundation with its floor well below street level, to allow for an interior height of five stories. The synagogue was of such magnificent architecture, Napoleon is said to have stood at the door of the structure in 1812 in stunned admiration.

Chabad-Lubavitch representative to Lithuania, Rabbi Sholom Ber Krinsky, who led the students in prayer, said: “Holiness transcends time. To pray on this place today 60-70 years after this great shul was destroyed by the Soviets, is a triumph for every Jew.”

The excavations are part of a broad effort sponsored by the government, initiated during this year to restore the old Jewish quarter of Vilnius, and includes digs to uncover some of the eight smaller synagogues in the area.