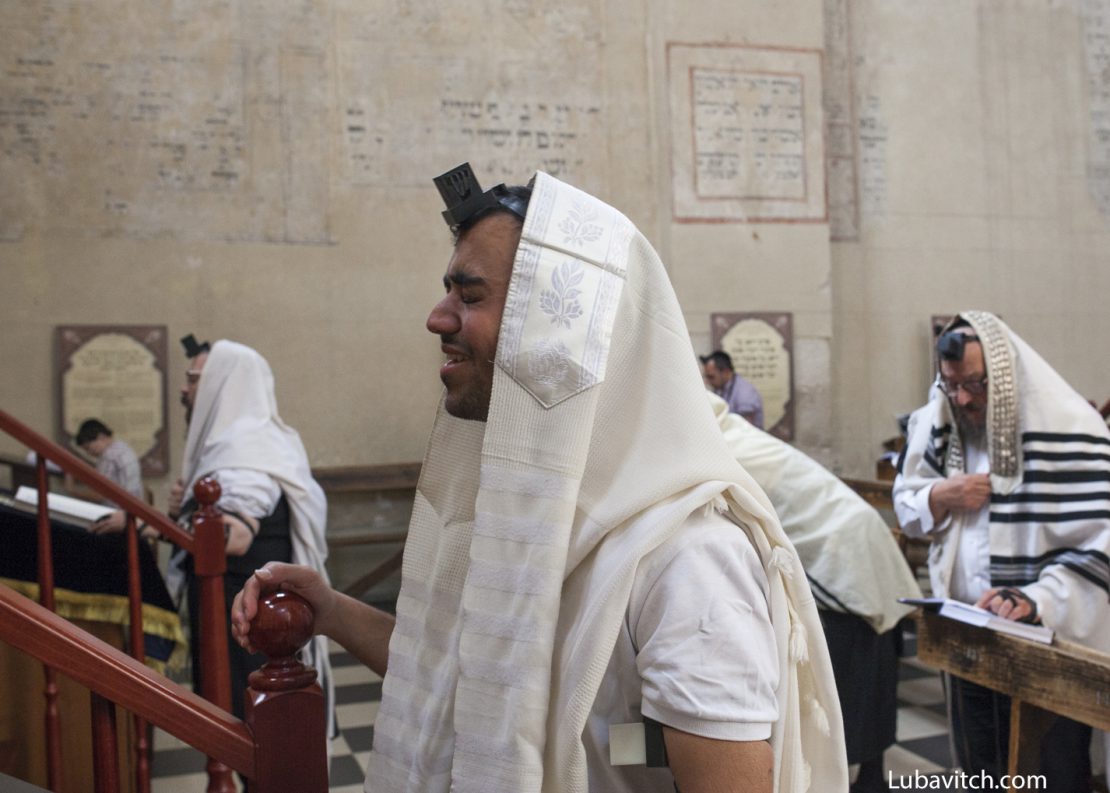 Congregants pray at the “Izaak Synagogue” in Cracow, Poland (est. 1644)

A great, merciful king once announced that he would grant his subjects whatever they desired. Many people came with requests, some asking for silver and gold, others for prestigious jobs and titles. But there was one wise man who asked the king for very little. All he wanted was permission to speak with him three times each day. The king was delighted to learn that this wise man valued his company above riches and prestige. So he decreed that just as this wise man would have access to the king, he would likewise have access to all the king’s coffers. (Toledoth Yaakov Yosef)

These days, beginning with Rosh Hashana and leading up to Yom Kippur, are days of prayer—the most intimate expression of faith in G-d. The practice has been cultivated by Jewish people over centuries. Indeed, Chasidic lore is rich with anecdotes about individuals who have lived their lives in perpetual conversation with G-d.

We know that prayers emanating from the heart can have a profound impact. And when offered collectively, the impact is greater still. Our sages tell us that merely answering “amen” in shul has the power to shift forces on high, not only for the benefit of the participants, but for the world at large.

But we now hear a lot about shrinking participation in services. Many millennials don’t relate. Ritual prayer often lacks spontaneity. Synagogues can be intimidating. More and more pews are empty, and the pressure is on to ratchet up the numbers: Jazz up the services, replace them with social events—a concert, a barbeque, a workshop. By whatever means, draw a crowd.

There is a “synagogue crisis” at large, and Chabad is not unaffected. Chabad rabbis and rebbetzins do draw crowds to their community events. Their teen programs are full. Young professionals pack the house. Shabbat dinners and adult educational courses are well attended. Jews are engaging with us, and often in impressive numbers.

But that’s not davening.

The synagogue—where we come together to pray—is traditionally the grandest edifice in the community, and Chabad certainly has its share of beautiful synagogues. But davening doesn’t require stained glass windows, great acoustics, or plush seating. It doesn’t need a president, a board of officers or a cantor with a shimmering falsetto.

For the purposes of prayer, the shteible is just as good. A makeshift shul, a shteible is typically a spare space outfitted with some worn wooden benches and a Torah ark nailed together by the local carpenter. Humble and altogether unfussy, the haves and the have-nots, the scholars and the simple folk feel equally at home in the shteible. Here the straggler can always find a late minyan, the mourner an “amen” chorus for his Kaddish.

Simple shteible or soaring sanctuary, it’s about finding a space to speak the language of the soul. It’s about the exquisite expression of that still small voice within, calling out to connect with the Infinite. It is about offering our deepest thoughts, our fears, and our hopes—as individuals and as a community—to the One who listens.

Jewish education and social events are important. Chabad does very well in this area and could leave well enough alone. But it is not about to let the practice of davening disappear. In the September issue of Lubavitch International you’ll read about how Chabad works to bring men, women, and children into the shul, struggling at times to overcome enormous obstacles (Woodcliff Lake p.18) and trying to make the experience as inclusive as possible (mechitzah p. 16, shofar p. 9).

We do want to see millennials get into the habit of prayer and join a community of others who, like the wise man in our opening parable, understand the power and cherish the privilege of talking to Him—as often as three times a day. How expansive and elevating for the modern Jew to have the skills to practice this ancient form—to argue with G-d as Abraham did, to plead with him as Hannah did, and to sing to him as Devorah did.

May the resonance of these prayerful days carry us through the new year with sustained blessings. Shana tova u’metuka!