Shining a Light in Pittsburgh 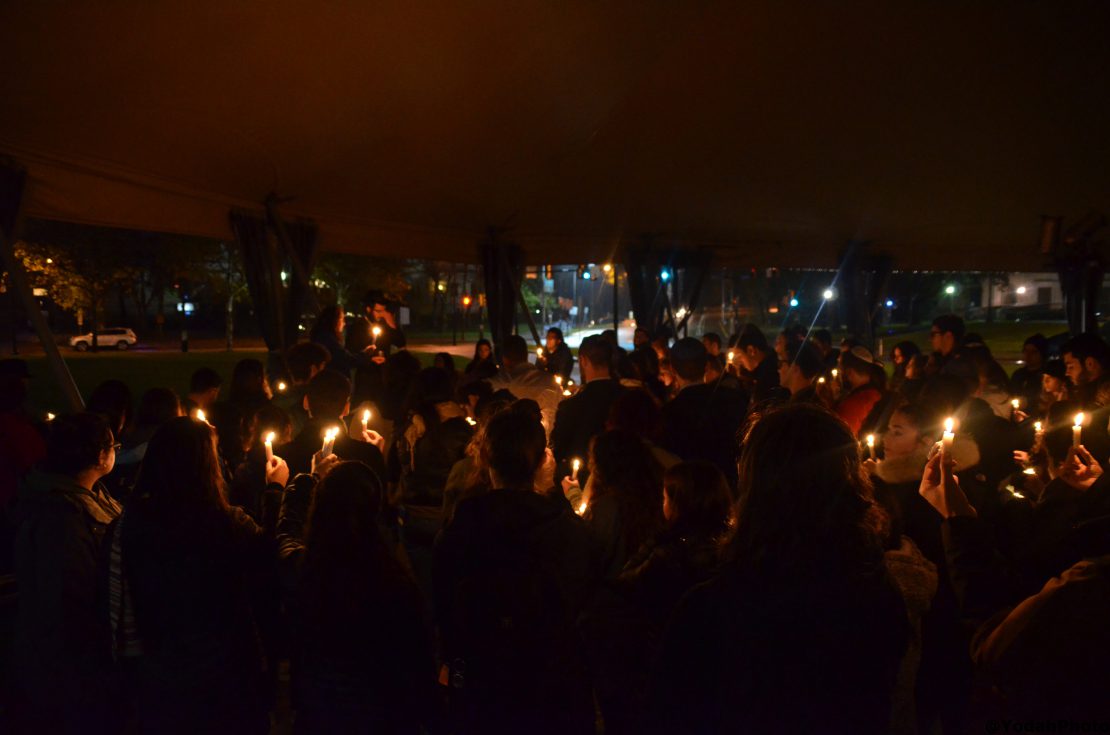 All News
By Ashira Weiss , Pittsburgh

As Shabbat ended, Chabad centers around Pittsburgh began to react to the tragic shooting at the Tree of Life Synagogue, this morning. Eleven people are said to have been killed, and six injured. The synagogue is in Squirrel Hill, a neighborhood with a large Jewish population and many synagogues and Jewish schools.

Shabbat services were ending at the Chabad-Lubavitch Center of Pittsburgh, when Rabbi Yisroel Rosenfeld heard news of the shooting. Members there gathered to recite psalms and pray for the safety of their community. The Rabbi walked to the local JCC where the families of the Tree of Life congregation had begun to assemble. “We are in a state of shock,” he said. “They have not released the names, but the beautiful thing about Pittsburgh is the unity among all parts of the community.”

Rosenfeld addressed an impromptu, cross-communal vigil, held this evening, outside the Tree of Life Synagogue. Together, they lit memorial candles, sang Jewish melodies and recited prayers. Inside, the chevra kadisha (Jewish burial society) was assisting authorities with the bodies of those slain.  “Our job, as Jews is to keep making sure the world is a better place,” he said, encouraging attendees to “add in goodness and kindness, no matter how difficult is the situation.”

At Congregation Shaare Torah, a synagogue located mere blocks from the Tree of Life, Chabad rabbi, Eliezer Shusterman serves as associate rabbi. The synagogue, packed with around five hundred congregants celebrating a bar mitzvah, went into lockdown, as they listened to emergency vehicles racing by.

“Some of our members are also members at Tree of Life, so we are interconnected,” Shusterman said. “This will only cause our communities and the wider community, to come together, stronger.” His wife Chana said they checked in with some of the members they know. “Thank Gd, they are ok, but many will be attending at least two funerals tomorrow. This pain is personal,” she said.

Chabad House on Campus’ director Rabbi Shmuel Weinstein said their centers on all nearby campuses were providing support for students affected. He attended a havdalah memorial ceremony at Chabad at Pitt on the University of Pittsburgh campus. “We chatted with students, some who have been to services at Tree of Life. Our hearts go out to them. We encouraged them to generate light.” In this vein, candles were passed out before the ceremony began. As over a hundred students sang the prayers that marks the end of Shabbat, Rabbi Shmuel Rothstein, Chabad at Pitt director, enjoined them to “think of a way that they could be a light that would dispel the darkness of their surroundings.”

A student who had celebrated her Bat Mitzvah at the Tree of Life lead a prayer for the injured, and Senior Vice Chancellor, Dr Kathy Humphrey encouraged the group to “continue to keep their hope strong, so that tomorrow, we’ll see a better day.”

Weinstein shared that at the event, students and Rabbis resolved to hold a morning prayer service on campus on Sunday, followed by a bagel breakfast. There will be tefillin available for students to don and charity boxes for those who’d like to commit to dropping in a few pennies each day. “The idea is that this tragedy, predicated on hate, should spur us to add in good deeds and acts of kindness.”