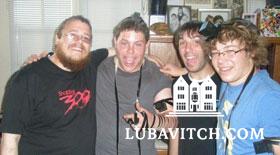 Rabbi Wagner with students doing the mitzvah of tefillin before Shabbat begins.

Editor's Note: This week, Chabad on Campus is hosting its annual national Shabbaton at Lubavitch Headquarters in New York. Hundreds of students from universities in North America will get the entrenched  Chasidic  Shabbat experience  as is possible only in a community like this one.

Some students say they wait all year long for this weekend. In fact, two of the student evacuees at USDS made sure to pack their clothing for the Shabbaton. Evacuate they will, but, said Rabbi Chalom Boudjnah, Chabad rep to USDS, “not before making sure they took what they need so they would not miss this experience of Shabbat with a Chabad community in NY.”

With the prevalence of Chabad student centers on campuses nationwide, a development of recent years made possible by the Rohr Family Campus Initiative, the Chabad-hosted Shabbaton has become a fixture of the Jewish student experience.  There are  campus-specific Shabbatons from New York to San Francisco,  and regional Shabbatons enough to keep students Shabbat-happy all year long.

Some arriving to New York on Friday are still humming “Jewish (Soldier) Boy”  from last week’s Shabbaton at Chabad USC. Here's a look at how this lively event unfolded:

Quadrupling its usual Shabbat dinner attendance, Chabad of USC had no choice but to put up a vast outdoor tent to accommodate all the students that participated at last week's Shabbaton.

That Shabbat300, as the event was dubbed, pulled in 270 Trojans is owed to student creativity and the tradition that sees Hillel and Chabad regulars dining together once a semester.  The mega event was more than a dinner, more than an attempt to see just how many bowls of salad and trays of cake it would take to satisfy a massive crowd, but a way to help the doubtful feel safe with Shabbat.

“Most students are reluctant to go to places where they do not know the people there, by getting so many people to participate, we hope it will build up the level of comfort necessary to participate,” said Rabbi Dov Wagner of Chabad at USC.

Or, as one of the student organizers Lara Bledin put it, “People feel safe getting lost in a crowd.”

In the past, the “Jewnity” event brought 110 students together for Shabbat dinner, but Jaydi Samuels, a senior, and Bledin, a sophomore, wanted this year’s event to be huge. Together with Rabbi Dov and Runya Wagner, they set a goal of 300 participants. Then Samuels and Bledin started bouncing ideas around for a theme that would up the excitement quotient and found inspiration in the goal number, 300, the title of a hit movie over the summer.

Utilizing ‘300’’s cache – picture lots of ancient Greeks in togas – the appeal to USC students,  20% of whom are involved in Greek life, was obvious. It also didn’t hurt that Trojans, the name of USC’s athletic teams, are huge in the Illiad.

Bledin and Samuels designed a logo with a slogan that echoed a line from the movie: “Tonight we dine in Jewnity.” Chabad advertised, broadcast news about the event on Facebook, and printed up Shabbat300 t-shirts, and the reservations poured in.

“In our quest to bring together Jews of all different backgrounds, Lara and I realized how important it would be to tie in pop culture to religious traditions,” said Samuels. “I find it absolutely incredible and heartwarming that something as simple as a popular movie and clever marketing allowed USC to come together that night to dine in Jewnity.”

Organizers overheard “See you at Shabbat300” as a coda to conversations across campus. For some, Bledin said, the event was their first Shabbat dinner since becoming a USC student.  Runya Wagner, who cooked the entire meal in just two days (“I’m used to cooking for 60 to 70 each week,” she said.), estimated 40% of the Shabbat300 participants were new faces. Hillel sponsored a table and their crowd came. Alpha Epsilon Pi, Sigma Alpha Mu and Sigma Delta Tau were partners and brought delegations to the event.

“The dinner brought together Jews from a wide range of backgrounds and commitments in a non-judgmental, meaningful milieu,” said USC Dean of Religious Life Rabbi Susan Laemmle. She attended the dinner because “I support groups cooperating, and I particularly like it when there is a Jewish event with unity at its core.”

Between courses, Shabbat spirit was in abundance. Students at the tables – named for Greek city-states – competed to see who could come up with a way to celebrate Shabbat. Students danced, started Shabbat songs, and morphed the song “Soldier Boy” into “Jewish Boy” with dance moves.

“It was pretty amazing,” said Runya. “I am proud we could do it.”