Searching for Jews Off the Beaten Path 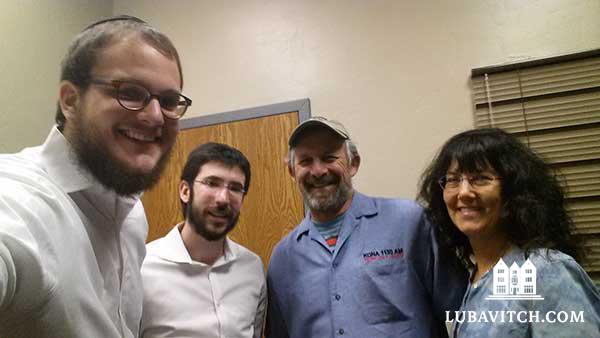 The tiny, high-desert town of Taylor, Arizona, could almost be from another era. There are a few fast food joints and high-speed Internet. But there’s no movie theater, no home postal delivery, no high school in this heavily Mormon town. And definitely no synagogue.

“But today, there are visitors: two Orthodox Jewish rabbis. They’re the first to say this isn’t the norm.”

Dubbed the “Jewish Peace Corps” by the press in the 1960’s, the program sends 400 hundred rabbinical students over the summer to remote villages in Ukraine, the Australian outback and the ABC Islands, looking to connect with Jews off the beaten path.

“We go to these places, and we try to just, you know, to bring a little bit of Judaism to their corner of the world,” Kaplan shared.

On this trip, the rabbinical students met Janice Schwed, and “her fat, friendly goat.”

Schwed told KJZZ that she and her husband, “Ira, were both raised observant Jews in California, but haven’t been religious for years. These days, they hardly have any Jewish friends. Even so, they’re fiercely protective of their heritage. In the decade they’ve spent here, Schwed has met plenty of Mormons and Jehovah’s Witnesses who have come knocking.

“But there’s nobody, there’s no religion in this entire, small six-mile town that is going to change the way that he and I feel about our background, our religion,” she said. “Because that’s ours.”

To learn more about the program visit RovingRabbis.com.