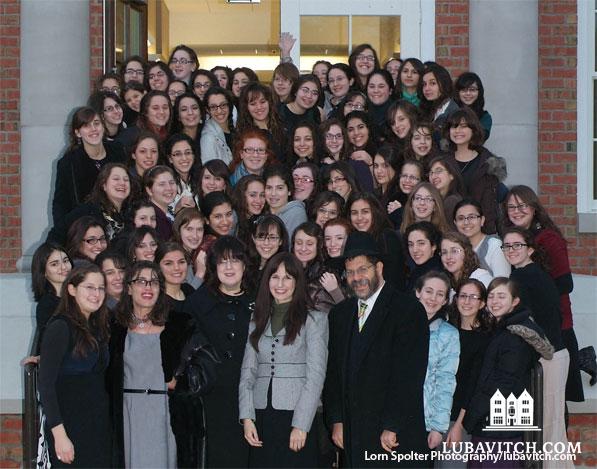 (lubavitch.com) Residents of historical New Albany, Ohio will soon welcome the Lori Schottenstein Chabad Center for a Jewish Tomorrow, a stately Georgian structure located in the heart of the quaint village.

Named for benefactor Lori Schottenstein, the $5 million building sits on a sprawling 11 acres and will cater to the Jewish community of the Columbus metropolitan area.  The new building includes a synagogue with seating for 150, a social hall of equal size for community and holiday programs, classrooms for the Chabad Hebrew School, and Life Town, an indoor city where special needs individuals practice basic life skills through role play.

“We began our work in New Albany in 1998,” says Rabbi Areyah Kaltmann, who directs Chabad in Columbus, Ohio together with his wife, Esther. “One day, I walked into the office of a Reform Jew by the name Herbert Schiff. He threw me out of his office, telling me to get with the times, and that New Albany has secular community. He laid down a challenge and told me I would never succeed in this community.”

Kaltmann persisted, and the unlikely pair soon struck up a close friendship. Schiff became a key supporter of the nascent Chabad center and Chabad of Columbus became an important fixture of the local Jewish community. Rabbi Levi and Aviva Andrusier settled in a nearby suburb and now direct the Chabad Hebrew School, Camp Gan Israel and offer a variety of classes for adults.

“People will naturally feel more comfortable in the new building because of its dignified location in the center of town,” Rabbi Andrusier points out. “The new building will afford us tremendous growth and opportunity.”

Because New Albany is an architecturally controlled community, obtaining the necessary approvals to commence building took three years. Realtor Danny Rosen consulted with Rabbi Kaltmann and helped him navigate the issues related to the building process.

“Because of its central location in the community, it was essential that the Chabad House demonstrate that the structure would protect the integrity of a master plan community,” Rosen explains. “Aside for the architectural sense, there were also issues like foot, motor, and bicycle traffic regulations, storm water management and other considerations.”

One hundred stones lie beneath the Ark in the Lori Schottenstein Chabad Center, symbolic of the stones that the patriarch Jacob rested on while fleeing from his brother Esau. According to the Midrash, Jacob returned to the stones while en route to an encounter with Esau years later, to draw strength and hope. In New Albany, members of the Chabad House will be able to have their names engraved on one of the stones in honor of important lifecycle events. These stones will remain a source of strength and vitality for these individuals to return to in the future.

After experiencing early setbacks with the property, Rabbi Kaltmann enlisted the help of Ohio developer Yaromir Steiner, CEO of Steiner and associates and a close friend and supporter. A devoted Catholic, Steiner keeps a picture of the Lubavitcher Rebbe in his office. He deeply reveres the Rebbe, he says, and believes that anyone who puts G-d in the center of their lives deserves to be helped.

“Chabad owned two parcels of land that were not contiguous, so I helped the Rabbi make an exchange with the church that owned the property that Chabad needed so that everyone was happy,” he said.

Life Town, which will be completed in early spring, is a simulated indoor city where special needs children and teenagers learn basic life skills through doing everyday activities like making bank withdrawals, scheduling appointments at the dentist and watching movies in a theater; they buy tickets with real cash.

Esther Kaltmann, director of Columbus Friendship Circle and Life Town says the new village has been modeled after the only other Life Town at the flagship Meer Family Friendship Center in West Bloomfield, MI. Sixty schools from across the state participate in the Life Town, with middle through high school students attending every day in groups of 50. The new facility, Esther Kaltmann says, “will enable us to get more done and will draw more students to our new location.”

Caroline Raya, 21, has Down syndrome. Though the student volunteers who befriended her when she first joined the Friendship Circle eight years ago have since moved on to college, Caroline’s mother, Arlene, says they still stay in touch with her and have created true and lasting friendships. Caroline graduates high school in June, and she plans on working at Life Town after graduating.

“The friends that Caroline made over the years were all well matched, and she is very happy,” says Arlene. “Now Caroline will be able to give back when she starts working at the new Life Town. We are very excited.”