School’s Out, Chabad Campus Emissaries In For Annual Conference 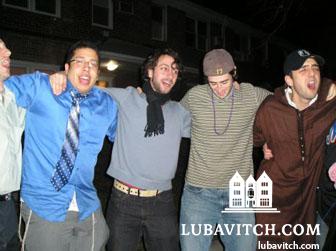 Students celebrate at a Chabad-on-Campus event.

(lubavitch.com) Esther Stein began her religious journey in Lima and continued it in Brooklyn where she studied at a women’s yeshiva. During her time in America, Stein’s mentor, Rabbi Uri Blumenfeld, kept in touch with her and her teachers, gave her money to purchase warm clothing for the cold New York winter, visited regularly, and introduced her to her future husband.

“Here was a rabbi who was so busy with his own community and family,” recalled Stein, “and yet he helped me in such a critical time. I was wondering who would help me, and there he was.”

Now a Chabad representative herself, Stein is devoted to each of the Jewish students and graduates at the University of Stony Brook. At the 7th annual Chabad on Campus Convention, she told her colleagues, “Show you care. Keep in touch. It really made such an impression on me.”

These and similar sentiments were heard at last weekend’s conference attended by 220 Chabad on campus emissaries from 110 schools in five countries. Amidst a backdrop of towering mountains and rolling golf courses, these men and women shared four days of camaraderie in Ellenville, New York.

Although 90 percent attend the larger conventions (aimed at all shluchim) in the winter, organizer Rabbi Levi Margolin explains that this conference is unique. “This is geared specifically towards campus issues. There is so much they can gain here that is completely unique to this gathering.”

Nechama Rothstein serves the 900 Jewish students of Vanderbilt University in Nashville, Tennessee. “Campus is different from other types of community work,” she says. Rothstein grew up on a campus and in her two years at Vanderbilt has amassed an impressive breadth of know-how. And yet, she says, six months after last year’s conference, she was still calling presenters for tips and reminders.

“As Rabbi Yossy Gordon [Executive Vice President of Chabad on Campus] said, ‘we share the same experiences; we have the same scar tissue. We understand each other’s challenges.’”

A new website, geared to college students and graduates, was unveiled during the retreat. The site will showcase a large sampling of compatible young Jews, in a pool accessible only to their sponsoring campus shluchim.

“Studies have shown that 70 percent of Jewish marriages today are interfaith,” stated Yehudis Bluming at Duke University. “If there is any place to prevent that, it is Chabad on campus. We have the most amazing tool: networking.”

This was Rabbi Mendy Lent’s second year at the convention; last year he attended a month before he set out to his new position at Nottingham University in England. Some words of advice he heard then—“we’re building people, not programs”—have served as his modus operandi all year.

“Last year I was inspired to hear that programs don’t have to be big to be successful,” Lent offered. “This year I am motivated to do more, to increase performance.” Within the 08-09 scholastic year, Lent went from hosting five guests on a Friday night to an average of 25 for Shabbat dinner.

Just as each campus has its own motto and mascot, each Chabad campus couple has their unique way of connecting with students. At a roundtable discussions and seminars during the weekend, colleagues exchanged notes.

Mrs. Sarah Rivkin says that students at Tulane love being a part of her children’s lives. She shares details of their antics with them and genially passes her baby around to welcoming arms. At Stanford, Mrs. Rachel Greenberg noted that interest and enrollment skyrocketed with monthly Shabbat dinners for individual graduate schools. Mrs. Goldie Gansbourg, who recently began serving the Jewish community of City College in Harlem, told her younger peers, “I am not cool, I am not hip. I am not young. But the kids come for whatever you are.”

Sometimes, it is the little things that attract students. One new student was impressed that the rabbi bought his wife flowers every Friday; another appreciated that her campus rebbetzin always looked beautiful and well groomed, notwithstanding her endless responsibilities and consuming schedule, at home with the children and on campus with the students.

Ultimately, it is, as Rabbi Moshe Kotlarsky, Vice Chairman of Chabad's educational division, described it, "the sense great responsibility for each individual Jew, that defines a Chabad emissary," and that makes a difference to the student. "The Rebbe didn’t accept 99.9 percent. He insisted that every Jew has to be reached and touched," and this, he maintained, is the challenge for Chabad emissaries on campus.

Today, Chabad-on-Campus offers students a rich and varied menu of sophisticated educational opportunities developed specifically to their interests. For students drawn to Jewish life on campus for the social aspects, Chabad campus centers are a hub of lively social opportunities that never slow down: around the Shabbos table, during every Jewish holiday, at year-end bbq’s, annual Chabad-organized trips to NY or Israel, and international campus Shabbatons.

The idea, say campus representatives, is to expose Jewish students to a rewarding, exciting and meaningful Jewish life experience. And no matter how diverse the campuses are, no matter how unique the interests of each student may be, Chabad-on-Campus has successfully made its point:  There’s something here for everyone.

Related Articles
View All
Education
Jewish Day Schools Make The Grade
Amid a national discourse about the transformation of America’s school system in the wake of the pandemic, Jewish day schools are enjoying an unexpected boost:…
Education
Ckids International Crowns Australia’s First ‘JEWQ Champion’
Ethan Ickowiz from JEMS Bondi, NSW is the new JEWQ Champion. Ckids International crowned Ethan “Ultimate JewQ champion of Australia” at the JEWQ grand finale…
Education
A Quiet Moment
It is a typical, bustling morning at a middle school in Camarillo, California, and the students are about to take an algebra quiz. But first,…
Education
Remembering Rebbetzin Chana: Jewish Feminine Role Model
Rebbetzin Chana Schneerson, a feminine role model of Jewish activism and proponent of Jewish scholarship, mother of the Lubavitcher Rebbe and wife of Rabbi Levi…
Get Inspiration to your inbox!
Newsletter
Join our weekly newsletter for inspiration and updates
Donate
Find Your Local Chabad Center
Subscribe
|
Log In
Chabad
About Chabad-Lubavitch
About Chabad Lubavitch
The Rebbe
Headquarters
Magazine
Magazine
News
News & Updates
In The Media
Impact
Social and Humanitarian
Social and Humanitarian
Education
Education
Community
Community