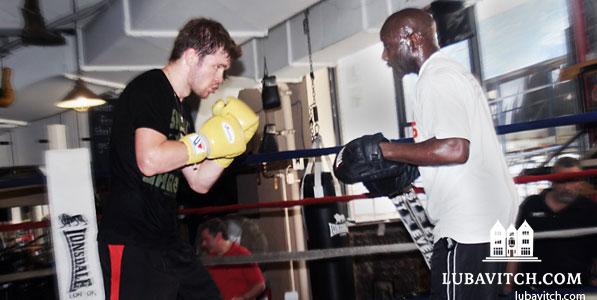 Foreman, born in Gomel, Belarus, learned to box at the young age of 7.

When some schoolchildren called him “Jew” and beat him during swim class, his mother grew concerned for his safety and enrolled him in boxing class at the gym.  Later, at the age of 10, he moved to Israel and continued his training at a local Arab gym.

“The first time I walked in, I saw the stares. In their eyes, there was a lot of hatred. But I needed to box; and boy, did they all want to box me,” Foreman said in an interview with JTA. After winning a few national boxing championships, Foreman, at the age of 19, moved to Brooklyn, New York to continue his boxing career.

Foreman, a Yarmulka clad observant Jew, is part of the IYYUN Chabad community in Brooklyn.  He wears Tzizit, and wraps Tefilin daily. He is also studying to become a rabbi and hopes to be finished within three years.

This Saturday night, Foreman will enter the ring to the voice of the Lubavitcher Rebbe singing Psalm 63:1-3. The recording will be of the Rebbe singing Tzama Lecha Nafshi-“My soul thirsts for You”(G-d).

Foreman and his Rabbi, DovBer Pinson, pay a visit to the burial place of the Lubavitcher Rebbe before every fight.