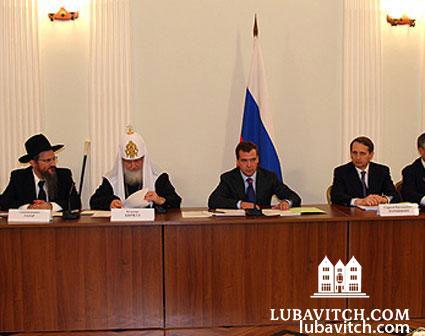 (lubavitch.com) When Russia’s President Dmitry Medvedev met several months ago with leading representatives of his country’s major religious faiths, one of the items on his agenda was the development of a course on religious education for elementary state schools.

The result is a new six-volume series on Orthodox Christianity, Islam, Judaism, Buddhism and two additional volumes on the history of world religions and secular ethics.

Come September 2010, The Foundations of Jewish Culture, as the Jewish volume is named, will be delivered along with the other volumes, to 4th and 5th grade classrooms in 19 regions of the State. The 95-page textbook offers an authentic review of Judaism including an introduction to Jewish spiritual tradition, the foundations of faith, the Exodus from Egypt, Jewish holidays, traditions and customs.

It’s a dramatic shift and a first for the country’s elementary school children since the rise of communism nearly a century ago, when state education denied students exposure to religious studies.

“Religion was altogether in another world when I was growing up,” says Andrey Glotser, an aide to Rabbi Berel Lazar and a member of the team who worked on the Jewish volume. Glotser graduated from Russia’s State University of the Humanities in 1980, under communist rule. “This is an amazing victory for democracy.”

Barely one percent of the public school children who will be using the book are Jewish. All the more important then, says Russia’s Chief Rabbi Lazar, for the Jewish child who may find himself a minority in his class. “The idea that a Jewish child is offered by his teacher the option of exploring his heritage gives the student who may otherwise feel outnumbered and isolated, an important sense of legitimacy.”

“We tried to make the material simple and accessible so that it would be understandable for children from Jewish families, as well as from other faiths,” says Glotser, who worked with Mikhail Chlenov, a Professor of Jewish Studies and the Director of the Euro-Asian Jewish Congress, and Galina Mindrina, a teacher at an Ohr Avner school in Volgograd, under severe time constraints to complete the volume.

Rabbi Lazar says the new course reflects a general shift in Russia’s attitude towards religion. “Russia has made a 180 degree turn away from its anti-religious doctrine.” He points to Prime Minister Vladimir Putin’s recent decision to lend government support to the construction of the Jewish museum in Moscow, a project of the Jewish community, as an example.

“The government has proven a genuine desire in taking real steps to correct communism’s biggest mistake—which was to remove G-d from life.”

Originally resisted by church-and-state separationists, the initiative offers students the freedom to choose from among any of the six courses corresponding with the volumes, including the one on secular ethics.

Though Rabbi Lazar admits that the majority of the school children will probably choose the course on secular ethics, he insists that the benefit to the students will eventually be appreciated in Russian society at large.

“The Lubavitcher Rebbe insisted that even in public schools, children need to be educated with an awareness of ‘an eye that sees and an ear that hears,’ instilling a sense of accountability for their actions.”

The course will run as a pilot program, with adjustments to be made after teachers evaluate its effectiveness.

Related Articles
View All
Russia’s President Medvedev: Government Should Not Interfere With Religious Life
(lubavitch.com) At a meeting Wednesday with religious leaders in Russia, President Dmitri Medvedev promised to instruct his staff and heads of security regarding policies of…
Get Inspiration to your inbox!
Newsletter
Join our weekly newsletter for inspiration and updates
Donate
Find Your Local Chabad Center
Subscribe
|
Log In
Chabad
About Chabad-Lubavitch
About Chabad Lubavitch
The Rebbe
Headquarters
Magazine
Magazine
News
News & Updates
In The Media
Impact
Social and Humanitarian
Social and Humanitarian
Education
Education
Community
Community