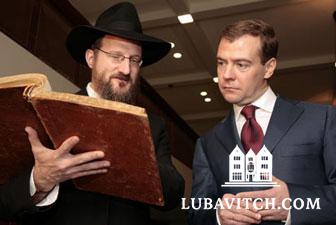 Russian President Vladmir Putin made public yesterday his endorsement of Dmitry Medvedev, a deputy prime minister and chairman of the state energy monolith Gazprom, during presidential elections in March.

Mr. Medvedev met last week with Russia’s Chief Rabbi Berel Lazar at the Marina Roscha Jewish Center in Moscow. Mr. Medvedev extended Chanukah greetings to members of the Jewish community, and then took a tour of the community center complex with Rabbi Lazar.

The two discussed the work of Chabad shluchim in the region, and prospects for the continued growth and enhancement of Jewish life in Russia.