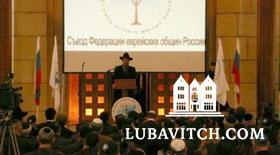 Rabbi Berel Lazar addressing the Fourth Congress of the FJC.

The Federation of Jewish Communities marked its 10-year anniversary during the Jewish umbrella organization’s  Fourth Congress this week. The occasion elicited warm greetings by Russian President Vladimir Putin, whose remarks were read at the two-day Congress:

"Today, the rebirth of the Jewish religious and spiritual life is continuing in our country. New cultural centers are being built, Synagogues are being opened, traditional holidays are widely being celebrated. And much of this is thanks to your authoritative organization,” the President wrote with respect to the FJC.

Much of it is also thanks to Putin’s government, which has consistently been supportive of the revival and growth of Jewish life in the country.

But that didn't stop Russia’s Chief Rabbi Berel Lazar and president of the FJC, speaking at the Congress, from decrying the possibility that his country’s government might decide to allow the Russian Orthodox Church to teach the principles of Christianity in all government schools.

"Children must not be compelled to study a religion different from their own faith,” he said, objecting even if the course is not compulsory.

In a phone interview with Lubavitch.com, Rabbi Lazar, who is also head Chabad-Lubavitch representative to Russia, elaborated: “The Church is pushing strongly for this, but we believe that if religion is taught in public schools, it must be done with full consideration for every child and their respective faith.”

There are an estimated 1.2 million Jews living in Russia, according to FJC figures. Approximately 40,000 Jewish children are getting some kind of Jewish education, leaving hundreds of thousands who do attend public schools, vulnerable.

Any child who is of a minority faith, maintained Rabbi Lazar, will likely “feel pressure from the religion that is taught at the school, mandatory or not,” should the government rule in favor of the church.

Despite the reticence of many leaders on the issue for fear of an anti-Semitic backlash, Rabbi Lazar insists that, his appreciation for the government’s help in fighting anti-Semitism notwithstanding, “We have a right to speak up against a move that we feel will be detrimental to the Jewish people.”