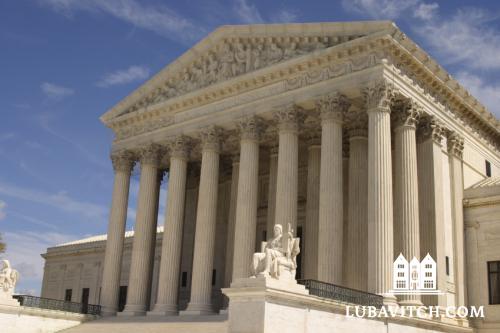 (lubavitch.com) In a surprise announcement filed with the federal court in Washington, D.C., on June 26, 2009, Russia declared that it has decided "not to further participate" in the much drawn-out case in which Chabad is seeking to recover part of its historic library.

After exhausting all diplomatic efforts over a 20-year period to bring its sacred books and manuscripts to the United States, where Chabad-Lubavitch has its international headquarters, Chabad sued Russia in a United States federal court in November 2004. Its objective is to recover more than 25,000 pages of original documents illegally transported from Poland to Moscow by the Red Army in 1945 and the movement's library seized in violation of international law by Bolshevik revolutionaries in 1917.

With the support of American Presidents beginning with Ronald Reagan, endorsed by unanimous resolutions of the United States Senate, and with the active support of Vice-President Al Gore, Chabad had obtained a series of promises from Russia's top leaders that these venerated documents and volumes would be restored to their rightful owners.

When the promises were not kept and litigation was the only available recourse, Chabad invoked American law and a recent Supreme Court decision concerning paintings taken unlawfully from Jewish owners during the Holocaust in initiating a lawsuit. The litigation was initiated by Marshall B. Grossman and Seth M. Gerber of the Bingham McCutchen law firm, and when the case was transferred to Washington, D.C., Nathan Lewin and Alyza D. Lewin of Lewin & Lewin, LLP, and W. Bradford Reynolds of the Howrey law firm joined as counsel.

The case is now pending before Chief Judge Royce Lamberth of the United States District Court for the District of Columbia.

In response to the federal complaint, Russia hired internationally renowned lawyers to argue in the United States courts that its refusal to return Chabad's property was permitted by international law and that American courts had no jurisdiction to hear and determine Chabad's claim.

On June 13,2008, the United States Court of Appeals for the District of Columbia unanimously agreed that the “Federal courts had jurisdiction and directed the District Court to proceed to hear evidence and decide Chabad's legal claims. That ruling became final when Russia chose not to seek review of this decision in the Supreme Court.

Having lost its jurisdictional arguments and with the case back in the District Court for further trial proceedings, Russia has now announced that its lawyers have been fired and it refuses to proceed any further.

In a statement issued by Alyza Lewin, one of the counselors representing Chabad in the case, Russia’s, “brazen statement that ‘this Court has no authority to enter Orders with respect to the property’ is a contemptuous slap in the face of the United States courts which squarely rejected the very legal position that Russia now asserts unilaterally.”

Ms. Lewin confirmed that Chabad intends to proceed with its claim for return of the priceless religious artifacts being illegally held by the Russians, as the American courts have determined it has every right to do.

“Whether or not Russia chooses to participate in the ongoing court proceedings, Chabad will seek the entry of an appropriate judgment and then proceed with enforcement of that judgment to recover, by all available legal means, its sacred property that is being unlawfully withheld from its adherents all over the world.”

Related Articles
View All
Judge Orders Russia To Report on Status of Chabad Library
(lubavitch.com) In the case of Chabad-Lubavitch vs. Russia, US District Court Judge Royce C. Lamberth today accepted Chabad’s request to deny Russia’s legal counselors release…
US Judge Orders Russia to Preserve Chabad Texts
[AP] — A federal judge is ordering Russia to preserve sacred religious documents that members of a Hasidic Jewish movement fear could be headed to…
Headquarters
Court Confirms Chabad’s Exclusive Rights To Flagship Synagogue At 770 Eastern Parkway
“Chabad-Lubavitch World Headquarters is gratified by the decision handed down last week by the Civil Court of the City of New York, confirming exclusive rights…
Headquarters
STATEMENT BY CHABAD-LUBAVITCH WORLD HEADQUARTERS
Every day that Jews are barred from entering the synagogue by armed guards is an unforgivable violation of the Jewish people!
Headquarters
Celebrating Radical Change With Chabad-Lubavitch
The banquet dinner, an elaborate, dramatic affair, is in itself no small nod to the challenge of radical transformation:
Headquarters
Hi Resolution: Annual Photo Captures Thousands of Faces
For some photographers, thousands of rabbis standing around the red ‘no standing’ sign outside Lubavitch World Headquarters are a dream; for others, a nightmare.
Get Inspiration to your inbox!
Newsletter
Join our weekly newsletter for inspiration and updates
Donate
Find Your Local Chabad Center
Chabad
About Chabad-Lubavitch
About Chabad Lubavitch
The Rebbe
Headquarters
Magazine
Magazine
News
News & Updates
In The Media
Impact
Social and Humanitarian
Social and Humanitarian
Education
Education
Community
Community